Weekly natural gas cash prices gave up ground amid mild temperatures and light cooling demand across much of the Lower 48. 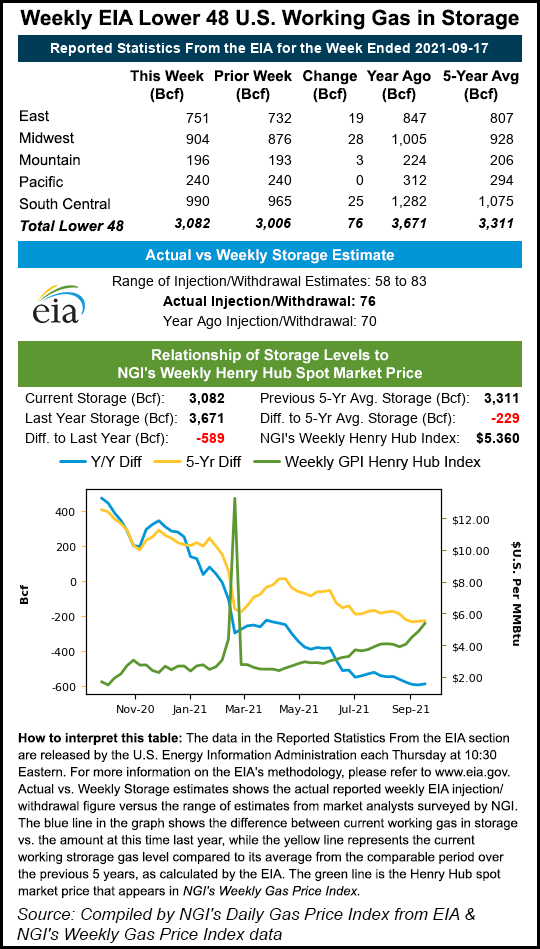 Temperatures moderated throughout the Midwest, East and parts of the western United States during the week, leaving comfortable highs in the 70s and low 80s across large sections of the country and minimizing demand for gas to power air conditioners.

As the trading week drew to a close, major markets from Chicago to New York City to Boston enjoyed peak temperatures in the 70s. Prices followed suit. Chicago Citygate dropped 52.0 cents to $4.680, while Algonquin Citygate lost 92.0 cents to $4.350 and Columbia Gas fell 80.0 cents to $4.140.

Hampered by fading demand, the October Nymex contract stumbled early in the week, but found its footing after Thursday’s government inventory report and then settled at $5.140/MMBtu to close the trading week on Friday, up 1% from the prior week’s finish.

Futures trading late in the week was driven more by potential supply/demand issues for the winter than the current early autumn conditions.

National demand was forecast to taper further in the week ahead and into early October as highs of upper 60s to low 80s spread across the Lower 48. Even parts of the far West, where triple-digit highs have been the norm for weeks, were expected to see moderating temperatures and lighter demand, National Weather Service forecasts showed.

“Weather, while still not a dominant factor, looks terrible for any demand, even with respect to the already low normal demand levels at this time of the year,” Bespoke Weather Services said.

“Very weak weather, not just now, but even into mid and late October, if not into early November, will increase headwinds in the market over the next few weeks, regardless of how the core winter months turn out,” Bespoke added.

Natural gas futures dropped lower on both Monday and Tuesday, as traders focused on the forecasts for waning demand. The prompt month broke even on Wednesday with markets awaiting the U.S. Energy Information Administration’s (EIA) weekly storage report.

EIA’s print on Thursday – an injection of 76 Bcf natural gas into underground storage for the week ended Sept. 17 – reminded anew that, for any lull this fall, winter looms large and supplies are lighter than normal ahead of the peak demand season – domestically and across Europe and Asia.

The latest build lifted U.S. inventories to 3,082 Bcf but left stocks well below the year-earlier level of 3,671 Bcf and the five-year average of 3,311 Bcf.

Refinitiv analysts forecasted that U.S. production would reach 95 Bcf/d for this winter, up from around 91 Bcf/d this month. At that level, the firm said, supplies should prove sufficient for domestic heating needs and continued strong levels of U.S. liquefied natural gas (LNG) exports to help meet demand in Europe and Asia.

That noted, production proved slow to recover from the pandemic, even as demand surged over the summer, and in recent weeks hurricane activity wreaked havoc in the Gulf of Mexico, further delaying increases in advance of winter. The specter of additional hurricanes will lurk into October.

Against that potentially precarious backdrop, markets surged 17.1 cents on Thursday amid concerns about anemic production and supplies. The prompt month tacked on another 16.4 cents on Friday.

Should stockpiles of natural gas run low this winter, prices in the United States, as well as Asia and Europe, could soar, RBN Energy LLC analyst Lindsay Schneider said.

“European prices have hit new post-2008 or all-time highs more than 25 times since late June, and prices in Asia, which had been at seasonal all-time highs for most of the spring and summer, finally last week also topped [their] previous all-time record from last January,” Schneider said. “A confluence of bullish factors, including high global demand, low storage inventories, weather events, and supply outages, have all contributed to the surge in gas prices.”

Rain infiltrated the Northeast Friday and cool air swept through with highs of upper 50s to 70s. A “reinforcing cool shot” was expected in the region over the weekend, NatGasWeather said, minimizing demand.

Highs were also moderate through most of the Midwest, resulting in double-digit price declines across the region. Emerson dropped 44.5 cents to $3.970, while Joliet shed 16.0 cents to $4.455.

Summer-like highs continued to bake swaths of Texas, the Southwest and Southern California on Friday, though temperatures were expected to fall some over the weekend along with scattered showers, NatGasWeather said.

“National demand will remain light” in the week ahead, “as highs of 60s to 80s rule most of the U.S.,” the firm said. For the first week of October, most of the Lower 48 will experience above normal temperatures, “which for early fall means perfect highs of 70s to 80s across the northern U.S., besides the slightly cooler Northwest and Northeast corners.”

In California, where prices were volatile but lofty most of the summer, SoCal Citygate declined 16.0 cents on Friday to $6.045.

On the Atlantic storm front, meanwhile, Hurricane Sam developed over open waters on Friday after becoming the season’s 18th named storm, AccuWeather said. The firm’s forecasters cautioned that Sam could develop into a major hurricane prior to approaching the northern Caribbean early in the coming week.

Sam was located roughly 1,400 miles east-southeast of the Leeward Islands, packing winds of 75 mph, and it was expected to take a west to west-northwest path across the central Atlantic through the weekend, according to AccuWeather. While its ultimate destination was not clear, the East Coast of the United States and Canada could be impacted, the firm said.