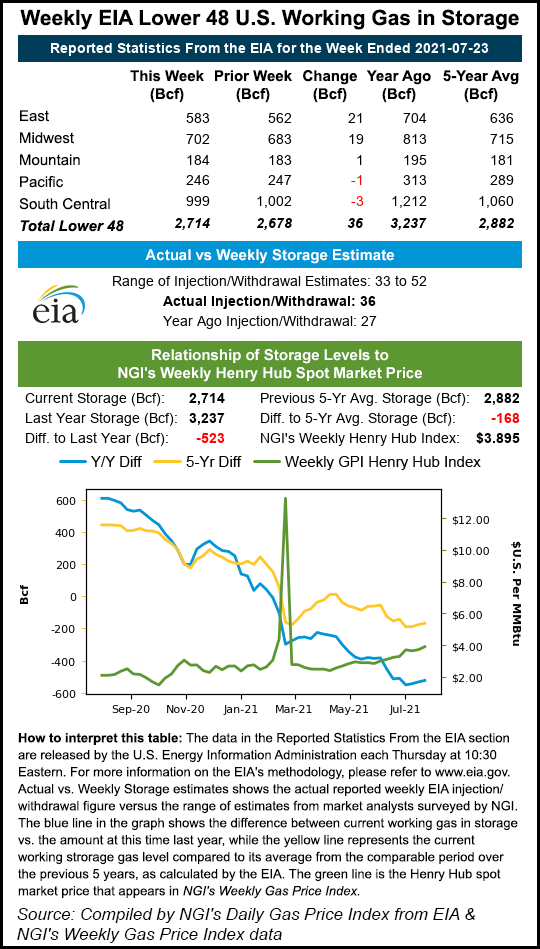 Gas traded Thursday closed out July and flowed for Friday and Saturday, the final two calendar days of the month. As such, the final four days of July trading — Monday through Thursday – were used to compile the Weekly GPI prices. Friday trading was separate, and was for Sunday and Monday delivery, the first two days of August flow.

Conditions during the week were underscored by persistently intense heat in the West, with Las Vegas, Phoenix and Palm Springs, CA, all routinely posting highs well into the 100s, according to National Weather Service data. Temperatures in the 90s and low 100s permeated much of the western half of the country, from the Northern Plains to Boise, Idaho.

On the futures front, the September Nymex contract, which took over as the prompt month on Thursday, jumped 9.2 cents that day and settled at $4.059/MMBtu. A day earlier, August rolled off the board with a final settlement of $4.044. Domestic cooling needs and strong demand for U.S. exports of liquefied natural gas (LNG) helped to propel futures.

Forecasters anticipated eased demand in the week ahead, thanks in part to bouts of rain and cooler air over the Great Lakes and Northeast. But outlooks called for sweltering heat to return before mid-August, driving national demand higher once again.

“This export phenomenon is here to stay,” he said. “It’s changed the market.”

Natural gas futures advanced Monday, fueled in part by the weather-driven demand but also LNG feed gas volumes that approached 11 Bcf – a level not far from records. Demand from both Asia and Europe, where gas stocks are light, is steady and shows no sign of slowing. Major countries on both continents are running low on stockpiles, driving needs for U.S. supplies of the super-chilled fuel.

The August Nymex contract on Tuesday finished lower for the first time in eight sessions, as traders took profits amid volatility near the prompt month’s expiration. However, futures rebounded on Wednesday as traders refocused on expectations for strong weather-driven demand later in August and continued export activity. August finished its run as the prompt month on a high note, eclipsing the $4.00 threshold and reaching highs last seen in 2018.

The September contract took over as the front month Thursday and extended the rally following a bullish government inventory report. The U.S. Energy Information Administration (EIA) reported an injection of 36 Bcf natural gas into storage for the week ended July 23.

The result came in below market expectations and amplified concerns about adequate supplies for the coming winter. That put upward pressure on prices. Prior to the report, major polls coalesced around a build of 42 Bcf. NGI modeled a 49 Bcf injection for the period.

Storage data continue to show “tight supply/demand balances, and that likely will remain the case until production can make a significant push higher,” Bespoke Services said.

The firm noted that production held close to 91 Bcf most days in July, below the 92 Bcf/d average in June and well below the roughly 93 Bcf/d level Bespoke said may be necessary to keep pace with strong power demand and exports.

“Either weather needs to step in, be it by way of cooler trends, or with higher wind on a sustained basis, or production simply must grow to new 2021 highs in order to alleviate” supply concerns, Bespoke said. “On that weather side, we do see higher wind forecast in the medium range, but also hotter temperatures, especially with respect to normal, as a more La Niña-ish pattern looks set to arrive, favoring heat…It remains difficult to argue against the overall bullish backdrop.”

The September Nymex contract faltered on Friday as traders focused on a cooler shift in weather for the week ahead. The front month dropped 14.5 cents day/day and settled at $3.914/MMBtu.

But analysts said momentum could soon return, with more heat on the horizon and export demand steady. “The fundamentals are really pretty bullish,” Marex North America LLC’s Steve Blair said. Blair, a senior account executive, told NGI that “the rest of the summer, for the most part, looks favorable.”

Mild temperatures and rain moved in over portions of the Plains and Midwest on Friday ahead of a broader cooldown.

A strong weather system with relatively cool air and a rash of thunderstorms was expected to push across the Great Lakes and into the East over the weekend and deliver comfortable highs of upper 60s to 80s to start the next trading week.

The volatile Northeast was an exception to the broader rule Friday, with prices climbing at a majority of hubs in the region after losing ground a day earlier. Algonquin Citygate near Boston, for example, gained 18.0 cents to $3.000, and recovered most of the 22.0 cents it shed the prior day.

Senior meteorologist Mickey Shuman of IBM’s The Weather Company said while July ended on a hot note, with cumulative cooling degree days higher than normal, the expected cooler air will likely drive gas demand lower than average for the first week of August. However, temperatures are expected to trend back to seasonal norms before mid-August, likely reigniting solid summer demand.

The West, Texas and much of the Plains are expected to be hot and humid with highs ranging from the upper 80s to 100s in the second week of August. Highs were projected to climb back into the 80s and 90s in the East.