Weekly cash market prices ratcheted up across much of the Lower 48, led higher by strong cooling demand in California and swaths of the East. 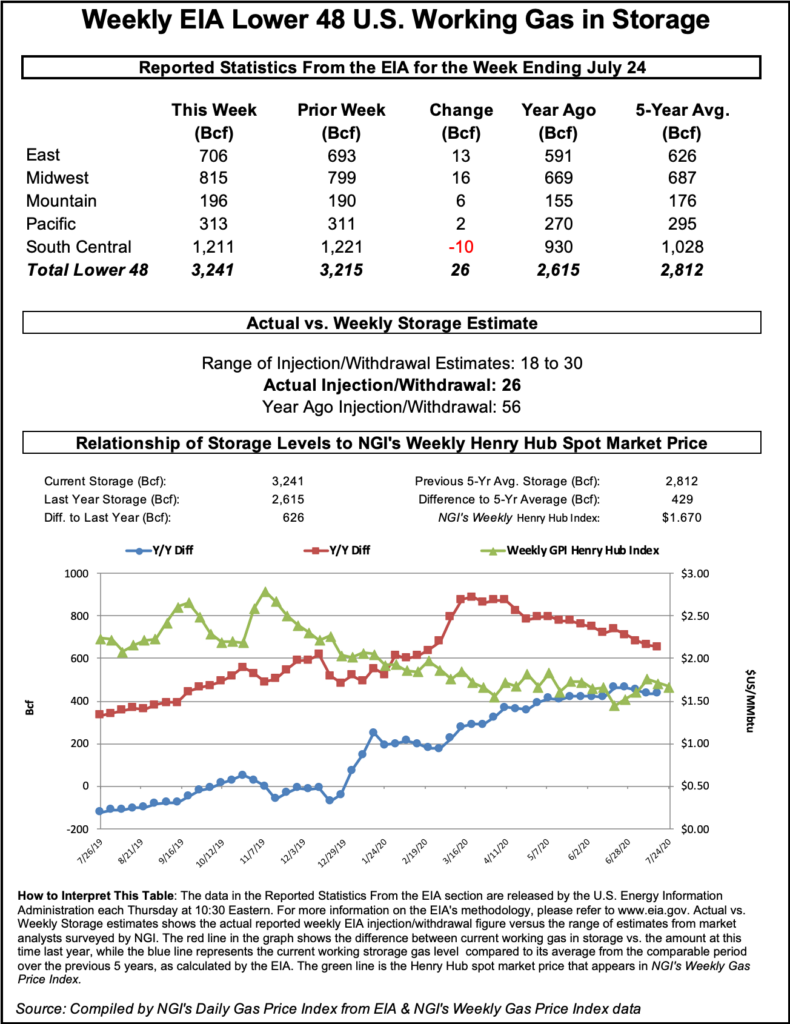 Prices in the eastern stretches of the Lower 48 reflected “stronger-than-expected power burns” over several days “due to highs of mid-90s over the East Coast,” NatGasWeather said.

In California, SoCalGas started restricting withdrawals out of the Honor Rancho storage field by 45 MMcf/d on Tuesday, according to Genscape, with the interruption to last through Sept. 19. The Aliso Canyon storage field is already restricted in California’s peak cooling season.

Nationally, production levels held steady during the week, while demand outside of that driven by weather remained elusive. Most notably, liquified natural gas (LNG) flows continued to be subdued relative to pre-coronavirus pandemic levels, reflecting lighter demand for U.S. natural gas exports as the virus continues to spread and the U.S. and global economies remain on shaky ground.

Andrew Hunter, a senior economist at Capital Economics, said federal data show that in the United States alone there were still 15 million fewer people in the workforce in July than in February, prior to the pandemic. “That would underline that there is a long way to go in the economic recovery,” he said.

Natural gas futures were under pressure Monday following forecasts for cooler temperatures, but they rallied Tuesday and Wednesday on news of upward trends in Mexican exports and predictions for a light storage build.

The August Nymex contract settled at $1.854/MMBtu, up 5.4 cents day/day on Wednesday, its final trading day before rolling off the board.

“The overall surge in U.S. exports to Mexico indicates that the latter’s demand for gas continues to recover from the disruptions caused in April and May” by the pandemic, Genscape analyst Ricardo Falcon said. “This rekindling coincides with the seasonal drive that typically leads to Mexican gas consumption peaks between June and August every year, especially from power burns.”

The demand from Mexico is important because LNG volumes are hanging near 3.0 Bcf, far from pre-pandemic levels, cooling demand is bound to taper off as summer heat fades, and industrial energy demand could weaken again amid further spread of the virus.

“North American natural gas markets have been upended this year by a multitude of events, chief among them the plunge in crude oil prices and a dramatic drop in LNG exports,” RBN Energy LLC analyst Jason Ferguson said. However, “things are looking up” in Mexico. “Perhaps things are getting back to normal, at least in this small corner of the energy markets.”

The U.S. Energy Information Administration (EIA) reported an injection of 26 Bcf into storage for the week ending July 24. Ahead of the report, a Bloomberg survey showed a median prediction of 23 Bcf, while a Wall Street Journal poll landed at 25 Bcf. NGI predicted a build of 24 Bcf.

The injection, coupled with increased expectations for easing heat intensity that could affect cooling demand well into August, amplified concerns about excess supply and the potential for containment issues in the fall.

Continued spread of the coronavirus along with grim economic news added extra doses of worry.

The Commerce Department said Thursday that the U.S. economy contracted at a record rate last quarter, with GDP falling at a 32.9% annual rate. New outbreaks of the virus in heavily populated states such as California and Florida threaten to mute growth in the current quarter, Federal Reserve officials said after policy meetings during the week.

“The ongoing public health crisis will weigh heavily on economic activity, employment, and inflation in the near term, and poses considerable risks to the economic outlook over the medium term,” the Fed’s panel of policymakers said in a statement late Wednesday after two days of meetings.

The September Nymex contract took over as the prompt month on Thursday and dropped 10.1 cents day/day to settle at $1.829/MMBtu. It fell further Friday.

Spot prices fell across much of the Lower 48 on Thursday – the final day of the covered week — amid the forecasts for cooler temperatures.

Energy Transfer LP said late Wednesday a fire erupted at the massive Mont Belvieu natural gas liquids (NGL) complex east of Houston, damaging the company’s Lone Star NGL facility after a contractor struck an underground pipeline. The company said the fire was contained and there were no injuries. However, the blast pushed back on Permian supplies.

In the Northeast, Algonquin Citygate was down 21.0 cents to $1.525, and Tenn Zone 6 200L dropped 45.5 cents to $1.705. Prices were volatile in the region with lofty temperatures early in the week but an expected cooling shift on the way.

At the same time, hurricane season in the Atlantic is underway.

Traders were tracking Hurricane Isaias — the ninth named storm of 2020 — which was projected to approach Florida by the weekend, according to the National Hurricane Center.

The storm “is expected to bring cooler temperatures to the Southeast region over the coming week,” Genscape Inc. said, pushing CDDs over the 14-day outlook well below normal.

“We do still envision above normal heat toward the middle of August, but nothing extreme, as the focus of above normal temperatures looks to be more north versus south,” Bespoke Weather Services said.Cash prices dropped further on Friday, led down by continued declines in West Texas, to close out the trading week.