Weekly cash prices gained ground amid scorching temperatures and strong cooling demand across much of the western Lower 48, highlighted by whopping surges in California. 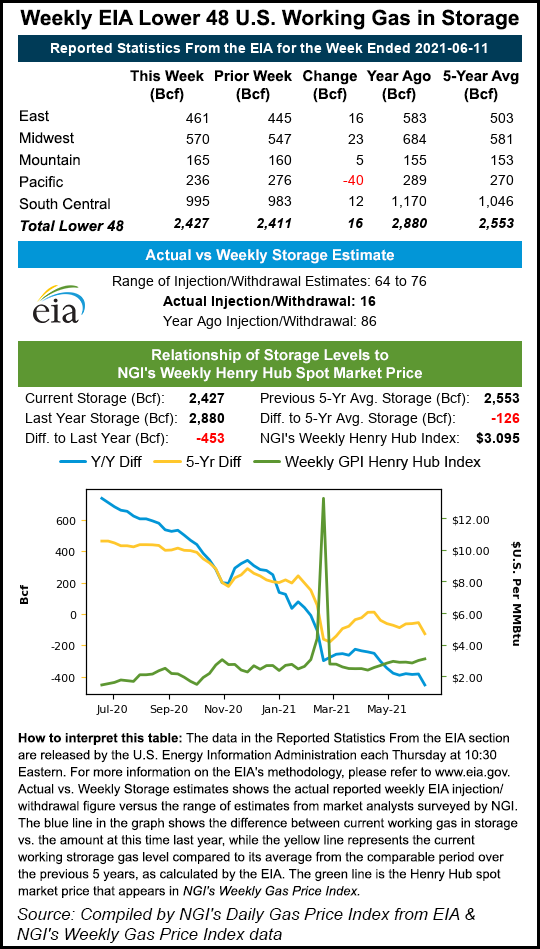 Blistering heat moved in early across the Plains, Mountain West, Southwest and California and hung around most of the week, driving up demand and prices. High temperatures ranged from the high 90s in the Dakotas to 120 in the deserts of the Southwest, baking Las Vegas, Phoenix and other major markets.

It was hot over most of the South and Texas, as well, throughout the week. Citing sustained highs in the 90s and forced power outages, the Electric Reliability Council of Texas asked Texans during the week to conserve as much energy as possible to avoid blackouts.

The July Nymex futures contract, meanwhile, finished a bumpy trading week on a sour note. The prompt month settled at $3.215/MMBtu to close the trading week Friday, down 3.8 cents day/day.

Futures stumbled as weather forecasts for the week ahead shifted cooler and a storm in the Gulf of Mexico (GOM) threatened to curb demand. A record reclassification that altered the latest government inventory report also weighed on markets.

The U.S. Energy Information Administration announced an implied build of 67 Bcf for the week ended June 11, but the PG&E accounting adjustment reduced totals in the Pacific region, and the official injection into storage fell to 16 Bcf.

It marked the largest reclassification on record in a single region. It left traders scratching their heads and pushed some market participants temporarily to the sidelines, Marex North America LLC’s Steve Blair, a senior account executive, told NGI.

“I think it took the market by surprise for sure,” he said.

After gains earlier in the week – fueled in part by summer demand expectations and strong cash prices – futures finished flat Thursday before falling on Friday.

The American and European weather models showed a pattern for Tuesday through Friday of the coming week “not quite hot enough,” one that could result in “only moderate national demand,” according to NatGasWeather.

The European model lost a few cooling degree days (CDD) for the June 27-July 1 time frame overnight, as well. Forecasts pointed to “very warm to hot conditions over much of the western, southern and eastern U.S. with highs of mid-80s to mid-90s, 100s over the Southwest. But with the European model losing a few CDD “for this important period, the natural gas markets likely noticed,” the firm said.

Additionally, the National Hurricane Center said Friday a potential tropical cyclone in the GOM was expected to approach the north-central Gulf Coast by early Saturday, bringing cloud cover and cool rains that could dampen demand for natural gas.

Meanwhile, the latest injection into gas stockpiles, while skewed by the reclassification, lifted inventories to 2,427 Bcf. That compared with the year-earlier level of 2,880 Bcf and the five-year average of 2,553 Bcf.

Every region posted an increase, except the Pacific, where stocks dropped by 40 Bcf because of the PG&E adjustment. The change equaled the implied flow of 11 Bcf minus the 51 Bcf adjustment.

Looking ahead to next week, early estimates call for a modest build that reflects the intense heat that cooked much of the United States through mid-June.

Bespoke Weather Services estimated a 72 Bcf injection for the week ended June 18, well below the five-year average of 83 Bcf. The firm noted that, while temperatures are likely to ease in coming days, June overall should prove a particularly strong month for natural gas demand and prices.

“We remain on pace for a high-end hot June overall, ranking in the top five hottest in the historical record,” the firm said.

Next-day cash prices lost momentum on Friday ahead of the weekend and the expectations for less heat in the week ahead. NGI’s Spot Gas National Avg. shed 5.5 cents to $3.080.

NatGasWeather noted that “very hot conditions” persisted on Friday over most of the western United States and Texas, with highs of 90s in the Lone Star State to 120 in the Southwest deserts for regionally strong demand.

However, demand was light across the Great Lakes and Mid-Atlantic regions as weather systems delivered “comfortable highs” of 60s to 80s, the firm said.

National demand will ease in the final full week of June, the forecaster added, “as weather systems track across the northern and east-central U.S.” However, substantial heat is still expected over the Southwest, while a drought in California could continue to minimize hydropower and put upward pressure on gas demand.

After avoiding blackouts Thursday, California grid officials warned again Friday that power supplies could be under pressure with triple-digit temperatures in the state’s deserts. The California Independent System Operator asked residents on Friday to voluntarily minimize power usage to ward off outages heading into the weekend.

“If demand exceeds supply, at the direction of the state’s grid operator, PG&E and other energy companies in the state could be asked to turn off power in order to help prevent larger outages to the grid,” PG&E officials said. The company, however, noted that conservation efforts by Californians appeared to lower demand late in the week.

Against that backdrop, hubs in the West on Friday gave up some of the strong gains they piled up earlier in the week.

Prices were up across the Northeast, a bright spot. Algonquin Citygate climbed 40.5 cents to $2.895.

While weather-driven demand routinely ebbs and flows, StoneX Financial Inc.’s Thomas Saal, senior vice president of energy, said forecasts for more heat and expectations for strong exports over the balance of this summer keep him bullish on natural gas prices. Production, while improving from pandemic lows, is not yet keeping pace with accelerations in demand.

The summer conditions in particular should support cash price strength, he said. “The heat is still going to be all over the place,” Saal told NGI. “Balances are looking tight.”