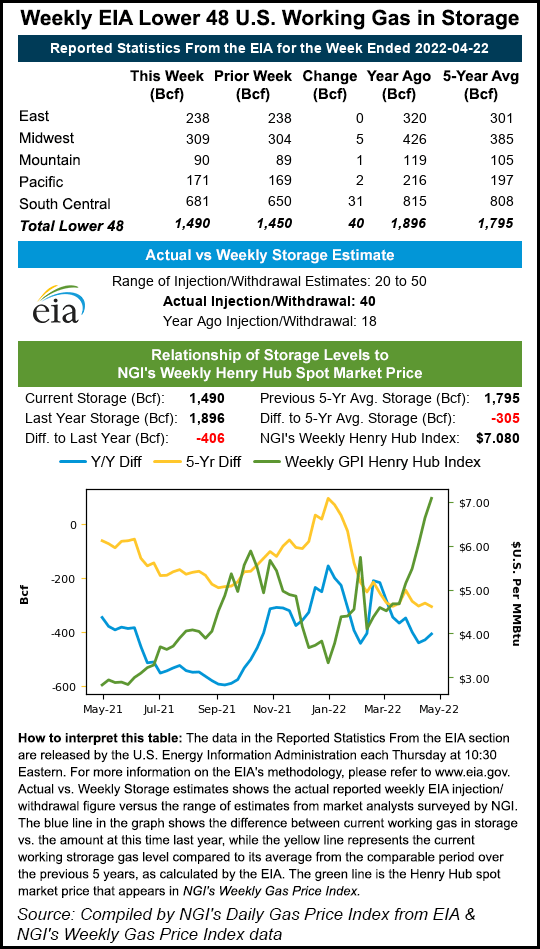 Nymex futures, meanwhile, moved sharply higher as blizzard conditions that slammed the Rockies knocked off production at a time when the gas market was looking for more supply.

Pipeline maintenance also curbed output, sending the May contract rolling off the board at $7.267. June futures, meanwhile, hit an intraweek high of $7.422 before closing out Friday’s session at $7.244.

Despite the calendar nearing May, harsh wintry weather shocked traders returning to their desks after the weekend. Pipelines in the region had warned of potential impacts ahead of the cold front, but actual disruptions began Sunday.

The pipeline reported that it has been experiencing problems with its third-party power provider since the blizzard, and the Williston station remains offline until further notice. WBI does not have an estimated time of restoration.

“The force majeure will reduce the maximum outlet capacity on Line Section 30 (West) to around 60,000 MMBtu/d until repairs are completed,” Wood Mackenzie analyst Kara Ozgen said. “Additionally, operations at the Tioga Processing Plant in Williams, ND, have not yet returned.”

Wood Mackenzie said Rockies volumes had declined by around roughly 235 MMcf/d by Tuesday.

Production started returning during the week. Bloomberg on Friday reported that 80% of the natural gas and oil volumes lost in North Dakota because of the blizzard were expected to be restored over the weekend. The remaining volume may take at least a week to return because of damage to electrical infrastructure and challenges accessing more remote locations.

On the pricing front, Northwest Pipeline Wyoming Pool spot gas dropped 14.5 cents on the week to average $6.620, while Ventura picked up 5.0 cents to average $6.750.

Production also dropped in other areas of the country, with pipeline maintenance underway that was curbing gas flows. Texas production had dropped about 280 MMcfd by Tuesday, while Midcontinent output fell around 175 MMcf/d.

Northeast prices were stronger, however, amid lingering cold in that part of the country. Huge swings were seen throughout the period, with PNGTS cash averaging 79.0 cents higher on the week at $8.150.

Futures action, meanwhile, remained volatile against the backdrop of Russia’s escalating war on Ukraine. The Kremlin this week stopped gas flows into Poland and Bulgaria for failing to comply with Russia’s demand for a new payment method. Although the halt in gas deliveries to the two countries were not expected to heavily impact balances, the move amplified concerns of more stoppages ahead.

As Europe moves aggressively to wean itself off Russian supplies, the call on U.S. exports of liquefied natural gas is expected to remain strong for years to come. Commercial discussions for LNG export projects not yet sanctioned have been robust in the wake of the conflict. In the meantime, the Department of Energy this week approved an additional 500 MMcf/d of LNG exports from two Gulf Coast projects.

Golden Pass, set to begin exports in 2024, received approval to boost capacity to 18.1 million metric tons/year (mmty) from 15.6 mmty. The Golden Pass project, a venture by ExxonMobil and Qatar Energy currently under construction southeast of Houston, could be the largest addition to U.S. capacity in the near term.

Exports from the proposed Magnolia LNG project were increased to 8.8 mmty from 8 mmty. Magnolia, still unsanctioned, is designed as a four-train facility that would be constructed in Lake Charles, LA, by Glenfarne Group LLC.

With LNG feed gas demand expected to run near maximum capacity this summer, the market has been on edge as domestic inventories are on pace to fall short of adequate levels by the winter.

The Energy Information Administration (EIA) on Thursday reported a 40 Bcf injection into inventories for the week ending April 22. The double-digit increase was in line with expectations, but expanded the deficit to the five-year average to 305 Bcf.

Broken down by region, the South Central continued to lead injections, adding a net 31 Bcf to stocks, according to EIA. This included an 18 Bcf build in nonsalt facilities and 14 Bcf in salts. Midwest inventories rose by 5 Bcf, while Pacific stocks edged up 2 Bcf. The Mountain region only added 1 Bcf, while the East stayed flat week/week.

In analyzing the latest inventory report, the Schork Group noted that after a slow start to the traditional injection season, the EIA has now reported back-to-back solid builds. Over the past three weeks, a total of 108 Bcf has been added to stocks, which is 15% above the seasonally adjusted trend, it said.

“However, because of the slow start, stocks are 22% below the corresponding week from a year ago and approximately 17% below the five-year average,” Schork analysts added.

Looking further ahead into summer, Mobius Risk Group said the cumulative storage build last June was a sizable 350 Bcf. In fact, there were two reporting periods with builds above the century mark.

“June 2022, and price action at the front of the curve, will likely be measured in reference to last year’s 350 build,” Mobius analyst Zane Curry said. Price action also may be dictated by whether there are consecutive injections of more than 100 Bcf at any point before cooling demand begins in earnest late in the month.

“The $7.00 mark and the $5.00 mark for Balance of 2022 and Calendar Year 23 will likely be key levels to watch over the next couple of weeks as seasonal demand begins to fade,” Curry said.

Spot gas – which traded Friday for gas delivery Sunday and Monday – advanced in the Midwest and parts of the East on Friday. That came alongside what NatGasWeather described as a chilly late-season weather system that delivered showers and thunderstorms to markets throughout the North.

The conditions, including overnight lows from the 20s to 40s, were expected to persist through the weekend, galvanizing relatively strong heating demand for late April/early May.

“Reinforcing cool shots will sweep across the Midwest and East” in the trading week ahead, with lows in the 30s in some areas, NatGasWeather said.

The firm added that heat is expected to become more widespread in the Southwest, generating pockets of solid cooling demand. However, on Friday, conditions in the southern reaches of the country were mostly comfortable, offsetting demand in northern markets.

In most southern markets, however, prices were flat or modestly lower. The biggest declines were in Texas, where El Paso Permian shed 17.5 cents to $6.150 and Katy dropped 13.5 cents to $6.520.

NatGasWeater said forecasts for the first half of May showed enough heating demand in the far North and enough cooling demand in the South to likely prevent large storage injections. This, the firm added, would keep storage deficits of high interest and “keep the background state relatively bullish” ahead of a summer expected to usher in “intimidating” heat.

Most major cities in the Northeast and Midwest, from Boston to Chicago, experienced more 90-degree days than normal last summer, AccuWeather said in a report Friday. The firm’s forecasters expect a repeat in the coming summer, presenting the potential for elevated cooling demand in these key natural gas consuming regions.

AccuWeather also forecast above-average levels of rain in the Midwest and Northeast. Heavy moisture increases the odds of harsh storms from the Atlantic coast through the Great Lakes, the firm added. “We may have a lot of severe weather to deal with,” AccuWeather meteorologist Paul Pastelok said.