Of all the points followed by NGI, only six traded in positive territory for the week ended July 28. The market failed to build on the 14-cent rally from the week before, and the NGI Weekly National Spot Gas Average dropped 22 cents to $2.66. 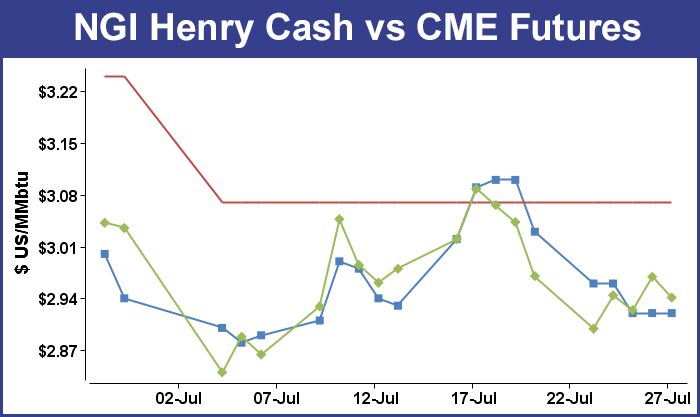 Two of the six points making a gain were in Canada. The week’s greatest gainer was Empress, adding 17 cents to $C2.68/Gj, and the biggest loser on the week was Algonquin Citygate, dropping $1.18 to $2.05.

Regionally, the East and West Coasts captured the week’s extremes, with California and the Rockies easing just 3 cents to $2.97 and $2.63, respectively, and the Northeast plunging 91 cents to $2.20.

August futures went off the board Thursday at $2.969, down 9.8 cents from the expiration of the July contract.

September futures retreated 2 cents for the week to $2.941.

Thursday’s activity saw the Energy Information Administration (EIA) disclose a storage build far below expectations at just 17 Bcf, about 7 Bcf less than what traders were looking for. August futures got a quick shot of adrenaline following the EIA report. When the number rattled across trading desks, the expiring August futures rose to $2.998, but at 10:45 a.m. August was trading at $2.970, up 4.6 cents from Wednesday’s settlement. The soon-to-be-spot September contract had risen 6.3 cents from Wednesday to $2.977.

Before the report was released, traders were looking for a storage build far higher than the actual figures. Last year 20 Bcf was injected and the five-year average stands at 47 Bcf.

Tim Evans of Citi Futures Perspective said, “This was a second consecutive bullish miss relative to consensus expectations and supportive relative to the 47-Bcf five-year average for the week ended July 21. While the report doesn’t provide background fundamental data on supply or demand factors, our guess is that this represents a higher rate of power sector consumption than anticipated.”

In Friday trading physical natural gas for weekend and Monday delivery slipped a couple of cents as forecasters called for moderating conditions in the Northeast and traders saw little need to commit to three-day deals.

Gains in portions of Texas along with flat pricing in the Midwest and Midcontinent were not enough to stave off declines in the Northeast and Appalachia. The NGI National Spot Gas Average retreated two cents to $2.62.

Futures trading was lackadaisical with the now-spot September contract held to less than a five-cent range. At the close September had fallen 2.6 cents to $2.941 and October was off 2.2 cents to $2.981. September crude oil rose 67 cents to $49.71/bbl.

It was hard to get motivated to make weekend physical purchases as energy usage was forecast at lower levels Monday than Friday. The New York ISO predicted Friday’s peak power usage of 23,265 MW would fall to 18,680 MW Saturday, but only reach 22,622 MW Monday. The PJM Interconnection calculated Friday’s peak load of 43,363 MW would drop to 31,133 MW Saturday and peak at 40,053 MW Monday.

Declines further west were less extreme. Gas at the Chicago Citygate was flat at $2.79, as was the Henry Hub at $2.92. Deliveries to El Paso Permian dropped a nickel to $2.60 and gas at Northern Natural Demarcation shed a penny to $2.72.

AccuWeather.com meteorologists forecast that “dry and pleasant conditions will sweep unusually far southward across the eastern third of the United States to end the month of July. This may be the first opportunity in a couple of months for residents of the South to give air conditioners a break and crack open the windows. Outdoor activities will become more bearable even during the hottest part of the day.

“This will be a significant pattern change for places that haven’t had much relief from the heat and humidity,” AccuWeather.com meteorologist Paul Pastelok said.

“St. Louis will experience the most comfortable weather since late June with highs in the middle 80s and low humidity in store this weekend. In July, 23 of the first 26 days were in the 90s and 100s in the city. The long stretch of 90-degree Fahrenheit heat and sweltering humidity in Nashville, TN, Atlanta and Birmingham, AL, will be replaced with highs in the 80s and low humidity early next week.”

September natural gas opened a penny higher Friday morning at $2.98 as traders kept to their bullish stance and weather was seen having less of an impact. Overnight oil markets rose.

Traders are sensing a positive tonality to the market and are staying long. “[W]e are viewing the storage factor as sufficiently bullish to support additional price gains in September futures of around 14 cents from yesterday’s settlement,” said Jim Ritterbusch of Ritterbusch and Associates in a morning note to clients. In his view “the supply surplus narrowed much more than we had expected [Thursday] to the 111 Bcf level and appears poised for additional significant contraction going forward through the next couple of EIA releases. As a result, a shift in temperature trends across a significant portion of the U.S. next month toward a sustained hot spell could easily force an erasure of the long standing supply overhang in keeping the market highly sensitized to any tropical storm activity, nuke outages or pipeline disruptions as this summer proceeds.

“While the rollover to the September contract as prompt month will reduce the influence of the daily updates to the temperature forecasts, we feel that an unusually cool August will be needed to preclude additional price strength from here. In other words, it will be difficult to keep nearby futures south of the $3 mark and we still see high probability of a test of four week highs as early as next week.

“Near term bullish stance still advised with long September positions representing a hold with stops raised to the $2.87 level with $3.11 still targeted,” he said.

Overnight weather models turned slightly warmer. “[Friday’s] 11-15 day period forecast is a shade warmer East and West when compared to yesterday’s forecast,” said WSI Corp. in a morning forecast. “Net changes result in a +0.6” continental United States population-weighted cooling degree days “addition to 57.7 for the period. [However], forecast confidence is considered well below average standards due to abnormally high uncertainty in the models.”

Gas buyers faced with the task of making purchases for power generation across the broad PJM footprint don’t look to have much in the way of renewable energy to offset purchases. “A strong coastal low is forecast to spin up on Saturday, keeping much of the eastern regions wet and cloudy through the weekend,” said WSI. It forecast that high pressure will settle in its wake, producing fair weather over the weekend with total precipitation of 1 to 2 inches.

“Wind gen looks to move into a slightly more favorable state [Saturday] with output peaking near 3 GW. Wind gen looks to fall off over the weekend into early next week, with sub 1 GW production.”