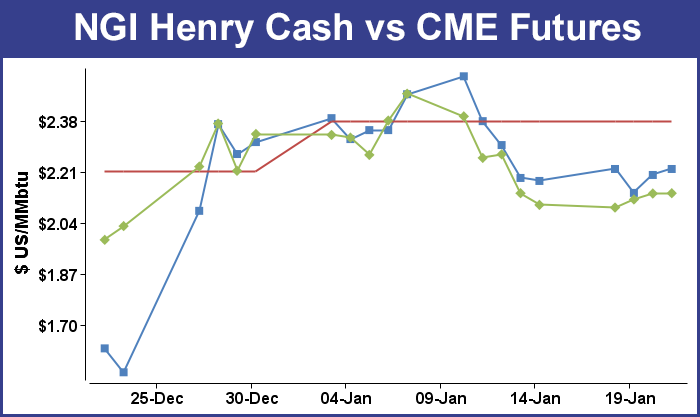 Of actively traded market points, the location making the greatest strides proved to be Tennessee Zone 6 200 L with a gain of 47 cents to $4.99 and gas headed to New York City on Transco Zone 6 proved to be the week’s greatest loser, retreating 86 cents to $3.73. Most points outside the Northeast lost about a dime.

Regionally, the Rocky Mountains shed the most, giving up 19 cents to $2.05, and South Louisiana was the most resilient, dropping 12 cents to $2.15.

February futures closed out the week with a gain of 3.9 cents to $2.139, and a contributing factor in the rise was the Energy Information Administration (EIA) report of a storage withdrawal of 178 Bcf, less than what the market was expecting. Initially prices dropped to the lows of the day once the number was released but prices managed to rebound off the lows as crude oil began a $1 plus rally at midsession. At the close, February was 2.0 cents higher at $2.138 and March had gained 1.6 cents to $2.139.

The release of storage data by EIA showed the strongest demand so far this season. Last year 220 Bcf was withdrawn, and the five-year average was for a 177 Bcf decline. Problem is, little impact was seen in the five-year storage surplus.

IAF Advisors calculated a 191 Bcf pull, and ICAP Energy was expecting a withdrawal of 182 Bcf. A Reuters survey of 21 traders and analysts revealed a sample mean of -184 Bcf with a range of -172 to -191 Bcf.

EIA released its storage number at 10:30 a.m., and by 10:45 a.m. February was trading at $2.085, the low for the day and down 3.3 cents from Wednesday’s settlement. Traders see important $2 support in sight, but “we are far enough from the $2 level at this time and I don’t think we are in danger of seeing that,” a New York floor trader told NGI.

The remainder of the petroleum complex, however, is highly bearish. “We’ve got 7 months of the heating oil under $1. It’s all very negative,” he said.

Longer term analysts see expected seasonal warming taking hold of the market. “[T]he 178-Bcf net withdrawal was a match with the five-year average, and therefor neutral on a seasonally adjusted basis,” said Tim Evans of Citi Futures Perspective. “But it was less than expected given the weather and so also suggests some weakening of the background supply/demand balance. We see some small chance for prices to rally on this week’s cold and the larger net withdrawal it implies for the next round of numbers, but expect the market to remain more focused on the seasonal warming trend going into February.”

Using the 5-region format inventories now stand at 3,297 Bcf and are 629 Bcf greater than last year and 473 Bcf more than the five-year average. In the East Region 44 Bcf were pulled, and the Midwest Region saw inventories fall by 63 Bcf. Stocks in the Mountain Region were down by 7 Bcf and the Pacific region was lower by 14 Bcf. The South Central Region, closely similar to the former Producing Region, shed 50 Bcf.

In Friday’s trading gas for weekend and Monday delivery was little changed in spite of a dangerous blizzard bearing down on large eastern population centers.

Very modest overall gains at eastern points were unable to offset much wider declines in the Midwest, Midcontinent and Gulf Coast. The NGI National Spot Gas Average fell 4 cents to $2.24, and average gains in the East were seen at 3 cents. Most points traded a few pennies to just over a nickel lower.

Futures trading was equally lackluster, with the spot February contract tracing out a modest 5-cent trading range. At the close, February had gained all of one-tenth of a cent to $2.139 and March was up two-tenths of a cent to $2.141. March crude oil continued its rebound adding $2.66 to $32.19/bbl.

Market points in the path of the weekend storm managed to add to gains made in Thursday’s trading, but temperatures across the East and Midwest by the end of weather hostilities on Monday were expected to be at or above seasonal norms. AccuWeather.com forecast that the Friday high in New York City of 31 degrees would dip to 29 Saturday before rising to 37 on Monday, one degree below the seasonal norm. Cleveland, OH’s 27 maximum on Friday was expected to inch up to 28 Saturday before surging to 40 on Monday, five degrees above normal. Chicago’s Friday high of 31 was predicted to rise to 32 Saturday and reach 37 on Monday, 6 degrees above normal.

Points outside the crosshairs of the blizzard-like conditions eased on light volume. Deliveries to the Algonquin Citygate shed 12 cents to $4.74, and gas on Tennessee Zone 6 200 L dropped by 57 cents to $4.41.

Natural gas demand may slacken somewhat early in the week as the winter storm passes through, but one section of the country is anticipated to see continued demand growth in spite of the warm December. “Cold weather brought responsive demand to SEMA [Southeast Mid-Atlantic] this week, charting the second and third highest demand levels of the winter,” said industry consultant Genscape in a Friday report.

“Jan. 18 and 19 saw demand break 20 Bcf/d coming in at 20.29 and 20.15 Bcf/d, respectively. Both fell just short of the high water mark of 20.45 Bcf/d set on Nov. 18. While SEMA has yet to see any massive demand blowouts like the previous few years, this cold snap gives further proof that SEMA demand still has teeth, in spite of the mildest December on record, winter 2015/16 to date has seen 8.95% higher demand than the three average and 8.1% higher demand than last winter.

“Thus far, demand per degree levels are holding strong against levels seen last winter but are not displaying the same growth trend seen in summer 2015. Looking forward, temperatures are currently forecast to stay colder than average at 26.5 and 28.8 HDDs for Saturday and Sunday meaning demand should remain above average in spite of the weekend.”

Analysts see the market on the downward side of the usage cycle and expect lower prices. “We are maintaining a bearish stance and would suggest holding any short March positions established [Thursday] within the $2.15-2.19 zone in anticipation of an eventual price decline to below the $2 mark,” said Jim Ritterbusch of Ritterbusch and Associates in a Friday morning note to clients. “We are emphasizing the advanced stage of the heavy usage cycle in which the weather factor will gradually diminish. And with updated one- to two-week temperature views generally favoring a renewed mild trend across most of the continental U.S., some additional weakening would appear to lie ahead.

“We viewed yesterday’s smaller than expected storage withdrawal as reinforcement to a bearish case. But apparently, the market was able to absorb this release with assistance from bullish spillover from the oil complex and some apparent short covering related to the upcoming blizzard that will soon be arriving into the eastern region. But any cold weather that might associate with a major snowstorm is likely to be short lived and followed by a significant northeast warm-up, especially within the eight-14 day time window that now stretches out to about Feb. 4th. All factors considered, lower values would appear to lie ahead, and we suggest maintaining any existing short March positions with stop protection advised above the $2.21 level close only.”

The dangerous blizzard expected to pound the Mid-Atlantic Friday through Saturday will likely generate enough wind generation across the PJM footprint to offset purchases of natural gas for power generation. WSI Corp. in its Friday morning report said, “The storm will hold temperatures in the mid 20s and 30s, [and] fair and moderating conditions are expected to develop behind this system during Sunday into early Monday with highs in the mid 30s to mid 40s.

“However, a frontal system will slide across the power pool with rain and snow showers late Monday through Tuesday. It will be breezy and warmer ahead of this system with highs in the 30s and 40s. The major winter storm will help boost wind gen later [Friday] into midday Saturday, though mainly over the Mid Atlantic. Total output may peak at 3-4 GW. The second storm system will cause wind gen to ramp up during Sunday into early next week.”