There were high-fives all around for natural gas traders for the week ended June 17. Not one of the points followed by NGI fell into the red, and most locations notched gains around 20 cents. 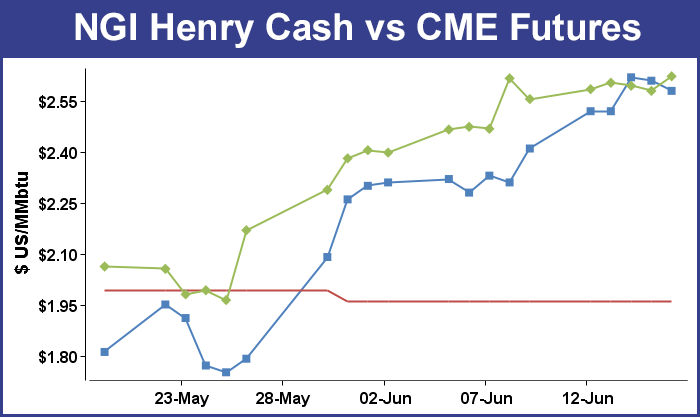 The NGI Weekly Spot Gas Average rose 21 cents to $2.32, and the market point leading the charge higher was Iroquois Zone 2 with a rise of 48 cents on the week to $2.50. At the low end of the ladder was gas delivered to Transco-Leidy with a modest rise of 6 cents to $1.53.

The primary market driver Thursday was the release of EIA storage data and the numbers came in slightly higher than expected. 69 Bcf was injected for the week ending June 10, about 5 Bcf greater than expected and prices fell, rose to a new high, but slipped into negative territory at the close. When the dust had settled July had given up 1.5 cents to $2.580 and August was off 2.5 cents to $2.627.

Traders were circumspect about the market’s close. “I thought we would settle above $2.60, but it didn’t happen. A close above $2.60 would have been an indication of higher prices,” said a New York floor trader. “We are in limboland, but the market did make a new high at $2.639.”

Going in to the report market bulls were reminiscing about the prior week’s lean build when EIA reported a 65 Bcf injection and caught traders and analysts by surprise. Prices ended up the day about 15 cents higher as industry estimates were coming in around the mid to high 70 Bcf mark. Indications were that there were no errors or adjustments to the numbers. “65 Bcf? What was that all about?” said John Sodergreen, publisher of Energy Metro Desk (EMD).

“Very good question. EIA asserts that there was no funny stuff or mistakes in the process last week, and the number stands at 65 Bcf, like it or lump it. A 10 Bcf miss? Sure enough. The bulls seemed to like the surprise report, but the rest of us were left scratching our heads.”

Nonetheless, the pattern of below-average storage builds continued. The EMD survey this week came in at a 67 Bcf build, about in line with the industry average. Last year, however, 96 Bcf was withdrawn and the five-year pace stands at a hefty 87 Bcf.

First Enercast Financial calculated a 61 Bcf injection, and the folks at ICAP Energy were looking for a 69 Bcf increase. A Reuters survey of 23 traders and analysts showed an average 64 Bcf with a range of 57 to 70 Bcf.

“I was looking for a 64 to 65 Bcf number. This was a little bit more than expected, but nothing really out of the norm,” said a New York floor trader. “I don’t really know if this had all that much of an impact. All the other markets are down sharply.

Bespoke Weather Services of Harrison, NY, said, “EIA data this week showed a slightly larger injection than last week with slightly fewer total degree days on the week. The result is that we did not see much week-over-week tightening, and instead see this number as indicative of a new supply-demand balance becoming established in the natural gas market. Record high storage levels for this time of year will still cap short-term upside from here.”

“The data for last week followed two bullish side misses versus expectations, suggesting that the trend toward a tighter background supply/demand balance may have come to an end, although we continue to see enough air-conditioning demand to limit injections to something less than the five-year average rate through the balance of the month,” he said.

Inventories now stand at 3,041 Bcf and are 633 Bcf greater than last year and 704 Bcf more than the five-year average. In the East Region 26 Bcf was injected, and the Midwest Region saw inventories increase by 24 Bcf. Stocks in the Mountain Region rose 5 Bcf, and the Pacific Region was higher by 5 Bcf. The South Central Region added 9 Bcf.

In Friday’s trading weekend and Monday gas surged as expected weather-driven demand prompted traders to score some three-day deals rather than take chances on spot availability over what looked to be a scorcher of a weekend in many parts of the country.

The NGI National Spot Gas Average rose a solid 6 cents to $2.39 and was led by average gains in California of about 30 cents and an average advance at Rockies points of close to 20 cents. Futures prices rose, enabled by firm cash quotes and an overall healthy petroleum sector. The July settlement was the highest in more than nine months. At the close July had risen 4.3 cents to $2.623, and August was higher by 3.9 cents to $2.666. July crude oil vaulted $1.77 to $47.98/bbl.

California and Rockies locations led the charge higher, fueled by forecasts of triple-digit temperatures. AccuWeather.com forecast that Friday’s high in Los Angeles of 84 degrees would hold Saturday, but by Monday the high was expected to reach 103, 24 degrees above normal. Sacramento’s Friday high of 80 was seen rising to 83 Saturday and 97 by Monday, 9 degrees above its seasonal norm. In Denver the Friday high of 87 was forecast to jump to 94 Saturday before settling down to 86 Monday, the seasonal norm.

The exceptional temperatures were expected to prompt large variances in cooling loads. Industry consultant Genscape said its metrics were “forecasting Lower 48 population-weighted CDDs [cooling degree days] will reach as high as 141 CDDs by Monday, which is about 47 CDDs above normal for this time of year. CDDs are forecast to remain well above normal through the remainder of the week.

Double-digit gains in on-peak Monday power prices in California also aided the cause of higher weekend and Monday gas. Intercontinental Exchange reported that Monday on-peak power deliverable to NP-15 rose $18.48 to $46.38/MWh and on-peak power at SP-15 gained $26.41 to $54.21/MWh.

Futures traders see the day’s settlement of the July contract very positively. “We are looking at some good numbers here,” said a New York floor trader. “Natural gas did get some help from the other markets, crude oil was up almost $2, but much of the move natural gas did on its own.

Going forward, traders see weather as the near-term price driver but also don’t see much more than another 10 cents higher in spot futures.

“We are still viewing the short-term temperature views that are now stretching out to about month’s end as sufficiently supportive to force fresh highs into the $2.63-2.68 area that we still view as a favorable sell zone in referencing July futures,” said Jim Ritterbusch of Ritterbusch and Associates in closing comments to clients Thursday.

“While conceding to additional contraction in the supply surplus of another 25-30 Bcf or so in next week’s EIA report, we still see upside to above $2.68 as extremely limited given a supply surplus of 704 Bcf per today’s release. Thus far, a hot start to the summer has accomplished the task of downsizing the storage injections in precluding the need of low prices to accomplish such a task. From here, weather will remain as the main price motivator. But we still see the first significant sustainable cool down as capable of forcing a weak expiration to the July contract. As we shift focus to the August futures contract, any short positions established within the $2.68-2.73 zone should be established or maintained with stop protection above the $2.75 level on a close only basis.”

Buyers for gas-fired power generation in ERCOT were expected to have their hands full over the weekend dealing with triple-digit heat as well as fluctuating renewables. It was expected to be hot, with highs in the 90s to 105 F range. “Elevated humidity levels will push the heat index into the upper 90s to 110 F range,” said WSI Corp. in its Friday morning forecast. “An east-southeast flow off the Gulf of Mexico will increase during Sunday into early next week, [and] this will promote increasing cloud cover and a chance of scattered showers/storms, which will cause temperatures to ease downward into the 90s to near 100.