Although it was a little like watching paint dry, for the week ending May 27 national prices on average took a break from the previous week’s 14-cent plunge and managed to add a penny. At most points prices moved little in either direction and the NGI Weekly Spot Gas Average rose a penny to $1.74. 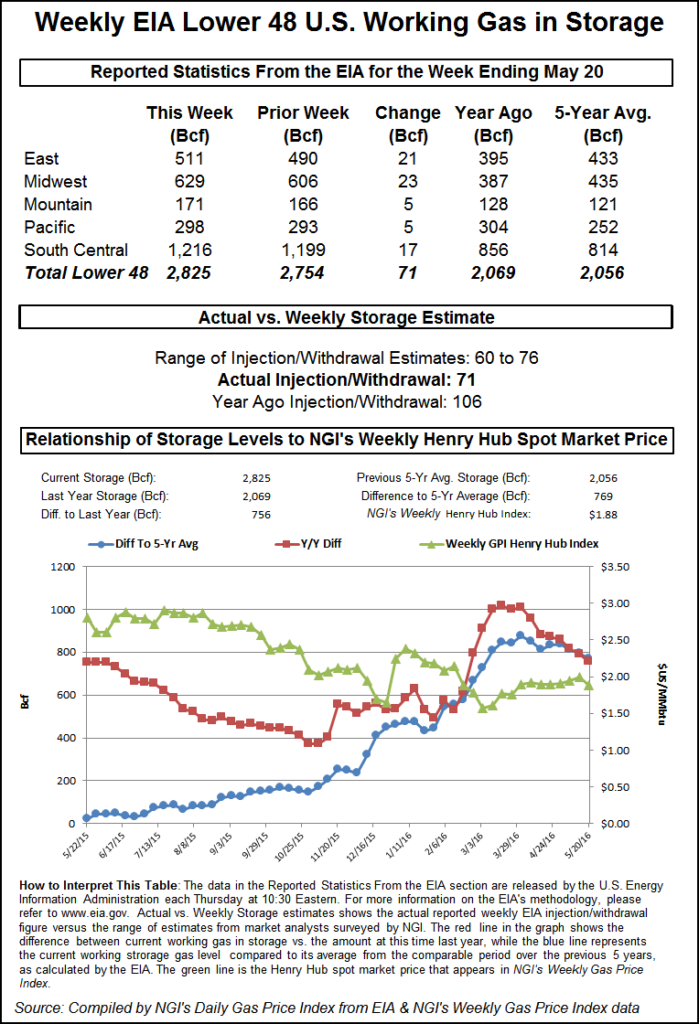 Of the actively traded points the prize for the week’s greatest gains went to the perennially volatile Algonquin Citygate with a rise of 18 cents to average $1.99 followed closely by Tennessee Zone 6 200 L with an advance of 17 cents to $1.97. Bringing up the rear was Northwest Sumas with a decline of 11 cents to $1.41.

Regionally the week’s greatest improvement was in the Northeast with a rise of 8 cents to average $1.63 and California trailed the pack with a slide of 4 cents to $1.78.

Futures fared somewhat worse than cash weekly prices. June futures expired Thursday at $1.963, and couldn’t muster a close higher than the May expiration at $1.995. Spot July for the week skidded 3.8 cents to $2.169.

Traders Thursday had to wrestle with not only the weekly storage report but also the last day of trading of the June contract. The Energy Information Administration (EIA) reported a storage build of 71 Bcf for the week ending May 20, slightly greater than what traders expectations, though well below historical averages. Prices nonetheless slumped and June went out like a lamb. At the expiration Thursday, June settled at $1.963, down 2.9 cents.

The 71 Bcf was about 3 Bcf more than what traders were anticipating, and June futures dropped to a low of $1.914 shortly after the figures were released. By 10:45 a.m. June was trading at $1.935 down 5.7 cents from Wednesday’s settlement.

“I don’t think there is a strong intention to force it [the market lower]. The market is just drifting with a lean towards the downside,” a New York floor trader told NGI

“The 71 Bcf net injection for the week ended May 20 was slightly more than the consensus expectation, but still supportive compared to the 97-Bcf five-year average for the date,” noted Tim Evans of Citi Futures Perspective. “The data followed a bullish surprise in the prior week, suggesting that there may have been some temperature swings at the margin between the two periods. Overall, this could be a modest bearish correction to what had been signs that the background supply/demand balance was tightening.”

“We believe the storage report will be viewed as slightly negative,” said Randy Ollenberger of BMO Nesbitt Burns. “Storage remains at record levels but the level of injections is below last year and points to a rebalancing over the course of the summer. We believe that U.S. working gas in storage could exit the summer season at five-year average levels, assuming normal weather.”

Inventories now stand at 2,825 Bcf and are a stout 756 Bcf greater than last year and 769 Bcf more than the five-year average. In the East Region 21 Bcf were injected and the Midwest Region saw inventories increase by 23 Bcf. Stocks in the Mountain Region rose 5 Bcf, and the Pacific Region was higher by 5 Bcf as well. The South Central Region added 17 Bcf.

Going into the report traders were comparing estimates in the upper 60 Bcf range with last year’s 106 Bcf build and the five-year average build of 97 Bcf. The fact that this week’s report was light years below seasonal norms didn’t register. Analysts at IAF Advisors calculated an increase of 65 Bcf, and a Reuters poll of 20 traders and analysts showed an average 68 Bcf with a range of 60 Bcf to 76 Bcf.

In Friday’s trading for the long holiday weekend and Tuesday, East Texas, South Louisiana and the Northeast led gains, and the NGI National Spot Gas Average rose 7 cents to $1.74. Futures opened weak and seemed poised to trudge lower, but by mid-session, short-covering was able to lift prices into positive territory, if only temporarily. At the close July had added 1.8 cents to $2.169, after trading as low as $2.101, and August had risen 2.0 cents to $2.281.

“We saw a lot of things going on. People were parking a lot of gas this weekend, and demand for that probably created a little uptick here and there,” said a Houston pipeline veteran. “They will park it on the pipeline or in storage. You are buying for a four-day weekend and it does take a little wherewithal to figure that out.”

Northeast gains outpaced major trading centers. Gas at the Algonquin Citygate rose 6 cents to $1.92, and deliveries to Iroquois Waddington gained a nickel to $1.94. Deliveries to Tennessee Zone 6 200 L were flat at $1.85.

Futures traders thought “the market got off the ground like James Brown. It looks like short-covering and not any new longs and people were taking some money off the table ahead of the long weekend,” said a New York floor trader. “If nothing happens the market is set up to get heavy again on Tuesday.”

“Supply is declining (down 2.8 Bcf/d, about 4% year over year in April) and should accelerate on disinvestment while gas continues to take market share from coal,” said Jonathan Wolff, an analyst with Jefferies LLC. “With this note, we are incorporating LNG demand for new U.S. liquefaction (0.3 Bcf/d) into our model. Our seasons-end storage estimate falls to 4.0 from 4.1 Tcf.”

With the 71 Bcf reported Thursday “the refill is very light compared to last year’s 112 Bcf injection and the five-year average of 94 Bcf. Injections have been below prior-year levels in all nine weeks for this refill season thus far.

“Thus far during the ‘refill’ season, injections have been at the lowest level over the past five years. Only 332 Bcf has been injected into storage, well below prior year levels of 622 Bcf, down about 47% year over year. This compares to the five-year average injection of 468 Bcf.

“We continue to believe that injections will remain subdued throughout the summer, on falling U.S. supply on severe disinvestment and northeast bottlenecks. Demand from power and exports (Mexico) continue to increase. Given strong flows into the Sabine Pass liquefaction facility on the Gulf Coast (about 500 MMcf/d over the past two months), we are for the first time including LNG demand in our supply-demand model.

“As with our supply model, we are updating our refill season supply-demand ‘factor’ model for LNG exports. We now model about 300 MMcf/d of demand for LNG ‘manufacturing’ from Sabine Pass Train 1, which we feel is still conservative as the terminal has been running at about 500 MMcf/d over the past two months. We now see Nov. 1 storage at 4.0 Tcf, down from 4.1 Tcf previously, just about 220 Bcf (about 6%) above normal levels.”

Near-term weather was expected to be active but take the form of rain and thunderstorms with little impact on gas demand. “A deep trough of low pressure will push east northeastward across the southern Rockies and the Plains. Daytime heating will trigger showers and isolated thunderstorms over parts of the Sierra Nevadas and the southern Rockies,” said Keri Strenfel, a meteorologist with Wunderground.com.

“Moisture from the Gulf of Mexico will move northward across the Plains and the Midwest. The aforementioned trough will interact with this moisture, which will lead to widespread rain and thunderstorms. Severe thunderstorms will be possible in eastern Texas, southern Oklahoma and southwest Arkansas. These thunderstorms will be capable of producing large hail, dangerous straight-line winds and isolated tornadoes. In addition, heavy rain will bring threats of flash flooding to eastern Texas, eastern Oklahoma, northwest Louisiana, Arkansas, southern Missouri, northeast Iowa, southeast Minnesota and western Wisconsin.”