Both physical and financial natural gas prices suffered what seemed to be a never ending succession of weather outlooks calling for unusual winter warmth during the week that ended Feb. 17. All points followed by NGI fell into the loss column and the NGI Weekly National Spot Gas Average tumbled 20 cents to $2.75. 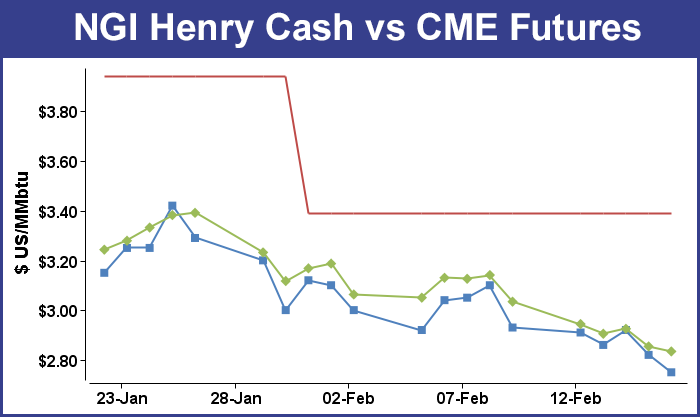 The weakness in the futures arena prompted one analyst to unhesitatingly call for spot futures to tap the low $2.30 range before the end of March.

The market point showing the greatest resilience was the SoCal Citygate with a loss of just a nickel to $3.03, and Transco Zone 6 New York proved to be the week’s biggest loser with a skid of 73 cents to $2.82.

Traders Thursday got a big surprise in the form of storage data that proved to be way wide of the mark. The Energy Information Administration (EIA) reported a storage withdrawal that was significantly less than what traders were expecting. The EIA reported a 114 Bcf storage withdrawal for the week ending Feb. 10, about 10 Bcf less than industry estimates. March futures traded down to $2.865, and by 10:45 a.m. the contract was trading at $2.886, down 3.9 cents from Wednesday’s settlement.

Traders were somewhat surprised initially that the market didn’t fall further. “It looks like it wants to hold here,” said a New York floor trader. “I’m thinking that since it didn’t break under $2.86 it is a sign it wants to work better.” That, however, proved premature.

“The net withdrawal of 114 Bcf was a clear bearish miss compared with the 124 Bcf consensus expectation, implying a weakening of the background supply-demand balance,” said Tim Evans of Citi Futures Perspective. “The draw was also bearish compared with the 156 Bcf five-year average decline.”

Harrison, NY-based Bespoke Weather Services said, “There may be enough bullish weather risk for prices to hold on, but this number certainly tilts risk back to the downside as the market loosens.”

Inventories now stand at 2,445 Bcf and are 303 Bcf less than last year and 87 Bcf greater than the five-year average. In the East Region 41 Bcf was withdrawn, and the Midwest Region saw inventories decrease by 43 Bcf. Stocks in the Mountain Region fell 5 Bcf, and the Pacific Region was down 3 Bcf. The South Central Region dropped 22 Bcf.

Last year 136 Bcf was withdrawn for the week, and the five-year pace was a 156 Bcf pull.

Only one point followed by NGI traded in positive territory, and most locations were down by a dime or more. The NGI National Spot Gas Average for Saturday through Tuesday delivery dropped a dime to $2.60.

Futures continued to struggle after Thursday’s bearish storage report, even though weather models failed to produce any further evidence of additional moderation. At the close, March had dropped 2.0 cents to $2.834 and April was off 2.0 cents as well to $2.951.

Losses were particularly pronounced at eastern points as temperature forecasts saw metropolitan areas nearly 30 degrees above normal. Wunderground.com forecast that Chicago’s Friday high of 65 would ease to 64 Saturday and by Tuesday would be 60. The normal high in the Windy City at this time of year is 36. New York City’s high Friday of 41 was seen jumping to 59 Saturday and falling to 53 Tuesday. The seasonal high in New York is 42.

Power loads over the three-day weekend were forecast to weaken, with Tuesday peak loads less than Friday’s The New York ISO forecast Friday’s peak power load at 20,000 MW but by Tuesday the peak was only supposed to reach 18,952 MW. PJM Interconnection calculated Friday peak power requirements at 35,399 MW, slightly higher than Tuesday’s forecast max of 35,041 MW.

Major market trading points also softened. Gas at the Chicago Citygate fell 12 cents to $2.69, and gas at the Henry Hub was quoted 7 cents lower at $2.75. Deliveries to El Paso Permian came in 8 cents down at $2.47, and packages priced at the PG&E Citygate were seen 6 cents lower at $3.19.

March futures “failed at the end of the day. Traders couldn’t get the market going higher this morning and weaker longs just bailed,” said a New York floor trader. “I’m looking to $2.81 to $2.83 as near-term support. With the weekend forecast to be warmer, there was concern about holding a long position over that period.”

Technical traders following natural gas futures and looking toward the end of the traditional withdrawal season March 31 said the market was “distinctly unambiguous,” with prices en route to a late March rendezvous with $2.30. “There was absolutely no redeeming feature for the bulls this week,” said Walter Zimmermann of United ICAP. “It was Bears 1 and Bulls 0. Late December we peaked into key resistance at $3.99, and an average seasonal decline will take the market down to $2.32 by late March.”

“Given the pace of the decline from late January we are right on schedule,” Zimmermann said.

Overnight weather models changed little. “Overall changes this morning are on the small side with some slight variances toward the cooler direction for the South and West in the one- to five-day with some slightly cooler East Coast conditions early next week (cool wedge in Northeast especially),” said Matt Rogers, president of Commodity Weather Group, in a Friday morning report to clients.

“The six- to 10-day results are mixed with a near-flat West, slightly cooler Midwest to South, and some bigger warmer changes for the East Coast. Warmer East and cooler West changes are noted for the 11- to 15-day range as the models struggle to shift the pattern colder. On the Pacific side, we are seeing an impressive rebuild of Alaska ridging as well as some West Coast high pressure ridging too (in some drying efforts), but on the eastern side of the continent, there is some stubborn, lingering Southeast warm ridge issues that keep the East warmer longer.”

Top analysts see an ongoing weak market. “With above normal [temperature] expectations stretching into the first week of March, the possibilities of a significant price advance of more than 20-25 cents are quickly eroding, with the market likely to shift into a phase of consolidation after the March contract goes off the board at month’s end,” said Jim Ritterbusch of Ritterbusch and Associates in a Friday morning report to clients.

“While the month of March can still offer some significant HDD accumulation, the establishment of an increasing storage surplus will be dampening price impact. As the surplus increases, spread contangoes across 2017 are apt to expand in further, encouraging investment-type interest into the short side given unusually favorable yields when rolling into subsequent month premiums…At the end of the day, this still looks like a very bearish market condition in which attempts to pick a bottom to either outright pricing or the bull spreads should still be avoided for now.”