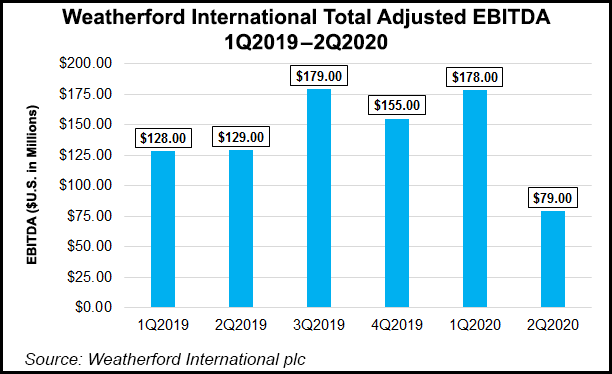 Beleaguered Weatherford International plc, beset for years by internal issues and mounting debt, next month is bringing aboard its third CEO in as many years to attempt to instill a “fresh perspective.”

Incoming CEO Girish K. Saligram, who also has been named president, would take over in mid-October. He previously was COO at Exterran Corp. Weatherford’s interim chief Karl Blanchard would then resume his duties as COO.

“Weatherford is a recognized industry leader for its comprehensive technology portfolio, broad global footprint, extraordinary culture and strong customer relationships,” Saligram said. “I believe these elements serve as a solid foundation for the company to build upon. I look forward to leading Weatherford as we deliver against our strategic objectives and create our next phase of growth and market leadership.”

Weatherford Chairman Charles M. Sledge said Saligram offered “extensive international experience across multiple industries, as well as a deep understanding of the oil and gas sector, and is well positioned to lead Weatherford into the future…We are confident that Girish possesses the leadership qualities, business expertise and fresh perspective that will continue to strengthen the organization and deliver long-term value for all of our shareholders.”

Weatherford, among the top oil and gas services providers in the world, is based in Switzerland with headquarters in Houston. It operates in more than 80 countries with a global network of 19,000 employees and 600 locations.

Former Halliburton Co. CFO Mark McCollum in 2017 took the reins from long-time chief Bernard J. Duroc-Danner. Duroc-Danner had abruptly resigned in 2016 after an investigation by the U.S. Securities and Exchange Commission found financial fraud for inflating earnings with deceptive income tax accounting. Weatherford at that time was fined $140 million.

McCollum was tasked with extricating Weatherford from the financial jam that had been exacerbated by the 2014 downturn in oil prices. McCollum promised a “new chapter,” but the coronavirus pandemic may have created a near insurmountable hurdle.

Following a corporate revamp overseen by McCollum that began in 2018, Weatherford had to file for bankruptcy in 2019 to reduce long-term debt and establish a “more sustainable” business.