Although current climate patterns portend a rather mild winter overall this year, historical comparisons indicate that December could be quite cold, according to WeatherBELL Analytics LLC meteorologist Joe Bastardi. 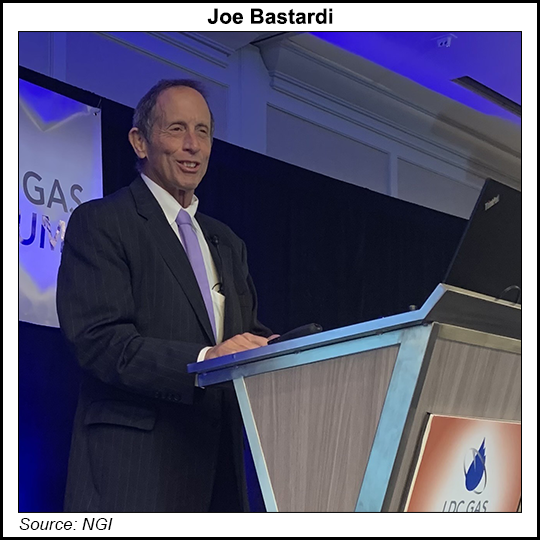 Speaking at the LDC Gas Forums Mid-Continent show in Chicago last week, Bastardi said October weather often is a key indicator of how cold it may be during the November-March winter season. The biggest factor meteorologists look at is water temperature, and current temperatures are quite warm, he noted.

While warmer waters in the U.S. Northeast mean temperatures stay warmer longer, they also serve as a breeding ground for tropical activity, according to Bastardi. It’s been eerily quiet thus far in the Atlantic hurricane season. More than halfway through the 2022 season, there have been only six named storms.

Three of those have become hurricanes, including Fiona that crashed ashore Puerto Rico Sunday and caused a power grid failure before it made a second landfall in the Dominican Republic on Monday. Though no storms so far have been major hurricanes, Fiona could reach that status by Wednesday, according to the National Hurricane Center.

Bastardi is banking on more activity through the end of the hurricane season on Nov. 30. He expects “impressive” hurricanes later this month and in October, likely taking aim at the southeastern United States.

“I’m expecting very heavy total precipitation in the southwest Atlantic, eastern and central Gulf of Mexico and into the Caribbean, whether they’re hurricanes or not,” Bastardi said. “With the way the supply chain is, you get a category 1 or 2 hurricane in Florida, that’ll have the same effect now as a three or four. You won’t be able to quickly get things back up and running.”

The meteorologist attributes the likelihood of heavy precipitation to the strong vertical velocity associated with the Madden-Julian Oscillation (MJO) signal. MJO rotations in late September and October produce a certain pattern, he said. This rotation comes back around later in November and December. The result in October is widespread warmth, along with a wet Southeast with hurricane threats.

“Historical data shows that if you have this signal in October and a hurricane response, then December turns cold,” Bastardi said. “There are too many examples to ignore.”

The meteorologist noted that with current natural gas prices, “if you get cold quick, that really ups the ante.”

Wild intraday price volatility has enveloped the natural gas market throughout the summer, with wide swings taking place and $10/MMBtu gas in play. In some key, high-demand regions, gas prices moved north of $20 this summer as cooling demand escalated and power burns impressed. Such price levels are typically seen in the winter.

Bastardi acknowledged that his forecast may be at odds with others in the market. The National Oceanic and Atmospheric Administration’s Climate Prediction Center shows a likelihood of above-normal temperatures across most of the western and eastern United States, as well as in the southern half of Texas, in the November-January period.

Drawing inspiration from Rocky Balboa from the famed Rocky movie franchise, Bastardi said, “You gotta be a moron — a complete moron — to forecast a cold December, and yet, it’s on the table this year.”