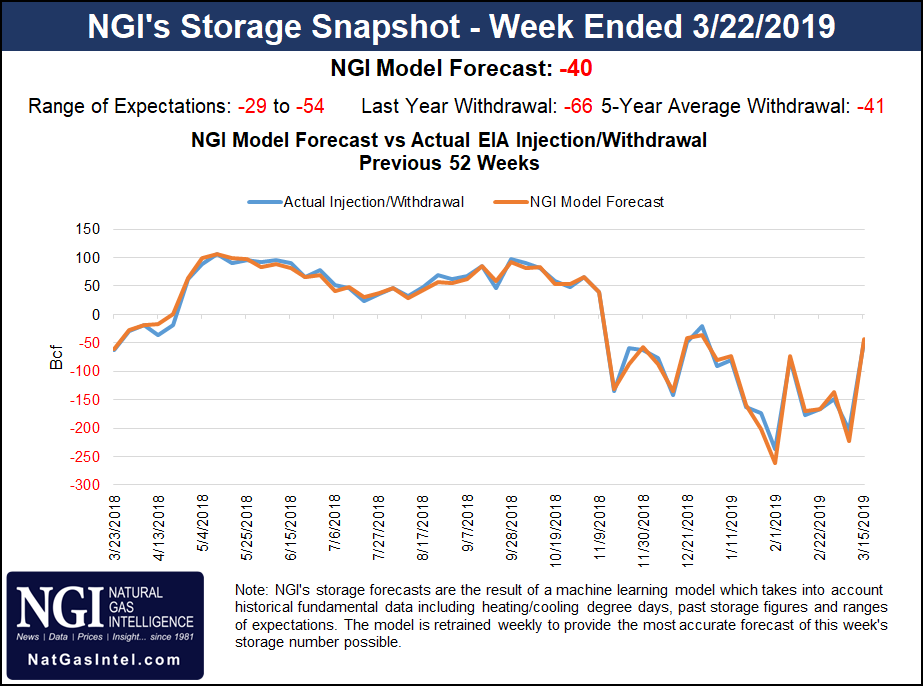 “The risk of weak global LNG pricing eroding U.S. feed gas demand is beginning to garner more attention, as LNG pricing and U.S. exports continue to fall,” the TPH analysts said. They pointed to major Asian LNG benchmarks that closed in the $4.25-4.50 range Tuesday, “likely putting them out of the money versus Henry Hub at $2.75 plus around $2 in variable/transport costs.”

In Europe, Dutch TTF pricing has also been “in freefall” because of storage in the Netherlands and Germany sitting at around 60% above five-year averages, according to TPH.

“However, Europe-destined LNG cargoes should continue to move” as prices at $4.72 as of Tuesday still appear profitable at recent Henry Hub prices plus about $1.50 of variable/transport costs, TPH said. Flow data from Tuesday “indicates U.S. LNG feed gas was 3.9 Bcf/d, or 1.9 Bcf/d below last week’s peak of 5.8 Bcf/d. It remains to be seen how much of this drop-off is strictly due to economics versus planned maintenance, but we do see risk to our 2019 LNG assumptions if weak pricing persists.”

The strip as of Wednesday suggested exports to Asian markets would return to profitability by July, which could mean any downward pressure on U.S. LNG feed gas demand remains confined to the second quarter, according to the analysts.

“That said, losing 2 Bcf/d of demand for the entirety of 2Q2019 would add around 180 Bcf to inventory levels,” the TPH team said. “On our base case we see inventory peaking at 3,750 Bcf (up 1% from the five-year average), while an incremental 180 Bcf would push peak storage towards the high end of the five-year range.”

Estimates Wednesday were pointing to a near-average late-season withdrawal from this week’s Energy Information Administration (EIA) storage report. As of Wednesday afternoon, a Bloomberg survey showed a median prediction for a 41 Bcf withdrawal for the period ended March 22, based on 13 estimates ranging from minus 29 Bcf to minus 54 Bcf.

The midday Global Forecast System (GFS) data came in a touch milder for this coming weekend but showed a slightly cooler pattern late next week, according to NatGasWeather, which described the latest GFS run as bearish but not as much as earlier data from the European model.

“Most importantly, both models show an unseasonably comfortable U.S. pattern on track to arrive April 4-11 with widespread comfortable highs of 60s to 80s for light national demand,” the forecaster said. “We continue to expect this warm bearish pattern will likely last through April 15, if not longer.

“Essentially, after a decent cool shot plays out late this weekend into early next week, weather patterns will be unimpressive thereafter, with the opportunity for record production to improve hefty deficits.”

Looking at the technicals, analysts with Societe Generale said in a note to clients Wednesday they would look for natural gas to move toward $2.70.

“Evolving within a large consolidation, U.S. natural gas has once again faced a stiff hurdle at the highs formed earlier this month at $2.89, also a descending trend resistance,” the analysts said. “It formed a double top at those levels and has now confirmed it giving way to a pullback. Natural gas is likely to show a down move toward the 200-day moving average at $2.70, with next support located at $2.66, the 61.8% retracement from February.”

True to analyst predictions, the constrained conditions in West Texas showed no signs of letting up Wednesday. Sharp declines region-wide saw many traders once again paying double digits or more per MMBtu to unload their gas. Traders at Waha paid 75.0 cents on average.

For all of West Texas, prices averaged negative 54.0 cents Wednesday, somehow managing to undercut the historic lows recorded on Monday, when the regional average finished at negative 43.0 cents.

A force majeure event restricting volumes exiting the Permian Basin through the L2000 constraint on El Paso Natural Gas (EPNG) remained in effect Wednesday. In an update Tuesday, the pipeline said an offline unit at its Florida compressor is now expected back online Sunday, ahead of schedule. An offline unit at the Lordsburg compressor is still on track to return to service April 5, the pipeline said.

In the meantime, the event continues to put the clamp on Permian gas output, which had been on the rise recently. By Genscape Inc.’s estimate, Permian production reached 10.8 Bcf/d for the first time ever this past weekend, about 700 MMcf/d higher than the prior year-to-date average.

On Wednesday, EPNG also updated shippers on an earlier force majeure event associated with its San Juan Crossover. The pipeline said partial progress on repair work would allow it to increase capacity through its “LINCOLN N” location by 89,900 Dth/d starting Wednesday. Operational capacity through the location remains constrained at 496,100 Dth/d, versus a base capacity of 623,600 Dth/d.

Meanwhile, Transwestern on Wednesday notified shippers of a force majeure event from a mechanical failure at the Unit 102 Compressor at its WT1 Station in Carlsbad, NM. The pipeline resolved the issue by Wednesday afternoon and said it would be increasing WT1 receipt volumes to 630,000 MMBtu/d from 550,000 MMBtu/d starting with the Intraday 2 cycle.

Southern California Gas (SoCalGas) has delayed the return to service of its Line 235-2 and Line 4000, two critical import lines for the utility, according to Genscape analyst Joe Bernardi. Previously expected to be fully restored by next week, L235-2 is now expected to resume flows at a reduced pressure starting May 4, according to the analyst.

“Capacity through L235-2 has been limited for over a year and a half following a force majeure explosion,” Bernardi said. “SoCalGas discovered two additional leaks on this line during testing on Saturday (March 23) and concluded that the required additional work would take at least one month to complete.

“L235-2 exploded on Oct. 1, 2017. It is one of three significant import lines that required unplanned reductions that fall. Those reductions — combined with restrictions already in place at the Aliso Canyon storage facility — significantly exacerbated price volatility for the Southern California gas market.”

The delays bringing L235-2 back online have also pushed back the work schedule for the L4000 line, as SoCalGas plans to begin work on that line once L235-2 is back in service, according to Bernardi.

“Before these two newest leaks on L235-2 were announced, SoCalGas was expecting this capacity reduction to remain in place through June 1, when the reduction was to change from 1,067 MMcf/d to 900 MMcf/d. That is, there were no changes to flow capacity expected from the return of L235-2 alone,” the analyst said. “SoCalGas has not yet provided an updated maintenance calendar showing how its future operating capacity expectations may change as a result of this newest delay.”

With mild temperatures forecast throughout the Lower 48, discounts of a nickel or more were the norm for most regions.

Steeper losses in the Northeast accompanied forecasts for a significant warm-up from chilly temperatures earlier in the week.

“Over the southern U.S. and the East Coast, an expansive area of high pressure should maintain a relatively tranquil weather pattern over the next couple days,” the National Weather Service said. “Areas of precipitation should be limited, other than some light showers in the interior Northeast, and temperatures are expected to gradually warm up through the end of the work week.”

Radiant Solutions was calling for temperatures along the Interstate 95 corridor to flip from around 5 degrees below normal Wednesday to 10-15 degrees above normal by Saturday, when Boston and New York were expected to see highs reach the low- to mid-60s.

Maintenance could cut close to 0.4 Bcf/d of flows through Transco’s Zone 4 in Alabama “well into mid-April,” but milder shoulder season demand levels and re-route options should mitigate the market impact, according to Genscape analyst Josh Garcia.

Starting Friday (March 29), Transco is scheduled to begin modifications on its Mainline E near Station 84 in Zone 4, the analyst said.

“Capacity at the Scott Mountain interconnect with Gulf South in Choctaw County, AL, will be limited to 750 MMcf/d from April 1-20,” Garcia said. “Scott Mountain is the single largest interconnect on Transco, maxing out at 1,426 MMcf/d in receipts over the last 30 days, although flows have trended downwards over the last few weeks with warmer weather. The capacity reduction will restrict about 387 MMcf/d compared to the previous two week average.

“Several factors are mitigating the upside risk of this event,” according to the analyst. “Temperatures in the Southeast are getting milder by the day, and demand should move to shoulder season ranges pending weather volatility. Furthermore, Transco has two other receipt interconnects with Gulf South in Zone 4 in the Holmesville or Walthall meters, which have averaged around 450 MMcf/d in available capacity over the last 30 days.”