The expected continuation of weak commodity prices dimmed the outlook for the remainder of the year at Kinder Morgan Inc. (KMI), which is feeling the effects of production declines, particularly in the Eagle Ford Shale. 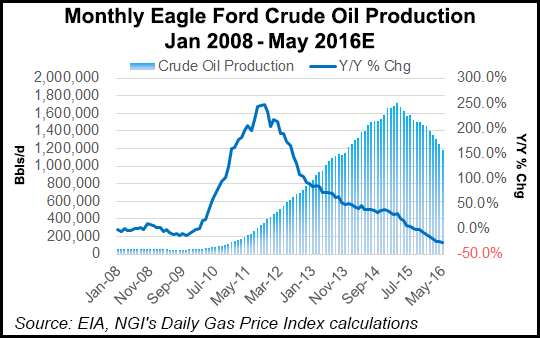 “…[W]e have looked at the potential impacts for the remainder of 2016 due to continued weakness in the sector. We now estimate on a full-year basis for 2016 a negative impact of about 3% to the EBITDA [earnings before interest, taxes, depreciation and amortization] that we showed in January,” CEO Steven Kean told analysts Wednesday afternoon. “But because of our ongoing efforts to high grade our capital spend and to pursue the joint ventures where it makes sense, we expect to meet our investment grade credit metrics, notwithstanding the 3% reduction.”

The 3% reduction in EBITDA yields a 4% reduction in distributable cash flow (DCF). “As the year goes on, we will try to mitigate that negative, but we are not assuming in this outlook any dramatic turnaround for our producer customers by the end of the year as some analysts have predicted,” Kean said.

“…[B]ut I think when you put this in the context of the dramatic production declines particularly in the Eagle Ford, which is down 28% on oil from its peak and 15% on gas and credit weaknesses, our business is really diversified and insulated from the full brunt of the weakness in the producing sector.”

Kean said nearly half of the deterioration was due to lower volumes out of the Eagle Ford. These affect both the midstream group in the company’s natural gas business unit and also its refined products group.”…[T]his is all comparing to our original outlook, so this is not a year-over-year look; this is versus our January outlook that we presented at the [investor] conference,” Kean said.

Coal industry bankruptcies led to another 20% of the deterioration, he said.

Kean also addressed counterparty credit risk. KMI has called on collateral and put other credit-support arrangements in place, he said.

“Given our diverse business mix, we’ve got a very broad and diverse customer base,” he said. “We’ve got producer customers, of course, but we also have integrated energy companies, gas and electric utilities and industrial users of our services. We’re not exposed to any single sector, commodity or service. That diversifies our exposure, which reduces our risk. Our top 25 customers constitute 44% of our revenue. And of that revenue, 85% is investment grade. Of our total revenue, about 75% is investment grade or has substantial credit support and 86% is rated ‘B’ or better.”

First quarter net income was $446 million compared to $445 million for the same period in 2015, with the increase driven by higher segment earnings offset by higher depreciation, depletion and amortization (DD&A) expense, book taxes, and general and administrative expense.

For 2016, KMI’s budgeted DCF is $4.7 billion and budgeted EBITDA is $7.5 billion. “Due to continued weakness in the energy sector in 2016, the company now expects EBITDA to be about 3% below its plan and distributable cash flow to be about 4% below its plan. KMI expects to generate excess cash sufficient to fund its growth capital needs without needing to access capital markets and expects to achieve its targeted year-end debt to EBITDA ratio of 5.5 times.”

“We reduced our growth capital backlog from $18.2 billion at the end of the fourth quarter 2015 to $14.1 billion at the end of the first quarter 2016,” said CEO Steve Kean. “The reduction in our backlog was driven primarily by the removal of the Northeast Energy Direct (NED) Market project due to insufficient contractual commitments from customers in the New England market [see related story], and the removal of the Palmetto Pipeline project following unfavorable action by the Georgia legislature regarding eminent domain authority and permitting for petroleum pipelines” (see Daily GPI, March 31).