Washington regulators are moving ahead to restrict oil rail offloading that has led North Dakota officials to call for federal assistance to move Bakken Shale crude to the West Coast. 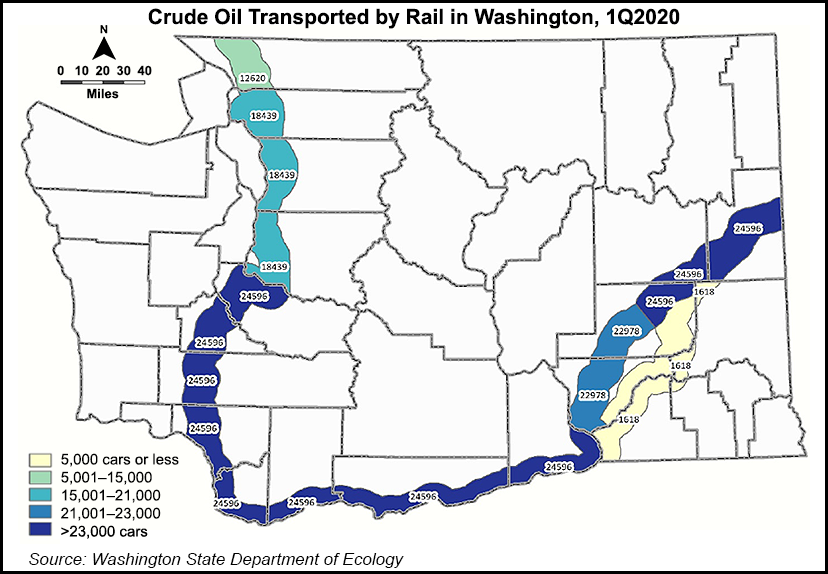 It’s a standoff between the states, with North Dakota claiming U.S. Constitution violations and Washington contending a state law does not prevent crude shipments from entering the state but they require vapor pressure testing when unloaded.

The Washington Department of Ecology is undeterred by a U.S. Department of Energy (DOE) report by Sandia National Laboratories that concluded Bakken crude can be safely transported by rail as there is difference among the oil supplies.

“We’re aware of the DOE report that summarizes three studies completed by Sandia to characterize crude oil properties, such as vapor pressure and composition,” Keltner said. “However, it does not include new research or address concerns that Washington has with the Sandia studies.”

“The state legislature has directed the Department of Ecology to conduct this work, and we will continue to implement this act, unless instructed otherwise,” Keltner said. “No matter the situation, safety to the public, first responders and the environment are our priority.”

North Dakota Department of Mineral Resources Director Lynn Helms said the Washington law is inconsistent with federal standards, setting a precedent that “one state can restrict another state’s ability to move its own natural resources across state borders.”

North Dakota is optimistic the U.S. Department of Transportation’s Pipeline and Hazardous Materials Safety Administration will exert its authority and preempt the Washington law, Helms said.

The North Dakota Industrial Commission six years ago established rules on conditioning crude supplies before they are shipped.

North Dakota officials acknowledge there are other options, and the state does not have the market, infrastructure or the other facilities needed. “Options like stabilization are much more burdensome and costly than conditioning,” Helms said. “It is the choice of some producers because of the benefits of having a market for byproducts and existing or planned infrastructure for transporting the byproducts.

“Texas does not require stabilization, but there are some parts of the Eagle Ford Shale where they produce condensate that use the method.”

In the Eagle Ford, Helms said, are large industrial facilities and pipelines for moving byproducts, which he said are more volatile than Bakken crude.