To the chagrin of the oil and gas industry, Washington state for the second time in two years has placed an initiative on its ballot to establish the first carbon tax in the United States. 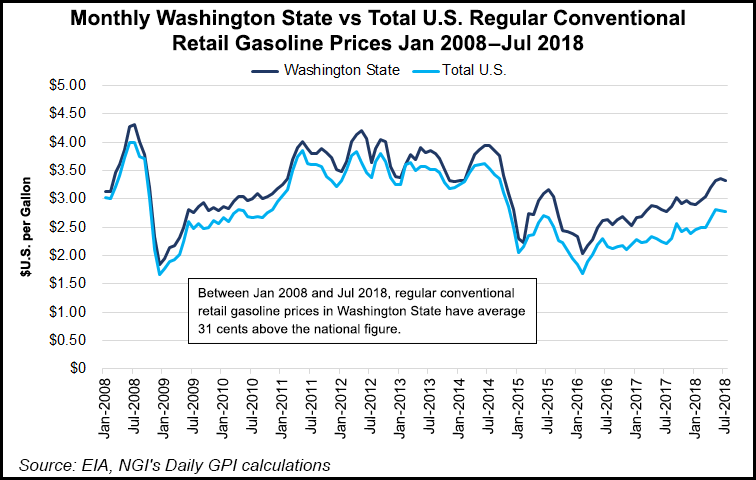 The Clean Air, Clean Energy Initiative 1631 (I-1631) has been qualified for the November ballot by the state Secretary of State’s Office with nearly 350,000 signatures submitted. I-1631 met the three main criteria, with signatures from at least 259,622 registered voters submitted by the July 6 deadline, and sponsors submitted at least 325,000 signatures to allow for invalid signatures to be discounted.

According to a study done earlier this year by the Washington Policy Center, I-1631 carries a $500,000 price tag and would create a 15-40 cent/gallon increase in gasoline prices at the pump. The 38-page initiative also has a number of questionable provisions, according to the council.

If it were to pass, families would pay in three ways, according to the policy center — at the fuel pump, for heating and for electricity. An average residence in Seattle initially would pay about $170 annually, increasing to $510/household in 2029. In the Spokane area, the numbers are slightly higher, the study indicated.

Under I-1631, Washington state would apply the nation’s first direct fee or tax on carbon emitters, imposing the levy on carbon content of fossil fuels sold or used and in the electricity consumed. A fee of $15/metric ton of carbon content would be assessed starting in 2020, after which the fee would increase annually by $2/metric ton.

Several sectors that are energy intensive and exposed to international competition are exempted, according to the latest analyses of the measure.

The Western States Petroleum Association (WSPA) is urging voters to reject the measure and instead work to create market-based programs for reducing greenhouse gas (GHG) emissions.

“The petroleum industry in Washington supports well designed, market-based programs to reduce GHG emissions,” said WSPA’s Kara Siepmann, strategic communications manager. “Unfortunately, the program I-1631 would impose will not meet the intended carbon reduction goals while, according to a Washington Policy Center study, raising costs on consumers and industry.”

In 2016 Washington voters rejected a ballot measure to create a carbon tax, with 58% opposed to Initiative 732. At the time the supporters for Carbon Washington expressed disappointment, but also signaled that they planned to resurface the issue in future elections.

I-1631 supporters contend they are a broader coalition than the backers for the 2016 effort, including this year environmental, organized labor, Native American tribes and social-justice activists.