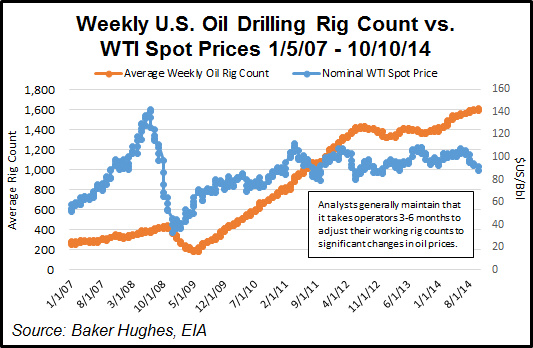 Kibsgaard spent an hour Friday discussing the company’s latest quarterly results and his macroeconomic take on North America and world markets. The company late Thursday reported that its 3Q2014 profits were driven by strong growth from North America and new technology offerings.

The recent plunge in Brent and West Texas Intermediate (WTI) crude oil prices has been a concern in recent days, with some analysts questioning whether it may lead to a pullback in drilling (see Shale Daily, Oct. 16; Oct. 15). Baker Hughes Inc. CEO Martin Craighead had said Thursday North American unconventional oilfields were unlikely to take a drilling hit, as U.S. drilling continued to be economic at WTI prices of $60-70/bbl. However, uncertainty in the markets alone could lead to a slowdown, said Kibsgaard.

Slower pricing “is a function of activity,” he told analysts. “We agree that it’s too early to say what’s going to happen in 2015…But there are two scenarios here. At a lower WTI, there will be further cost inflation, and that likely will have an impact on spending growth rates. If there is a recovery in the WTI and limited cost inflation, these are factors that support further spending growth…”

However, the function of activity would depend on how much horsepower had been ordered by onshore drillers ahead of time. “A fair bit already is on order,” Kibsgaard said. If explorers are budgeting less, though, it “puts pressure on pricing on both sand and transportation as well.”

Schlumberger, like its peers, has been working on price increases in North America to recover higher costs for transport and sand services. “It’s the main way to drive margins in the North American proppant business,” along with efficiencies and new technologies that increase production and lower costs, said the CEO. “Our main focus is to pass the cost inflation to customers. Given the state of free cash flow and oil prices, the appetite is lower on further cost increases that they are willing to take.”

Schlumberger is the No. 1 oilfield services (OFS) operator in the world, with more than half of its profits from North America. Halliburton, the No. 2 OFS, is to report quarterly earnings on Monday.

Schlumberger’s Gulf of Mexico operations were impacted, as were Baker’s, by strong loop currents that shut down some rig work during the third quarter. However, not all of the rigs that Schlumberger provides services for were impacted, and the uptick in North American land and Canada’s offshore overcame the shortfall. “When you have a certain size, it’s easier to absorb,” the CEO said.

Geographically, the latest quarter’s results were led by North America and driven by Canada, where there was a strong seasonal rebound and “significantly” higher east coast offshore activity. As well, U.S. land was strong in spite of adverse weather in the Permian Basin of Texas, where rain and flooding impacted some operations.

To strengthen its growth platform in North America, Schlumberger entered into a technology and service alliance with drilling contractor Precision Drilling Corp. in July to provide Precision access to bottomhole drilling technologies and services for 300-plus of Precision’s land rigs. Bottomhole assemblies already have been deployed on 27 wells in seven different basins in U.S. land and Canada.

Schlumberger also deployed some new unconventional technologies in North America during the quarter. In the Eagle Ford Shale, the BroadBand Sequence fracturing (fracking) technique was used for BHP Billiton Ltd. to increase a fracking treatment in new horizontal wells. In an eight-well pilot test, three wells were completed to enhance wellbore perforation coverage beyond conventional fracking treatments. After 210 days, a 22% increase in normalized production was realized from wells in which the technique was implemented compared to an average of five offset wells, Schlumberger said.

In the Permian Basin, the company’s ThruBit logging services were used for Atlantic in the Permian Basin to optimize completions on a 27 horizontal well program. The engineered completions yielded an increase in average well production compared with offset wells completed geometrically. In addition to increased production, Schlumberger said stimulation costs were decreased by lowering breakdown pressures and eliminating screenouts.

The Diamondback composite drillable fracking plug technology was deployed also for BHP in the Eagle Ford to eliminate pre-set plug events and associated nonproductive time in well completions. Previously, BHP had incurred an average of more than two pre-set plug events and more than 31 hours of associated nonproductive time per month, Schlumberger noted. Diamondback composite plug technology helped overcome technical challenges and contributed to zero pre-set events for seven consecutive months and increased the average number of plugs set by one-third. As a result of the elimination of pre-set plug events, the customer was able to save about $200,000 per event, it said.

As he usually does during quarterly conference calls, Kibsgaard offered his macroeconomic take on the global economy, noting the oil supply/demand scenario actually is better balanced than some perceive it to be.

“Given the strength of the U.S. economy and the ongoing efforts to stimulate and manage growth in Europe and China, we continue to believe that the slow but steady recovery in the world economy is intact,” he told analysts. “While market sentiments are currently driven by fear of short-term oversupply, and although the oil demand outlook has been revised slightly downwards, we see little reason at the present time to change our view that the challenges of maintaining non-OPEC supply outside North America, the lack of growth in OPEC sustainable production capacity maintaining tightness in OPEC spare capacity, and the continuing geopolitical risks in some key producing regions all lead to a supply-demand situation that is relatively well balanced.

“Our view of the overall market continues to include a mix of economic and geopolitical headwinds and tailwinds. We therefore maintain the long-term hypothesis that we outlined in New York in June, believing in continued solid demand for our products, services, and expertise,” which he provided during a two-day investor conference (see Daily GPI, June 26). “We also firmly believe that opportunities exist for differentiated growth through new technology and greater integration, and that the transformational impact of our initiatives in reliability and efficiency will further support and accelerate our financial outperformance.”

Analysts with Tudor, Pickering, Holt & Co. said the 3Q2014 results showed why SLB is a “best-in-class: oilfield service company. “They executed well in a tough environment.” The North American results “drove 4 cents of the 5 cents overall for the earnings per share outperformance” versus TPH expectations on “very balanced (AND strong) revenue growth,” with offshore profits up 12% and land up 9%.