Following a tricky 2021 that has included a major disruption to its natural gas supply, the Mexican government is advancing plans for strategic storage. 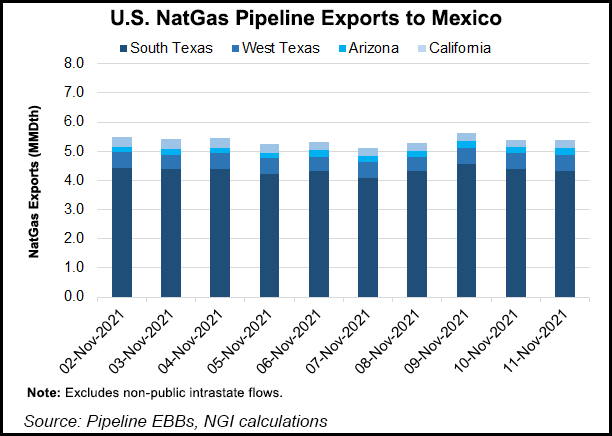 Speaking Tuesday at the U.S.-Mexico LDC Forum in San Antonio, TX, Gadex consultant Eduardo Prud’homme said “good discussions” were underway with a developer to build a salt dome storage facility in Veracruz. “It’s very probable we will hear about it soon,” he said.

The storage project would have capacity to store 6 Bcf/d of natural gas, or about the equivalent of a typical day of pipeline imports from the United States. Sistrangas system operator Cenagas would be able to access 600 MMcf/d, Prud’homme said, and the facility could be ready to go as early as 2023.

Mexico’s Energy Ministry (Sener) has previously said the salt cavern storage option would serve the central and southern zones of the country. It would take an estimated two years to develop and require $318-481 million in investment.

Prud’homme said the only other gas infrastructure project likely to be undertaken in Mexico during the current administration, which comes to an end in 2024, was the Leona Vicario hub.

The 1 Bcf/d Leona Vicario hub would serve the southeastern states of Tabasco, Campeche, Yucatán and Quintana Roo and take up to three years to develop. The estimated $18.5 million project is meant to provide gas supply optionality for the Yucatán region amid declining production by state oil company Petróleos Mexicanos (Pemex).

The project is deemed critical to the Mexican government because it would eventually supply natural gas to the Dos Bocas refinery, the principal infrastructure project of President Andrés Manuel López Obrador’s government.

Why Are Natural Gas Prices Falling?

Natural gas prices for end users in Mexico have eased somewhat to date in November after a record-setting October. On Wednesday, futures prices in the United States dropped for a fourth straight day, with the December Nymex contract down 9.9 cents to $4.880/MMBtu. January fell 9.6 cents to $4.974.

Part of the decline in prices is based on higher production from U.S. producers, loosening a tight market. U.S. production was estimated to be around 95 Bcf this week, up from about 92 Bcf in October. Weather forecasts have also trended to the milder side.

Export demand has also leveled off somewhat with the European supply picture looking better with increased gas flows from Russia. Mexican imports from the United States are also falling. NGI calculations had the 10-day average at 5.37 Bcf/d through Thursday. Imports were consistently above the 6 Bcf/d mark through the summer.

At points key to Mexico trades in South Texas, December futures were down across the board on Wednesday day/day and by about $1.00 from a week earlier. The Henry Hub December contract closed at $4.893, down 9.9 cents day/day. Agua Dulce was down by 7.4 cents at $5.085. Houston Ship Channel prices for December settled at $5.036, down 7.4 cents.

Demand on the Sistrangas on Wednesday was 4.686 Bcf from 4.709 Bcf a day earlier. Mexico gas production fed into the system was 1.286 Bcf. Southeast production dominated the total, with 740 MMcf/d from the region injected into the pipeline system on Tuesday.

On Wednesday, the U.S. Energy Information Administration (EIA) reported an injection of 7 Bcf into natural gas storage for the week ended Nov. 5. The result was slightly under market expectations. The EIA’s weekly inventory report was released one day earlier than normal because of the Veterans Day holiday.

The South Central region injected 3 Bcf into storage, which included a 4 Bcf injection into salt inventories and a 2 Bcf withdrawal from nonsalt facilities. Until Mexico develops its own storage capability, this is the storage system most readily available to the country.