Chesapeake Energy Corp. is exiting Ohio’s Utica Shale, a play it pioneered, in a $2 billion divestiture to Houston-based startup Encino Acquisition Partners (EAP), which has plans to aggressively develop the 900,000 net acres. 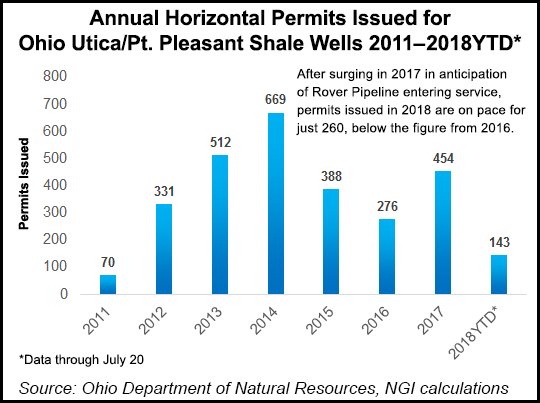 Chesapeake, long a natural gas-focused producer, has shifted to an oilier mix in recent years to help strengthen the balance sheet. Under CEO Doug Lawler, the company has also been assiduously focused on cutting billions in debt and had not ruled out selling one of its major assets.

“Our unwavering commitment to reducing our debt, maintaining capital discipline, removing legacy complexities and simplifying our business has made Chesapeake more competitive,” Lawler said. “Over the past five years, we have fundamentally transformed all aspects of our company, eliminating more than $12 billion in total leverage, reducing our total midstream and downstream commitments by more than $10 billion, erasing more than $1 billion in annual cash costs and removing operating leases, subsidiary preferred equity, four minimum volume commitments and nine volumetric production payments.”

He added that the Utica divestiture would help the company further improve its margins, drive more capital efficiency and significantly reduce debt.

The Canada Pension Plan Investment Board (CPPIB) and Encino Energy formed EAP last year to acquire “large, high-margin” oil and gas assets in the Lower 48. CPPIB plans to invest $1 billion in the startup and would own 98% of the partnership. Encino, founded in 2011, would also invest and operate the acquired assets on behalf of EAP. The company said it plans to operate multiple drilling rigs on the Ohio properties to “build a large, well-capitalized” exploration and production (E&P) company that would increase production and cash flow in the Utica.

CPPIB’s Avik Dey, head of energy and resources, said the acquisition provides the fund with “meaningful exposure to a leading North American natural gas play and aligns with the growing focus on energy transition. He added that the transaction “represents a unique opportunity to acquire a foundational asset that has a large inventory of wells with a well-established production history, and will be managed by Encino, whose management has deep operational and development expertise in the Appalachian region.”

Indeed, Murchison, who founded Encino, spent 10 years at First Reserve Corp., which has been active throughout the basin. He has also worked with Marcellus Shale heavyweight Range Resources Corp. EAP said it would work closely with Chesapeake’s Utica employees to continue developing the assets.

The transaction is expected to close before the end of the year. The purchase price also includes a $100 million contingent payment based on future natural gas prices, leaving Chesapeake with $1.9 billion to cut down debt if the deal closes.

While Chesapeake is reducing its full-year gas and natural gas liquids volume guidance, it’s raising oil production guidance by 500,000 bbl and now targeting 1-5% year/year production growth. Chesapeake said it would realize a $450 million reduction in projected 2019 gathering, processing and transportation expenses related to the Utica, a 50 cent/boe price uplift and the elimination of all future Utica midstream and downstream commitments to the tune of $2.4 billion.

Under the leadership of late co-founder Aubrey McClendon, Chesapeake was among the first to develop the Utica, arriving years before the play gained steam to scoop up land and test its luck. The Ohio Department of Natural Resources’ first commercial production report from the play in 2012 included only Chesapeake production wells that had first come online in 2011. Last year, Ohio E&Ps produced roughly 1.8 Tcf, almost entirely from the Utica, according to the Ohio Oil and Gas Association’s annual Debrosse Memorial Report.

But for the first time earlier this year, Chesapeake forecast a decline in natural gas volumes and said they would be replaced with oil volume growth. While the Eagle Ford Shale of South Texas has driven those gains, the company has also been intently focused on the Powder River Basin’s (PRB) Turner formation, a tight sands oil play in Wyoming. It recently added a fifth rig to focus on other formations there, such as the Parkman, Sussex, Niobrara or Mowry.

The company said in its update Thursday that PRB production has increased 78% from 4Q2017, reaching a new record on July 22 of 32,000 boe/d, with a 42% oil cut. The company now projects that production from the PRB will reach 38,000 boe/d in the coming months and expects production to double there next year compared to 2018 volumes.

The company still has a substantial position in the Pennsylvania Marcellus, as well as the Midcontinent, Eagle Ford and Haynesville shales.

Chesapeake’s shares, traded on the New York Stock Exchange, rallied in after-hours trading following Thursday’s announcement. They were up by nearly 4% on Friday morning to about $4.56/share.