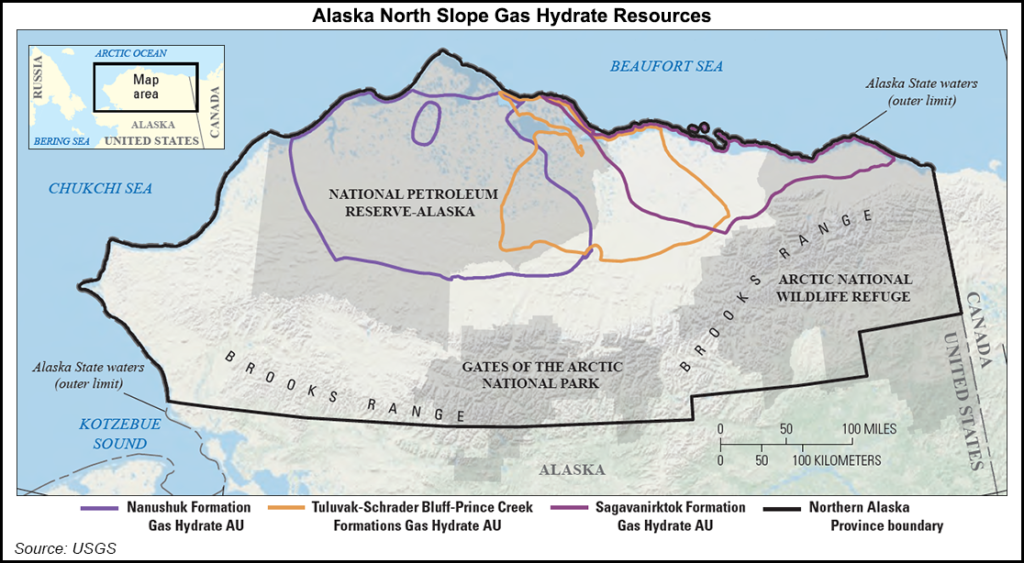 The latest assessment is the first since the initial study in 2008, which had estimated the North Slope held 85 Tcf of resources. The assessment 10 years ago was the first-ever of technically recoverable gas resources within gas hydrate.

The new assessment relied on more extensive 3-D seismic mapping, improved data collection and a more refined analysis, which “yielded a smaller gas volume estimate in the 2018 assessment when compared to the 2008 assessment.

The updated assessment approach assumed that the resource may be produced with existing conventional technology.

USGS provided no analysis as to whether it would be profitable to produce the North Slope gas hydrates, which are naturally occurring solids in which water molecules trap gas molecules in a cage-like structure. Gas hydrates are only stable “within a narrow range of temperatures and pressures and are usually found in seafloor sediments and in Arctic onshore permafrost environments,” officials noted.

Many gases form hydrates in nature, but methane hydrate is the most common, and there are thought to be significant resources in the world’s gas hydrate accumulations.

“The study of gas hydrate as an energy resource is still an emerging field,” said USGS scientist Tim Collett, lead author of the assessment. “The USGS has been conducting research on gas hydrates since the 1980s. Every time we conduct these assessments, we incorporate more and higher quality data, and our estimates become more precise.”

Partnering with the Department of Energy, the Bureau of Land Management, the Bureau of Ocean Energy Management and Alaska state agencies, as well as international, industry and academic partners, the USGS has analyzed gas hydrate formations throughout the United States and around the world.

In addition to the Alaska North Slope research, the USGS Gas Hydrates Project has investigated the resource potential in the U.S. Atlantic Ocean, Gulf of Mexico and Beaufort Sea margins.