Oil shippers would open space in plugged Canadian export pipelines, currently running at 98% capcity, by improving the quality of their product, the National Energy Board (NEB) said.

The molasses-like, low-grade product was about 2 million b/d, or 56%, of Canada’s 3.6 million b/d of oil exports to the United States in 2018, according to the report “Optimizing Oil Pipeline and Rail Capacity out of Western Canada.”

The board estimated that rising Canadian natural gas liquids output could replace most bitumen thinner imports in as little as two years. It added that Enbridge and Kinder Morgan pipelines could be converted into oil export routes.

The new NEB report recited doubts about bitumen upgrader and rail shipping schemes that surfaced in a board canvass of 30 industry participants and expert agencies for cures to the Canadian export pipeline bottleneck.

“There are several potential solutions to further optimizing capacity but most of them would require structural changes to the market, significant investments, and a long time horizon,” NEB said. “However, uncertainty regarding if and when incremental pipeline capacity will come online has ripple effects across industry by hampering investment decisions…

“Rail is not a perfect substitute for additional pipeline capacity. Moving crude by rail is more expensive and becomes less economic if price differentials [discounts inflicted on low-grade bitumen] narrow.”

The board added that “arranging transportation for crude by rail has a long lead time and impacts shipment of other goods.” As a result, “any policy action has the potential to create unintended consequences given the complexity of the system.”

A less disruptive, cheaper and faster partial answer would be creation of a Canadian counterpart to the U.S. Energy Information Administration (EIA), NEB said. The board predicted following the American example of timely, free public reports on industry behavior would enable improved marketing and production planning.

“For example, if small producers knew storage was almost completely full or that refineries were shut down, then they could anticipate not being able to sell or store their product, and might decide to reduce production. Data regarding refinery crude runs and refinery outages would also be beneficial for most market participants for planning purposes.”

The only casualties of creating a Canadian counterpart to the EIA would be consulting firms that currently compile industry data packages and sell them for high service fees, the board said. 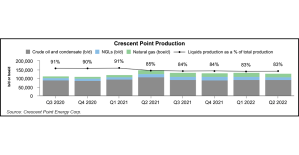