Population centers across the Northeast, North Central and lower Mississippi Valley can expect this winter’s unusually cold temperatures to continue through most of the next three months, while the Southwest and parts of the Southeast will see a bit of a warm-up, according to forecasters at Weather Services International (WSI). 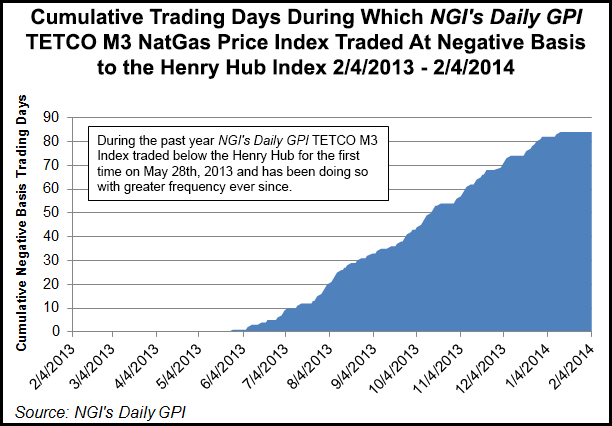 Six weeks ago, WSI and other forecasters were expecting temperatures to average warmer than normal across much of the United States through March, with the exception of parts of the North Central and Northeast regions (see Daily GPI, Dec. 20, 2013; Nov. 21, 2013). But that was before multiple polar vortices brought chilling cold to a large swath of the country last month. And an unusually cold pattern is set to continue over the next three months, WSI said.

“Persistent and strong ridging in the North Pacific has resulted in a very cold winter so far across the North Central U.S.,” said WSI Chief Meteorologist Todd Crawford. “In fact, some reporting sites in northern Minnesota have observed the second or third coldest winter on record so far. The latest data suggests that there is no end in sight for the North Central U.S., and that the heart of the cold will remain focused there in February.

“We expect the bulk of the above-normal temperatures to be confined to the Southwest and drought-plagued California, as the tropical Pacific [sea surface temperature] forcing that has driven the winter pattern so far remains in charge.”

March should bring a relative warm-up to some areas, with the Boston to Washington, DC, corridor, the Northwest and South Central areas all moving into the warmer-than-normal category, according to WSI. The western portion of the Northeast and northern North Central will remain colder than normal, the forecasters said.

“With mild temperatures expected throughout much of the country in March, natural gas prices can be expected to ease lower from higher levels induced by the below-normal temperatures of January and February,” Kostas said. “While reduced natural gas inventory levels at the end of the heating season would help to support prices, the spot market has shown significant price weakness during periods of slack demand. Weak power and gas prices can be expected in the Mid-Atlantic region, where Marcellus natural gas production has helped to crush spreads to Henry Hub recently. Negative daily prices spreads between Tetco M3 and Henry Hub have been observed during mild days in January, for example.”

NGI’s Daily GPITetco M3 Index traded below the Henry Hub for the first time on May 28, 2013 and has been doing so with greater frequency ever since.

“Weather-related demand is typically light in April, so the effects of this temperature pattern should be muted,” Kostas said. “Generator maintenance and low ending-season inventories should help to support natural gas prices, however. Increased natural gas production and slack demand in the South and West should help to offset these bullish pressures and help to stabilize energy prices in April.”

Last month’s polar vortex and predictions of continued cold have prompted some energy analysts to revise their forecasts upward for U.S. natural gas prices (see Daily GPI, Feb. 3). Analysts have said that sustained unusually cold weather could lead to storage levels around 1.2 Tcf by the start of April, possibly keeping gas prices higher through the year (see Daily GPI, Jan. 24). And industry consultant Genscape Inc. said recently that it could be months before production returns to normal following freeze-offs that impacted billions of cubic feet of natural gas production in the Marcellus and Utica shales during January (see Daily GPI, Jan. 31).