Opposition is growing for two natural gas power plants that together would add nearly 1,700 megawatts (MW) to the electric grids of New England and New York. 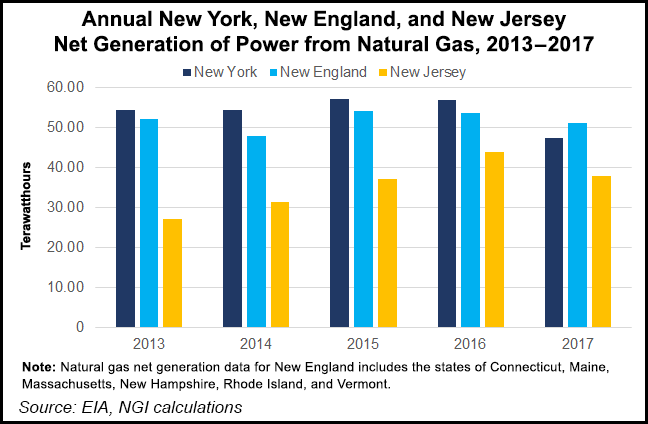 The Independent System Operator New England (ISO-NE) potentially put the kibosh on a contentious combined cycle power plant proposed in Burrillville, RI, after it asked federal regulators to terminate the plant’s Capacity Supply Obligation (CSO). In a FERC filing last Thursday, ISO-NE said it no longer wants the 485 MW Clear River Unit 1 plant being developed by privately held renewable energy company Invenergy LLC, as it does not believe the plant can be completed in time to deliver the power it has promised.

The electric grid operator said little progress has been made to begin construction since Clear River Unit 1 first obtained a CSO in its 10th forward capacity auction. Through ISO-NE’s forward capacity market, it pays resources that provide capacity to the New England region to ensure sufficient capacity to maintain system reliability in the face of future load and reliability events.

With construction not yet started, however, the commercial operation date for the project is currently reported to be later than June 1, 2021, more than two years beyond the start of the capacity commitment period in which the plant first obtained a CSO, the grid operator said.

The Clear River plant has been delayed by hearings and the developer’s search for an adequate water source. ISO-NE’s move to remove the plant from its generation stack stands to be the final nail in the coffin for the troubled plant. Word about the then-planned Federal Energy Regulatory Commission filing came as Invenergy executives debated the plant’s potential carbon emissions at an Energy Facilities Siting Board hearing on Sept. 18.

At the hearing, Conservation Law Foundation (CLF) senior attorney Jerry Elmer said the group believes ISO-NE’s request “is a fatal blow to Invenergy. If Invenergy does not do the honorable thing of withdrawing its application, CLF will file a motion to dismiss the application.”

Despite having several key permits already in hand from the New Jersey Department of Environmental Protection, developers of a proposed natural gas plant in Meadowlands, NJ, will have to prove that New York needs its 1,200 MW power plant before continuing the permitting process.

Mitsubishi Corp. subsidiary Diamond Generating Corp. (DGC) said its 1,200 MW Liberty Generating Station is needed to compensate for some of the power lost when the Indian Point nuclear facility shuts in 2021. The New York ISO, however, said it may not need additional electricity even when the 2,300 MW Indian Point nuclear facility closes because of three other natural gas plants under construction.

The New York Public Service Commission told DGC that it must submit reports showing whether it “conforms to the long-range plan” for New York’s power grid. DGC argued, however, that a certificate approved by New York officials in 2003 for a similar project would allow it to bypass that report. It still needs to secure air quality and other permits, and approval from other agencies, including the U.S. Army Corps of Engineers and the New Jersey Sports and Exposition Authority, for the project to proceed.

Meanwhile, neighboring towns near the proposed site have passed resolutions in recent weeks opposing the project, saying it would cause environmental damage without directly benefiting New Jersey. Liberty’s 1,200 MW of power would be transported via a 6.5-mile underground cable to Con Edison’s plant on Manhattan’s west side.

The plant would be “one of the largest sources of air pollution and greenhouse gas emissions in New Jersey,” according to resolutions passed by Bergen County towns including Ridgefield, Bergenfield, Fort Lee, Rutherford, Saddle Brook, Hasbrouck Heights, Little Ferry and Westwood.