Despite an increasing number of policies worldwide designed to reduce the effects of climate change, global emissions of greenhouse gases (GHG) have risen to unprecedented levels and grew faster between 2000 and 2010 than in each of the three previous decades, according to members of a science panel that works under the United Nations (UN). 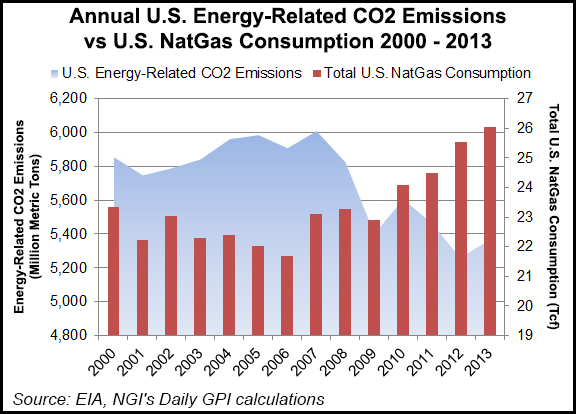 The Intergovernmental Panel on Climate Change (IPCC) added that most of the mitigation scenarios envisioned near-zero emissions for electricity production, but warned that energy efficiency was also an important factor for policymakers to consider.

“Reducing energy use would give us more flexibility in the choice of low-carbon energy technologies, now and in the future,” said Ramon Pichs-Madruga of Cuba, one of three co-chairs to Working Group III (WG3), a group of scientists that contributed to IPCC’s latest report. “It can also increase the cost-effectiveness of mitigation measures.”

The WG3 researchers conceded that estimates over the aggregate economic costs of mitigation varied widely and were sensitive to various assumptions and what model they were designed with.

“Scenarios in which all countries of the world begin mitigation immediately, there is a single global carbon price, and all key technologies are available, have been used as a cost-effective benchmark for estimating macroeconomic mitigation costs,” according to a 33-page summary of the report “Climate Change 2014: Mitigation of Climate Change,” which was released Sunday.

“Estimates at the high end of these cost ranges are from models that are relatively inflexible to achieve the deep emissions reductions required in the long run to meet these goals and/or include assumptions about market imperfections that would raise costs. Under the absence or limited availability of technologies, mitigation costs can increase substantially depending on the technology considered.”

WG3 researchers found that it would be possible to limit the increase in global mean temperature by two degrees Celsius (3.6 degrees Fahrenheit) by the year 2100 — compared to the range established from 1850 to 1900 — so long as the world’s nations agreed to change some of the their behaviors and implemented various technological improvements.

But WG3 — co-chaired by Pichs-Madruga, Ottmar Edenhofer of Germany and Youba Sokona of Mali — warned that major institutional and technological changes would be needed to avert the global mean temperature from climbing higher that two degrees Celsius.

“Climate policies in line with the two degrees Celsius goal need to aim for substantial emission reductions,” Edenhofer said. “There is a clear message from science: To avoid dangerous interference with the climate system, we need to move away from business as usual.”

According to the report, researchers looked at about 900 mitigation scenarios, with atmospheric concentration of carbon dioxide equivalent (CO2eq) in 2100 ranging from under 430 parts per million (ppm) to greater than 1,000 ppm.

“Many different pathways lead to a future within the boundaries set by the two degrees Celsius goal,” Edenhofer said. “All of these require substantial investments. Avoiding further delays in mitigation and making use of a broad variety of technologies can limit the associated costs.”

According to IPCC, “estimates of the economic costs of mitigation vary widely. In business-as-usual scenarios, consumption grows by 1.6-3%per year. Ambitious mitigation would reduce this growth by around 0.06 percentage points a year. However, the underlying estimates do not take into account economic benefits of reduced climate change.”

Last month, the Obama administration unveiled a strategy for reducing methane gas emissions from the oil and gas industry and other sources (see Daily GPI, March 28). In an earlier study, IPCC estimated that methane was 84 times more potent than CO2 as a GHG for trapping heat at the earth’s surface.

IPCC was established in 1988 by two UN organizations, the World Meteorological Organization and the United Nations Environment Program.