Fresh from a Chapter 11 bankruptcy reorganization and riding an earlier upswing in Henry Hub prices, Houston-based Ultra Petroleum Corp. has unleashed horizontal exploratory drilling in the Green River Basin in Wyoming, with at least one analyst thinking it could reawaken a basin that has seen steady natural gas production declines since 2014. 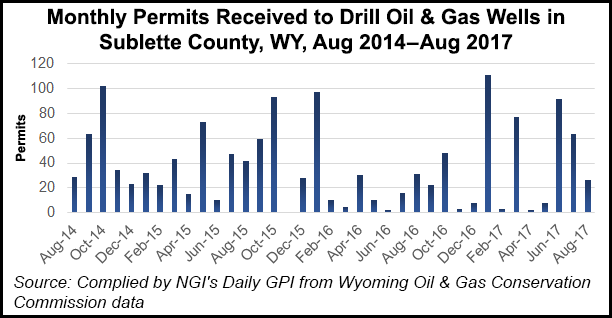 According to an analysis by Colorado-based BTU Analytics LLC issued on Tuesday, Ultra’s proposed ramp up of activity in Green River “could have implications for the future of the play,” where increases in gas prices above $3/MMBtu this year have reversed a three-year production slide.

With about 800 MMcf/d) of the basin’s current 4.2 Bcf/d production, Ultra has assigned one of its eight rigs to a renewed exploratory horizontal drilling program.

“Ultra has been the catalyst for this reversal with an average wells-drilled/month increasing to 14.5 this year from 6.5 in 2016,” said BTU’s Daniel Orenstein. However, assuming the number of sales wells developed each month, production could still tank up to 200 MMcf/d during the next 18 months “as competition from Appalachia pressures Midwest [price] differentials.”

In a worst case scenario of reverting to low 2016 prices, Green River declines could hit as high as 450 MMcf/d by the end of next year, the assessment indicated.

John Robitaille, vice president of the Petroleum Association of Wyoming (PAW) and a long-time observer of the state’s oil and gas industry, said he was unaware of “anything out of the ordinary” taking place in Green River.

“They haven’t done a lot of new drilling over there in quite a while, but I have heard that they were thinking about bringing up production a bit,” Robitaille said.

Earlier this year, another BTU analysis by Kathryn Downey Miller outlined how post-bankruptcy Ultra was planning to increase its activity based on more favorable gas prices and “a lightened cost structure.” Nevertheless, she, too, said that BTU’s forecast still calls for “continued declines in gas production out of the Green River, Piceance and Uinta basins.”

“As both the U.S. Northeast and the Permian Basin emerge as the new power centers from natural gas production, the opportunities for other gas producing basins appear limited,” Miller said. “But small niches may remain, particularly for producers in the most productive core areas or plays or with low entry costs into overlooked basins.”

In April, having completed bankruptcy restructuring, Ultra “reached the inflection point of production” and predicted 25% volume growth in 2017 and 25% annual growth in 2018.

The onshore operator completed its in-court restructuring and emerged from voluntary bankruptcy protection in March, raising $2.98 billion in exit financing to reimburse its creditors and preserve some value for equity holders. Ultra at the time also issued new common stock, added two members to its board and, through restructuring, became a leaner company with only 165 employees.