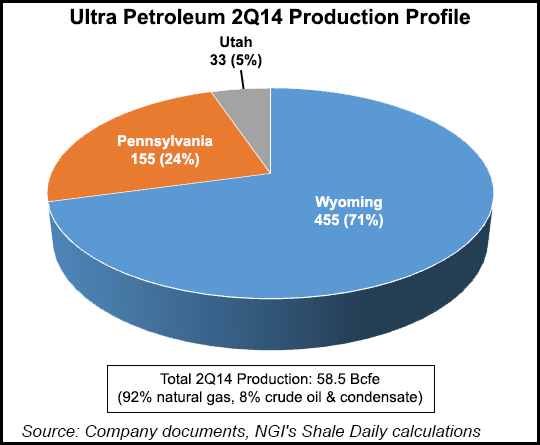 “Price discounts on our oil is decreasing, as is the basis differential on Western basin gas. Eastern basin gas differentials are expanding significantly. So on a relative basis, our margins should be improving as we enter the second half of the year…We continue to be constructive on natural gas demand going forward, particularly 2016 and beyond.”

“Our oil and natural gas production is growing again,” said Watford. “But more importantly, we are generating healthy returns.” The company’s crude oil investments are returning 400-500% internal rates of return, “with an impressive payout period of months, not years.

“In our Wyoming long-life natural gas asset, we were achieving returns of 45-80%, depending upon well size and cash flows exceeding capital expenditures.”

CFO Garland Shaw said Ultra’s gas production in the Rockies “shifted back to growth mode following our disciplined capital investment program and the under investing from the previous two years. We have shifted our investment focus away from Pennsylvania and onto Wyoming and then Utah.

“There’s no surprise we’ve experienced declining natural gas volumes. This decline is clearly behind us now with the first quarter having served as the inflection point as volumes increase in the second quarter and will continue growing for the remainder of 2014. This natural gas growth is being fueled by our Wyoming asset.”

“The continued basis widening that all Marcellus producers are currently enduring further validates our capital allocation decisions for 2014 where we’re spending virtually nothing in the region.” Across the Rockies, which accounts for nearly three-quarters of Ultra’s current gas volumes, differentials averaged a negative 26 cents/MMBtu in 2Q2014, higher than forecast.

On a combined basis, Ultra’s average natural gas corporate-wide differential to Nymex was a negative 66 cents/MMBtu for the quarter. For oil pricing in the Uinta Basin, the company realized an average discount to Nymex of a negative $18.87/bbl.

In Wyoming, Ultra and its partners drilled 28 net (45 gross) wells in the Lance formation of the Pinedale Anticline and placed on production 26 net wells. The company’s net output in the play averaged 455 MMcfe/d in the latest period. Pinedale achieved wellhead gas prices of $4.00-5.00/Mcf and estimated ultimate recoveries of $4.0-6.0 Bcfe.

The pace of Marcellus activity during the quarter slowed significantly as a direct result of strategically reducing capital at the beginning of the year, Watford noted. Ultra participated in one net well and no wells were brought online. The company averaged 155 MMcfe/d of Marcellus output in the latest period.

“Our strong well performance in the Uinta allows us to achieve payout within months,” Watford reiterated. “Currently, one-third of the wells brought online in the first quarter have paid out. With regard to the second quarter wells, we expect over half to achieve payout by the end of this year.

“Our growth in Uinta production is ongoing as evidenced by the 28% sequential growth we’re forecasting for the third quarter.”

Two “key factors” should affect Ultra’s overall production positively in the second half of the year, said Shaw. “First, we see our mix of oil production growing relative to natural gas due to our investment in our high-returning Utah asset base. Our increased oil production is expected to result in a third quarter production mix of roughly 9% of volumes and 27% of revenues.

Tudor, Pickering, Holt & Co. analysts weighed in on the results, noting that Ultra’s stock fell 24% in July, which brought it in line with their net asset valuation of about $23.00/share. Analysts cut their full-year production estimates toward the low-end of guidance, 243-250 Bcfe to account for pipeline constraints and a risk to Marcellus shut-ins during September and October.