The UK’s Department of Energy and Climate Change (DECC) launched a consultation on proposals Friday designed to improve industry’s access to oil and natural gas deposits in shale formations in exchange for voluntary payments by companies to localities affected by their drilling. 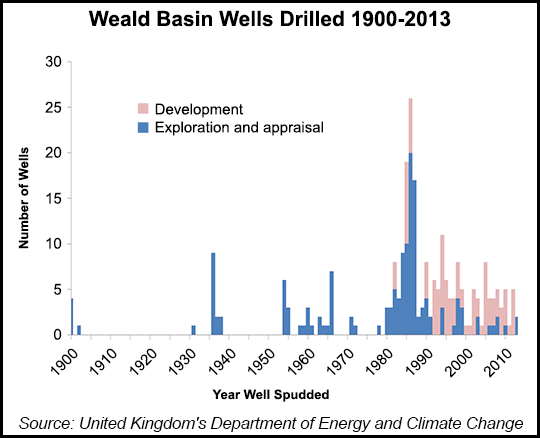 Meanwhile, DECC published a report by the British Geological Survey (BGS) that concluded the Weald Basin in southern England is unlikely to be a potential source for shale gas but could hold an average of 4.4 billion bbl of oil.

According to a 33-page report outlining the consultation on proposals, DECC said the UK government believes development of its shale resources may provide the country with energy security, growth and jobs, much as shale development has in the United States.

“We know that there are…large shale resources in the UK, but we do not yet know how much of the unconventional gas and oil in the UK is technically and economically recoverable,” DECC stated. “Ultimately, the question of whether recovery of these resources is economically viable is one for industry, but the government wants to ensure the right framework is in place to support industry and local areas as this exploration and, in some cases, production, moves forward.”

DECC proposed a three-part solution, beginning with granting underground access rights to companies extracting oil, gas or geothermal energy from a depth of at least 300 meters (984.3 feet) below the surface, although companies would still need to obtain the necessary planning and environmental permits. Under current law, operators must negotiate with each landowner above a potential drilling site. The British Crown owns all mineral rights to oil and gas.

“Landowners do not typically use the land deep below their property,” DECC said. “However, there is no need to remove ownership altogether in the case of shale or geothermal drilling, as a right of access should be sufficient, given the temporary nature of underground drilling operations. We believe it would be disproportionate to completely remove landownership below a certain depth.”

The second part of the DECC’s proposed solution is for operators to make a one-time payment of £20,000 ($33,598) for every lateral of a horizontal well that extends more than 200 meters (656.2 feet) laterally. Currently, landowners negotiate a private agreement with operators for such payments.

“We believe that people living above underground drilling should continue to receive some kind of payment from the operator in return for the right of access,” DECC said. “Our preference is for this payment to be made to a relevant community body (as agreed between the operator and the community itself), and not split between individual landowners.”

“We believe a voluntary payment system is preferable to one set out in statute,” DECC said. “A voluntary scheme can be adapted to suit any location or situation that might arise, reflecting the different characteristics of each site and community.

“In contrast, if we included a payment in statute, it would be much less flexible and we would need to determine much of the detail in advance (such as defining what constitutes a ‘community’ in such a way that it proves suitable for all possible sites in the country), making it less likely to be effective and more prone to error.”

The third and final part of the DECC’s proposal is for the industry to voluntarily establish a public notification system that would outline company drilling and payment plans.

“This notification would not be a mechanism for an individual or community to object to the project. Such objections are more appropriate as part of the planning or environmental regulatory processes,” DECC said.

The consultation period ends on Aug. 15.

In an 89-page report, BGS said no significant amount of shale gas was present in the Weald Basin, but it found five intervals in the center of the basin had a combined estimated oil-in-place range of 2.2-8.6 billion bbl, with a mid-range estimate of 4.4 billion bbl.

“Weald Basin shale oil has the potential to add to the country’s resource base, but with only limited well control and no flow testing from the basin’s shales, it is not yet possible to make an estimate of the amount of shale oil that might ultimately be produced from the basin,” BGS said.

Earlier this month, Cuadrilla Resources Ltd. announced plans to submit an application to drill and perform hydraulic fracturing at up to four test wells in northwest England’s Lancashire County, in the Borough of Fylde (see Shale Daily, May 20). The wells would target the Bowland-Hodder Shale, which BGS has estimated could contain 822-2,281 Tcf of gas, with a mid-range estimate of 1,329 Tcf (see Shale Daily, June 28, 2013).