Even amid declines associated with the Covid-19 pandemic, the United States maintained its status as the globe’s leading producer of petroleum and natural gas in 2020, a recent analysis from the Energy Information Administration (EIA) shows. 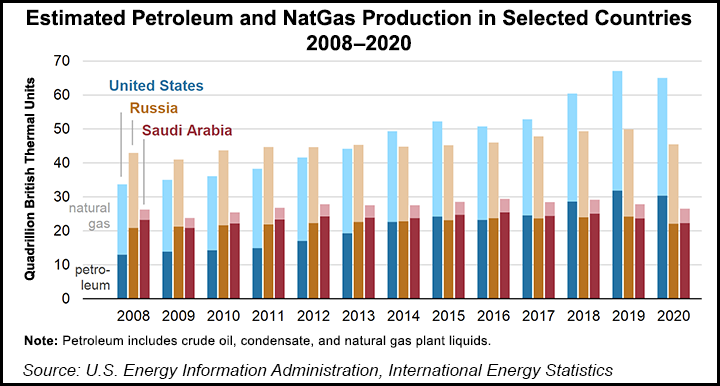 Domestic petroleum and natural gas output fell year/year in 2020 after reaching record highs in 2019, EIA said in a research note published Monday. Even so, the drop-off was not enough to unseat the United States as the world’s leading producer ahead of Russia and Saudi Arabia, a status it has held since 2014.

All three countries saw output fall in 2020 as the spread of the coronavirus and measures to contain the pathogen prompted declines in both demand and crude oil prices, the agency noted.

Russia and Saudi Arabia reduced their crude oil output as part of an agreement among the Organization of the Petroleum Exporting Countries and its allies, commonly known as OPEC-plus.

In the United States, meanwhile, “reduced production was largely the result of a price-induced fall in tight oil investments, and, to a lesser extent, unplanned outages,” according to EIA.

Crude oil and condensate output fell 1.9 quads during this period; natural gas plant liquids production increased 0.4 quads in 2020, with volumes “boosted by an increase in domestic ethane consumption and in ethane exports,” according to the agency.

Compared to crude oil, natural gas production was affected “far less” by Covid-19-related demand declines, EIA said. Agency data show natural gas output falling by less than a quad year/year in the United States in 2020, going from around 35.3 quads in 2019 to around 34.7 quads in 2020. Production from Saudi Arabia increased slightly during the same period.

“In Russia, natural gas production fell in response to milder-than-normal temperatures during the 2020-21 winter and to increases in renewable electricity generation” in the European Union, researchers said. “Natural gas production in Russia fell by 2.1 quads, nearly equal to its decline of 2.3 quads in oil production.”