The Covid-19 crisis is expected to result in a sharp pullback in global natural gas and oil investments, with Lower 48 spending falling by half year/year, the International Energy Agency (IEA) said Wednesday. 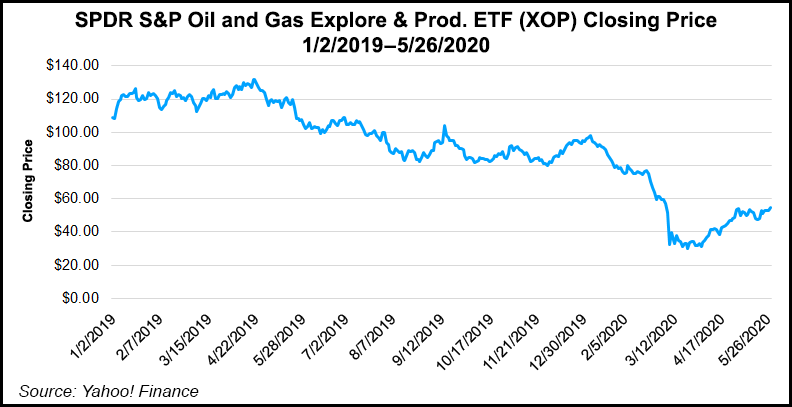 The decline in investments worldwide has“serious implications” for security and the transition to alternative fuels, the global energy watchdog said in the World Energy Investment 2020 report.

Global energy investments are forecast to decline by nearly one-third. However, the unconventional industry, centered in the United States, which was under pressure already, has seen investor confidence and access to capital dry up, with investments in shale and tight resources taking a huge hit.

“The unparalleled decline is staggering in both its scale and swiftness, with serious potential implications for energy security and clean energy transitions,” researchers said. “At the start of 2020, global energy investment was on track for growth of around 2%, which would have been the largest annual rise in spending in six years.”

Project delays and cost-cutting are seen “across all types of company and all regions, but there are some strong variations in the severity of the measures taken. The largest cuts — in many cases above 50% — have been among the independent North American upstream operators, especially those in shale. Announcements from independent companies outside North America vary quite widely but are generally lower, in the 10-25% range.

“Announced cuts by the majors average more than 25%, with ExxonMobil — the major with by far the largest announced investment spend — making the largest reduction,” with capital spend down 30% year/year. Nearly all of ExxonMobil’s spending pullback is to be in the Permian Basin.

In addition, many national oil companies “are now desperately short of funding. For oil markets, if investment stays at 2020 levels, then this would reduce the previously expected level of supply in 2025 by almost 9 million b/d, creating a clear risk of tighter markets if demand starts to move back toward its pre-crisis trajectory,” researchers said.

“The historic plunge in global energy investment is deeply troubling for many reasons,” said IEA executive director Fatih Birol. “It means lost jobs and economic opportunities today, as well as lost energy supply that we might well need tomorrow once the economy recovers. The slowdown in spending on key clean energy technologies also risks undermining the much needed transition to more resilient and sustainable energy systems.”

The report’s assessment of trends to date this year is based on the latest available investment data and announcements by governments and companies as of mid-May, tracking of progress on individual projects, interviews with leading industry figures and investors, and the most recent analysis from across the IEA. The estimates for 2020 then quantify the possible implications for full-year spending, based on assumptions about the duration of lockdowns and the shape of the eventual recovery.

“A combination of falling demand, lower prices and a rise in cases of nonpayment of bills means that energy revenues going to governments and industry are set to fall by well over $1 trillion in 2020,” researchers said.

Oil investment accounts for most of the decline. For the first time, global consumer spending on oil is set to fall below the amount spent on electricity.

Companies with weakened balance sheets and more uncertain demand outlooks are cutting back on investment, but potential projects are also hampered by lockdowns and disrupted supply chains.

“In the longer term, a post-crisis legacy of higher debt will present lasting risks to investment,” researchers said. “This could be particularly detrimental to the outlook in some developing countries, where financing options and the range of investors can be more limited.”

Power sector spending is on course to decrease by 10% this year, “with worrying signals for the development of more secure and sustainable power systems,” according to the report. Renewables investment has been more resilient during the pandemic than fossil fuels, but spend has been sharply impacted for rooftop solar installations by households and businesses, with utility-scale wind and solar projects back to the levels of three years ago.

Meanwhile, a forecast 9% decline in electricity network investments this year “compounds a large fall in 2019, and spending on important sources of power system flexibility has also stalled, with “investment in natural gas plants stagnating and spending on battery storage leveling off,” researchers said.

“Electricity grids have been a vital underpinning of the emergency response to the health crisis — and of economic and social activities that have been able to continue under lockdown,” Birol said. “These networks have to be resilient and smart to ward against future shocks but also to accommodate rising shares of wind and solar power. Today’s investment trends are clear warning signs for future electricity security.”

Energy efficiency is suffering too, with estimated investments set to fall by an estimated 10-15% as vehicle sales and construction activity weaken and spending on more efficient appliances and equipment is dialed back.

“The overall share of global energy spending that goes to clean energy technologies, including renewables, efficiency, nuclear and carbon capture, utilization and storage, has been stuck at around one-third in recent years,” researchers said. This year, investments are likely to climb to near 40%, “but only because fossil fuels are taking such a heavy hit.” In absolute terms, alternatives investments remain below levels required to accelerate energy transitions, IEA said.

“The crisis has brought lower emissions but for all the wrong reasons,” Birol said. “If we are to achieve a lasting reduction in global emissions, then we will need to see a rapid increase in clean energy investment. The response of policymakers and the extent to which energy and sustainability concerns are integrated into their recovery strategies will be critical.”