The U.S. Senate Finance Committee voted 23-3 in support of legislation extending tax credits for the use of natural gas as a transportation fuel and investment in natural gas vehicle (NGV) infrastructure. 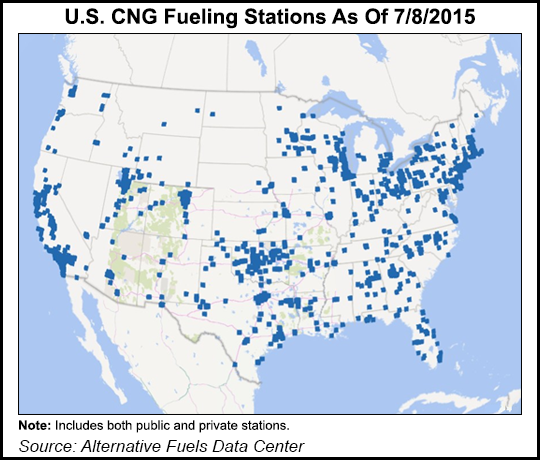 The legislation they embraced would extend the 50-cent/gallon credit for NGV fuel and the 30%/$30,000 investment tax credit for natural gas infrastructure. The credits would apply from Jan. 1, 2015 through the end of 2016.

“This extension will give a boost to current and prospective fleets considering the transition to natural gas,” said a spokesperson with Washington, DC-based trade group NGVAmerica.

In addition, the proposed legislation includes an amendment from Burr and Bennet that makes changes to correct the liquefied natural gas (LNG) tax inequity (see Daily GPI, June 30, 2014). NGVAmerica President Matt Godlewski praised the Senate committee for its “leadership to advance NGVs,” adding that if the legislation becomes law, it will be “great news for fleets.”

Separately on Wednesday, a report by Navigant Research forecast that NGV fueling infrastructure will grow at a 5.4% annual rate globally over the next 11 years. Navigant concluded that the current 23,001 NGV refueling stations worldwide will expand to 38,890 by the end of 2025.

“As fuels, CNG and LNG are typically fast and convenient to use where refueling infrastructure is available,” said Abuelsamid and Gartner, adding that natural gas deposits and production are widely distributed around the world, and with the boom in unconventional extraction technology, supplies are rising dramatically.

In the global growth of refueling infrastructure, the Navigant researchers concluded that 80% of the new facilities will support light duty CNG-fueled vehicles. These vehicles are expected to account for 90% of the NGV fleet at the end of 2025, they said.

Beyond light-duty road vehicles, there is a move to add CNG to the marine transportation sector, too, as companies like Apex, NC-based Blue Gas Marine (BGM) are targeting the high-volume gasoline outboard motor sector, as well as the diesel-fueled boats.

BGM is betting that the cost advantages for CNG for road transportation may be even more pronounced in the marine sector. Marine gasoline prices are near $5/gallon, according to BMG officials, who add that marine gasoline engines don’t have the emissions controls that road vehicle engines have.

On the road, a San Diego-based industrial gas supplier, WestAir Gases, is using both CNG and LNG in its fleet for short- and long-haul work, respectively, operating leased vehicles supplied by Ryder Systems, which has made a major commitment to alternative fueled vehicles (see Daily GPI, May 21, 2012).

WestAir currently has two LNG trucks from Ryder for its long-haul work, and 20 CNG trucks from the leasing/rental transportation firm, which is using WestAir as a case study in a promotion for fleet operators to address “volatile fuel costs.”

In recent weeks, the newsletter Fleets & Fuels reported that Ryder has said it has NGV commitments from fleet operators in more than a half-dozen states, including Arizona, Arkansas, Georgia, Louisiana, Maryland and Michigan, among others.

Meanwhile, Central Arkansas Transit Authority (CATA) on Tuesday initiated plans to convert its entire fleet of CNG vehicles with the opening of a Trillium CNG fueling station in North Little Rock, AR. The station will fuel 15 new CATA buses that the transit operator has acquired.

CATA officials said the switch to 15 CNG buses is expected to save the transit agency more than $340,000 annually in lower fuel and maintenance costs, and more than $1.26 million annually when all of the 59 buses in the fleet are converted.