Renewable natural gas (RNG) volumes and production sites increased significantly over the past two years in the United States, an assessment that comes as advocates are searching for ways to expand even further. 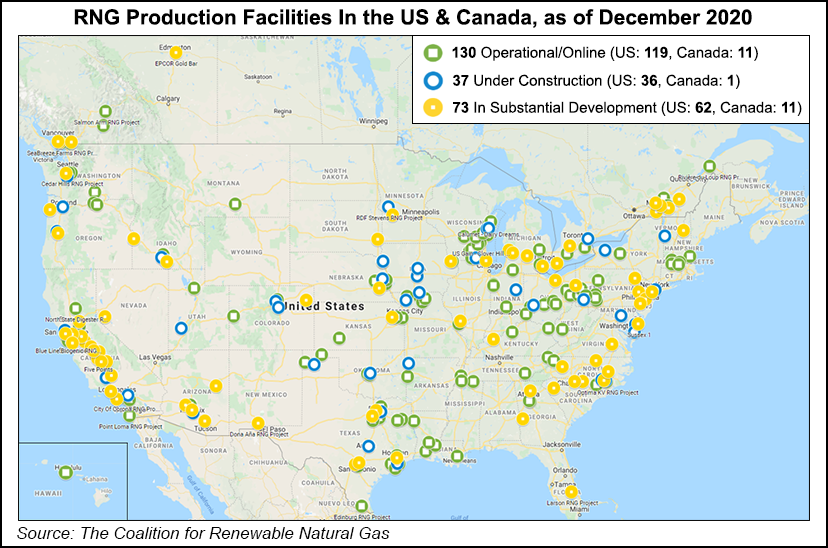 Consultancy Energy Vision LLC completed a report in December in conjunction with the Argonne National Laboratory, which found a 42% increase in production projects from early 2019 through 2020.

According to the report, there were 312 production sites nationwide at the end of 2020 with 157 facilities in operation, or 78% more than in 2019. There also were 76 projects under construction, and 79 set to begin construction by the end of 2020.

Collective RNG volumes were estimated at 59 billion Btu, or more than 530.2 million gasoline gallon equivalents (GGE) at the end of last year.

Also under construction is 9.7 billion Btu of RNG capacity, or 86.6 million GGE, according to the report..

Cox noted that Foristar is projecting the potential to produce 120 million GGE of RNG in the next three years in the United States.

“Depending on the site, value of RNG and cost to capture versus emitting,” it is “feasible that most landfills and many more farms could convert” the methane emissions and produce RNG, said Foristar managing director Chuck Bryceland. The recent data only tell part of the story, he said.

Research also has found that RNG may be compatible with hydrogen gas systems. California RNG proponents envision up to $1 billion could be invested in the industry.