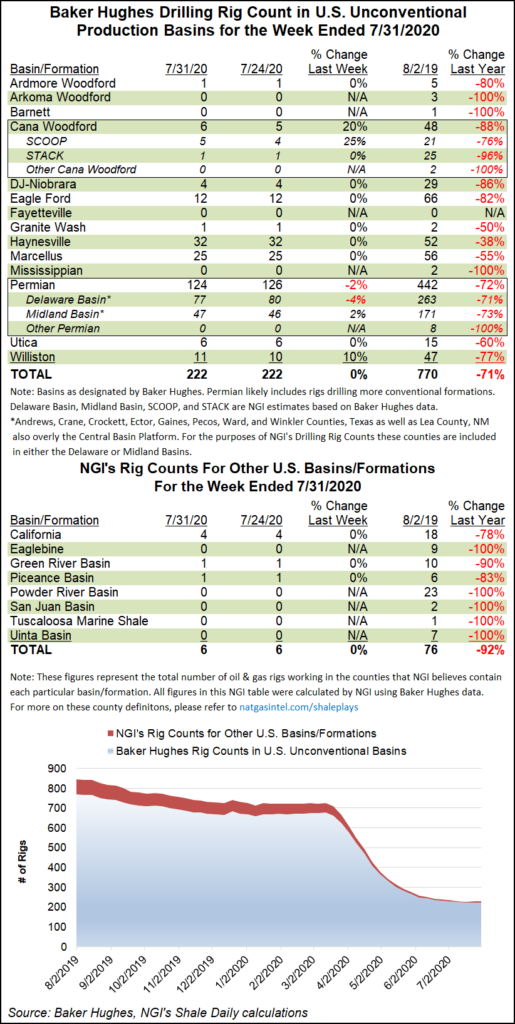 In a further sign that the post-Covid collapse in domestic drilling activity could finally be flattening out, the U.S. rig count finished unchanged at 251 during the week ended Friday (July 31), according to the latest data from Baker Hughes Co. (BKR).

A one-rig increase in natural gas-directed rigs offset the departure of one oil-directed rig for the week, putting the combined domestic tally nearly 700 units behind the 942 rigs active at this time last year.

In the United States, one horizontal rig joined the patch for the week, offsetting the loss of one vertical unit. Gulf of Mexico activity remained unchanged at 12 rigs, down from 22 in the year-ago period.

The Canadian rig count picked up three units to end at 45 for the week, versus 137 in the year-ago period. The gains included one oil-directed, one gas-directed and one miscellaneous rig, according to BKR.

That put the combined North American rig count at 296 for the week, down from 1,079 a year ago.

Among major plays, the Permian Basin saw two rigs exit during the week to drop its total to 124, versus 442 in the year-ago period. The Cana Woodford and the Williston Basin each added one rig to their respective totals.

Among states, New Mexico dropped two rigs to fall to 49 for the week, versus 107 at this time last year. Louisiana dropped one rig for the week, while North Dakota, Oklahoma and Texas each added one, BKR data show.

The 2Q2020 earnings season is well underway for the energy sector, and some operators have announced they are restoring shut-in production volumes as the industry attempts to navigate through the economic turmoil caused by the coronavirus pandemic.

North American explorer Ovintiv Inc. has brought back online substantially all of its shut-in volumes of 32,000 boe/d, including 18,000 b/d of crude and condensate voluntarily curtailed in the second quarter, CEO Doug Suttles said Wednesday.

Houston-based ConocoPhillips has begun ramping up shut-in oil and gas volumes from across North America, with most output set to be “fully restored” in September.

According to CEO Ryan Lance, the company is “monitoring the market closely to develop a view around the timing and path of price recovery and to guide our corresponding actions. For example, as the market strengthened late in the second quarter, we began reversing our second quarter curtailments and ramping up production across the Lower 48, Alaska and Canada.”

The Permian, which in recent years had been the Houston independent’s No. 1 prospect, continues to deliver “highly competitive economics,” Christmann said. However, “other areas within our portfolio offer more attractive investment options in a capital-constrained environment,” including Suriname, on the northern coast of South America.