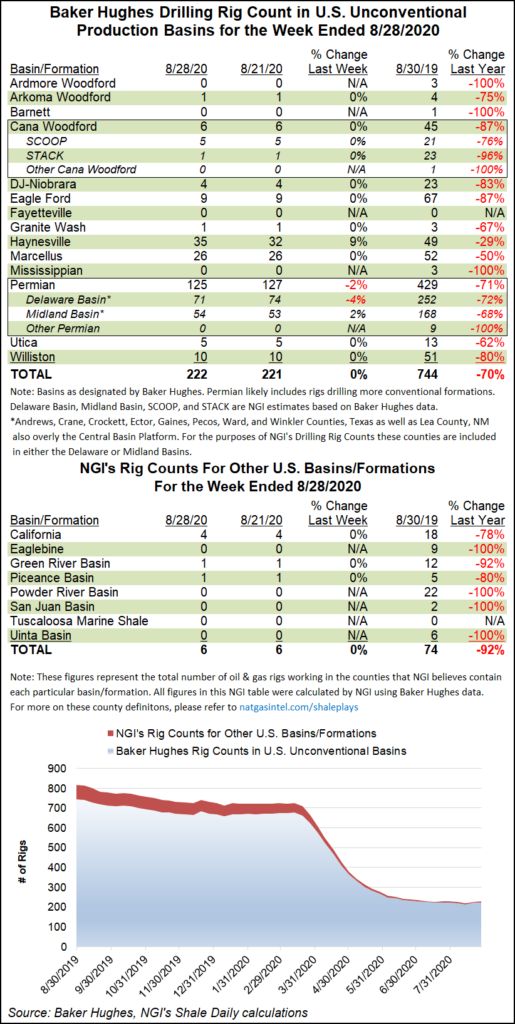 Gains in natural gas-directed drilling offset a drop in oil activity to leave the U.S. rig count unchanged at 254 during the week ended Friday (Aug. 28), according to the latest data from oilfield services provider Baker Hughes Co. (BKR).

The United States added three natural gas rigs and lost three oil rigs for the week, putting the combined domestic tally 650 units behind the 904 rigs active in the year-ago period. Land drilling and Gulf of Mexico activity were unchanged during the week, and the overall mix of directional, horizontal and vertical units was also unchanged, BKR data show.

The Canadian rig count fell two units — one oil-directed, one gas-directed — to end the week at 54, versus 150 at this time last year.

The combined North American rig count finished at 308 for the week, versus 1,054 in the year-ago period.

Among major plays, the gassy Haynesville Shale saw a notable uptick in activity, adding three units to reach 35 active rigs, versus 49 a year ago. The Permian Basin, meanwhile, dropped two rigs to fall to 125, versus 429 at this time last year.

Broken down by state, Louisiana saw a two-rig increase overall, while New Mexico and Texas each dropped one rig from their respective totals, according to BKR.

Although global oil demand has come roaring back to about 89% of pre-coronavirus levels, it is expected to plateau around 92-95 million b/d, or 92-95% of pre-Covid levels through the first quarter of 2021, according to a recent analysis by IHS Markit.

“The meteoric rise of world oil demand from the lowest lows of the Covid crash is going to come up just short of a full comeback, at least for now,” said IHS Markit’s Jim Burkhard, vice president and head of oil markets. “For demand to fully return, travel — especially air travel and commuting to work — needs to get back to normal.

“And that won’t happen until there is containment of the virus and effective vaccines.”

The market disruption from Covid-19 is forecast to unsettle long-term energy consumption patterns and heighten price volatility, with better financed operators ready to pounce on distressed Lower 48 assets, according to Moody’s Investors Service.

An extended oil price slump partly sparked by the pandemic, “will amplify disparities between stronger and weaker” exploration and production (E&P) companies. The well capitalized operators, along with the global majors, “will consolidate U.S. shale assets,” credit ratings analysts said.

The “universe of leveraged E&P companies will shrink substantially amid waning bank and investor support as a prolonged downturn further discourages debt investors from the E&P sector.”