The U.S. rig count held essentially flat for the week ended Friday (June 4), dropping one unit overall to fall to 456, including a small net decline in the Permian Basin and a small uptick in the Haynesville Shale, according to data from Baker Hughes Co. (BKR). 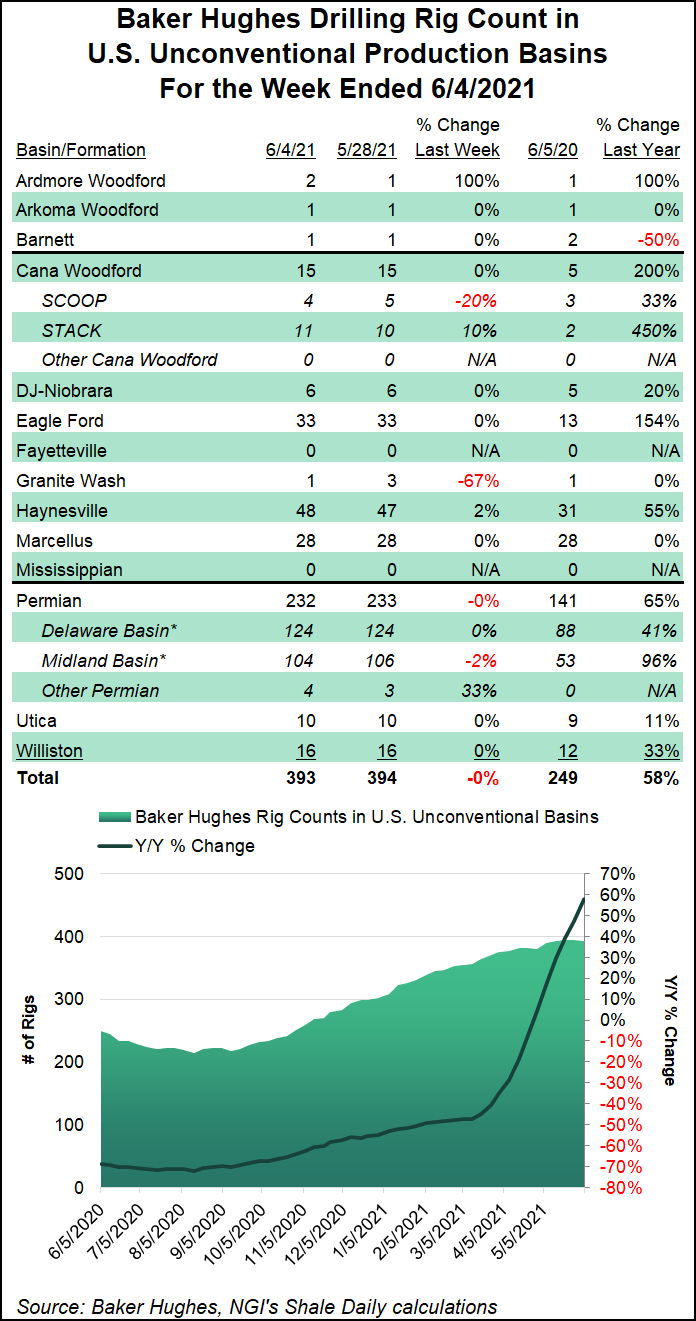 Oil-directed drilling went unchanged week/week in the United States, while the total number of natural gas-directed rigs dropped by one to 97. The combined 456 active U.S. rigs as of Friday compares with 284 rigs running in the year-ago period, according to the BKR figures, which are based in part on data from Enverus.

The Gulf of Mexico saw a net decrease of one rig to fall to 13 for the week, in line with year-ago levels. Directional rigs declined by two overall, while vertical rigs increased by one.

The Canadian rig count, meanwhile, surged 15 units higher to end the week at 77, more than triple the 21 rigs running there at this time last year. All of the week’s net gains in Canadian drilling occurred in the oil patch.

Broken down by play, the Granite Wash saw a net decline of two rigs, while one rig departed in the Permian. The Haynesville and the Ardmore Woodford each added a rig for the week.

Broken down by state, two rigs exited Texas for the week, offsetting a net gain of two rigs in New Mexico. Louisiana posted a net decline of one rig.

Earlier in the week OPEC-plus, aka the Organization of the Petroleum Exporting Countries and its oil-producing allies, vowed to further increase output in July, keeping with a plan agreed to in April that calls for the cartel to add more than 2 million b/d back into the market between May and the end of July.

The group led by Saudi Arabia and its ally Russia said it would further boost production by 450,000 b/d next month. Over the course of the three-month effort, plans are to increase global supplies by 2.1 million b/d.

OPEC policymakers cited  “clear signs of improvement” in oil demand as coronavirus vaccination programs advance, particularly in the United States, in announcing the July plan. They see demand rapidly increasing in the second half of 2021, necessitating the output increases to target supply/demand balance.