The U.S. rig count rose 10 units to 320 during the short holiday work week ended Wednesday (Nov. 25), driven by a sharp increase in oil-directed drilling, including gains in the Permian Basin and Eagle Ford Shale, according to the latest figures from Baker Hughes Co. (BKR). 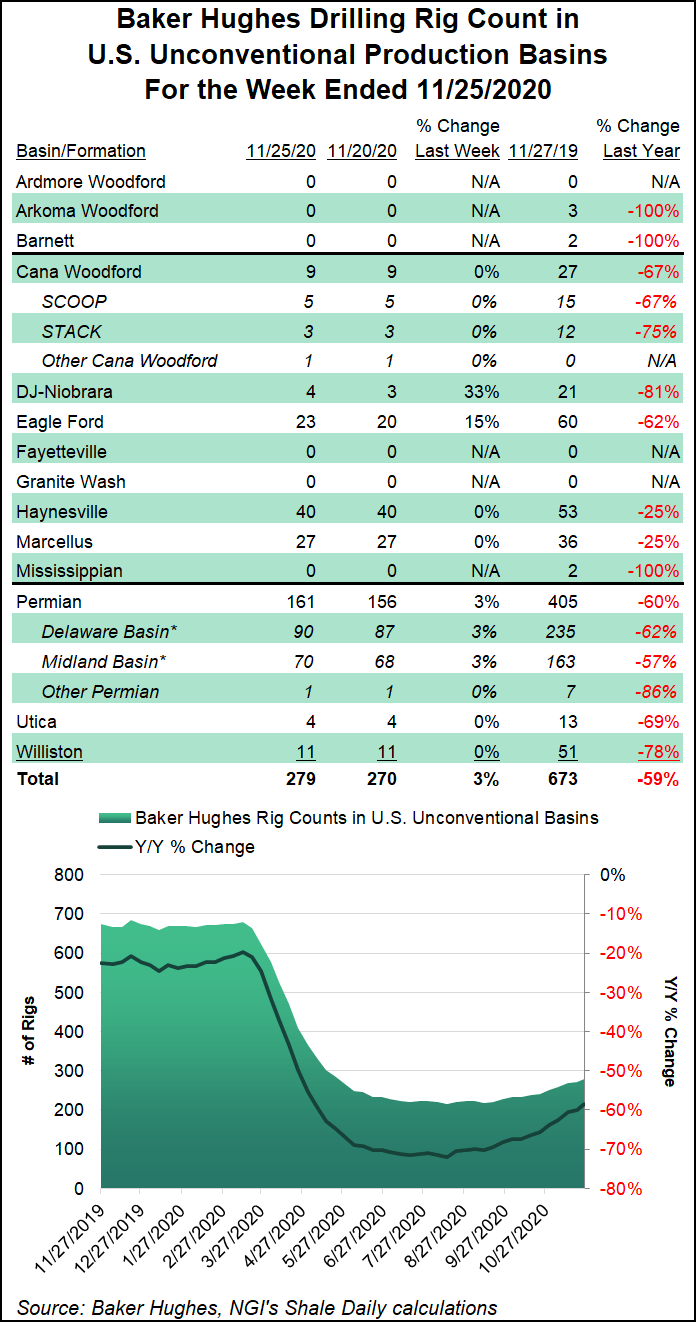 Gains in the United States included 10 oil-directed rigs and one natural gas-directed unit, offsetting the departure of one miscellaneous rig, according to the BKR numbers, which are based on data provided in part by Enverus Drillinginfo.

The combined domestic tally finished the period 427 units shy of the 802 rigs active in the year-ago period. Two directional rigs and 11 horizontal rigs were added, offsetting a decline of three vertical units. Land drilling increased by 10, while the Gulf of Mexico tally remained unchanged during the week at 12 rigs.

The Canadian rig count increased one unit to 102 for the week, versus 126 a year ago, as a five-rig increase in gas-directed drilling offset a decline of four oil-directed units.

That left the combined North American rig count at 422 for the period, less than half of the 928 rigs active at the same time last year.

Broken down by play, the Permian led the way with an increase of five rigs, upping its total to 161, versus 405 a year ago. The Eagle Ford added three rigs to climb to 23 overall, versus 60 a year ago. Elsewhere among plays, the Denver Julesburg-Niobrara picked up one rig for the period.

Broken down by state, Texas, New Mexico and California each added three rigs to their respective totals during the period, according to BKR. Colorado and Louisiana each added one rig.

As the energy industry prepared to head into a long holiday weekend to celebrate Thanksgiving, Tulsa-based Williams appeared ready to celebrate a global resolution with one of its biggest customers, bankrupt Chesapeake Energy Corp., to continue to treat and move its natural gas in the Lower 48.

Reaching a gas gathering agreement with Williams would allow Chesapeake, which filed for Chapter 11 bankruptcy protection in June to wipe out $7 billion of debt, to continue to have a reliable outlet for its natural gas production from the Eagle Ford, Haynesville and Marcellus shales, as well as the Midcontinent.

“Williams has strategically invested in large-scale and essential infrastructure necessary to gather and treat the natural gas that Chesapeake and its joint interest owners produce in the Eagle Ford, Haynesville, and Marcellus,” said Williams CEO Alan Armstrong. “Our gathering systems are necessary to realize the full potential of these high value reserves, and we are pleased to have been able to work with Chesapeake toward a mutually beneficial outcome that will put Chesapeake on a clear path to a bright future.

“Chesapeake is a valuable customer, and this transaction will both strengthen Chesapeake and allow Williams to enhance the value of our significant midstream infrastructure by bringing adequate capitalization to these low-cost gas reserves.”