Further recovery in the oil patch, especially in the Permian Basin, lifted the U.S. rig count nine units higher to 296 for the week ending Friday (Oct. 30), according to Baker Hughes Co. (BKR) data. 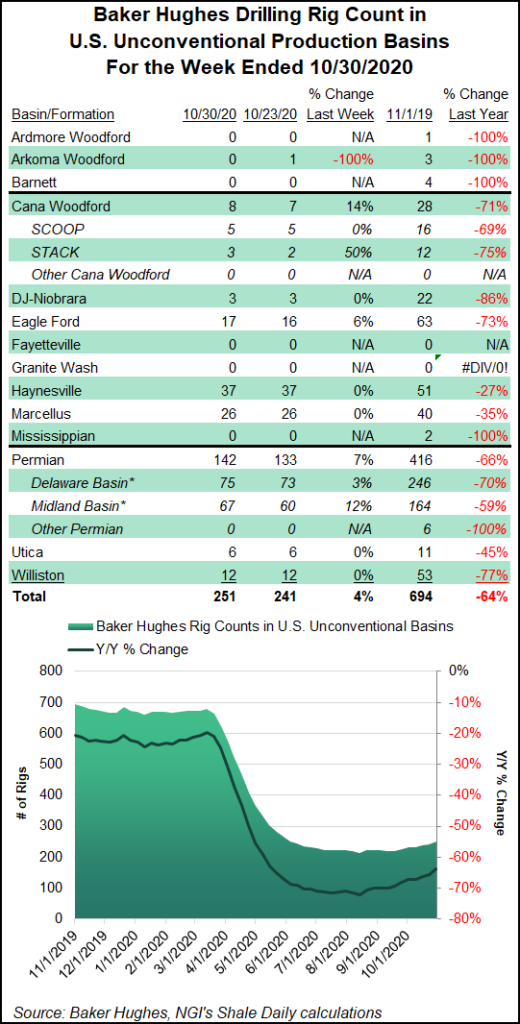 The addition of 10 oil-directed rigs offset the departure of one natural gas-directed unit in the United States for the week. The overall domestic tally ended the period 526 units shy of the 822 rigs running at the same time a year ago. The United States has now added rigs for seven straight weeks, picking up more than 40 units from a recent low of 254 recorded for the week ending Sept. 11.

All of the net gains occurred on land for the week; the Gulf of Mexico count finished unchanged at 13. Horizontal units increased by nine, while the loss of one vertical unit was offset by the addition of one directional unit, BKR data show.

The Canadian rig count picked up three rigs week/week to finish at 86, versus 142 in the year-ago period. Changes included the addition of five gas-directed rigs, offsetting a two-rig decrease in oil drilling.

The combined North American count ended the week at 382, up 12 week/week but still 582 rigs shy of the 964 units active a year earlier.

Among major plays, the increased activity on the week was heavily concentrated in the Permian, which added nine rigs overall to up its total to 142, versus 416 a year ago. Elsewhere among plays, the Cana Woodford and the Eagle Ford Shale each added a rig, while the Arkoma Woodford dropped one unit, according to BKR’s breakdown.

Among states, Texas picked up eight rigs week/week, while New Mexico gained two. Oklahoma saw a net decrease of one rig for the week.

According to a recent analysis by Rystad Energy, more than 45% of expected natural gas production in 2021 is hedged at a Henry Hub base price of $2.58/MMBtu, marginally lower than the 2020 price of $2.70. The analysis also determined exploration and production (E&P) companies have to date hedged 41% of forecast 2021 oil output at an average price of $42/bbl West Texas Intermediate.

Meanwhile, a recent string of announced mergers in the E&P space could have implications for the oilfield services sector, RPC Inc. management said during a recent conference call to discuss 3Q2020 results.

“We need to see sustained growth in the rig count, followed by higher service pricing. The recent consolidations among the exploration and production companies likely represent a headwind in that regard,” CEO Richard A. Hubbell said. “Therefore, until we see the signs that demand for our services is likely to grow substantially, we will continue to focus on expense management and limit our capital investments.”