The aftershocks of Hurricane Ida kept a lid on petroleum output and demand last week, long after the storm hammered Louisiana and production facilities in the Gulf of Mexico (GOM) on Aug. 29, the latest U.S. Energy Information Administration (EIA) inventory report showed. 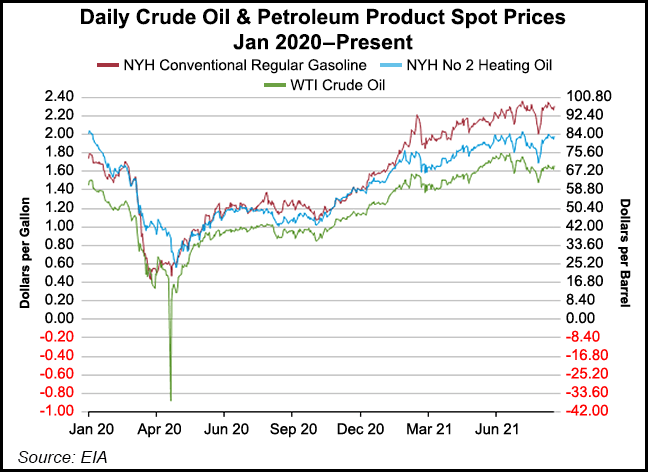 Prior to Ida, output was already more than 1.0 million b/d below the 2020 peak reached last March before the coronavirus pandemic.

Demand, meanwhile, remained subdued relative to the robust levels reported through most of the summer. Overall petroleum demand for the Sept. 10 week declined 0.2%. While a modest week/week change, it essentially held even with the depressed levels of the Sept. 3 week, when demand dropped 13% due to Ida-imposed flooding and damage that limited refinery activity in the GOM.

Outside of the GOM, however, demand has generally held strong, as more Americans get vaccinated against the coronavirus and travel increases.

Globally, oil demand in 2021 is also well above the depressed levels of last year, though the recovery has proven choppy.

Demand across the globe rose substantially last spring as vaccines were rolled out and economic activity accelerated. Momentum slowed over the summer, however, as the coronavirus Delta variant drove up infection rates and galvanized new travel restrictions in parts of the world, including heavily populated Asia.

In the wake of the Delta variant, the International Energy Agency (IEA) said this week that it revised down its full-year 2021 demand growth estimate. It now expects global oil demand to rise by 5.2 million b/d this year, down by 110,000 b/d from an August forecast.

Also this week, the Organization of the Petroleum Exporting Countries (OPEC) provided its latest estimate. Its outlook for global oil demand growth in 2021 remained unchanged from last month’s assessment at 6.0 million b/d.

Worldwide demand in 3Q2021 “has proved to be resilient, supported by rising mobility and traveling activities,” particularly in the United States and other developed economies, OPEC researchers said. “At the same time, the increased risk of Covid-19 cases, primarily fueled by the Delta variant, is clouding oil demand prospects going into the final quarter of the year.”