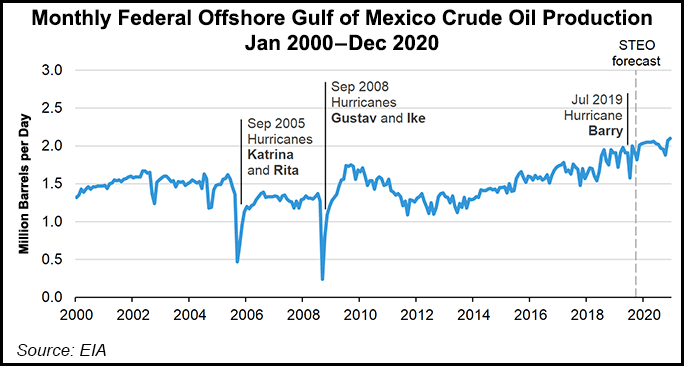 The Houston-based analyst team has reduced its U.S. crude supply forecast and expects output to hit 13.1 million b/d by the end of 2020, versus a previous estimate of 13.5 million b/d. The downward revision follows TPH’s adjusted upstream price deck for 2020 to $50/bbl West Texas Intermediate from $53.

TPH is bracing for producers’ capital allocation decisions, with its covered explorers likely to reduce expenditures by 12%, versus a previous expectation to cut spending on average by 6-7%.

There are a “growing number of operators with uncomfortable leverage profiles,” analysts said. The high-yield market has closed for a “growing portion” of its small-to-mid-cap coverage.

In addition, tighter lending standards may impact private operators in the near term “while continuing to pressure spending for a broader upstream universe over time…” The “production profiles of some operators are likely to come under pressure as financial constraints confine 2020-plus growth.”

Rystad Energy last month said an uptick in voluntary restructurings for Lower 48 producers was not a harbinger of doom. However, for the first time in three years, U.S. producers are expected to see their borrowing bases decline on a worsening outlook for commodity prices, according to a survey conducted last month of 221 industry respondents by Haynes and Boone LLP.

As of mid-August, about 26 North American explorers had filed for bankruptcy, according to the law firm, and more have filed since then.

Overall, “we do believe U.S. production growth is slowing down to some extent,” the TPH team said. However, “it doesn’t change a broader, bearish crude price thesis,” because absent more production cuts by the Organization of the Petroleum Exporting Countries, other oil producing countries including Brazil, Guyana and Norway “will produce ample volumes to meet global demand next year.”

The global oil markets withstood a “textbook case” of supply disruptions after Saudi oil facilities were attacked in September, but prices have since retreated to pre-attack levels, the International Energy Administration (IEA) said in its latest Oil Market Report issued on Friday.

IEA researchers noted that the Saudi attacks temporarily affected about 5.7 million b/d of crude capacity. On the first trading day after the fields were bombed, Brent initially spiked to $71/bbl but then fell back as “it became clear that the damage, although serious, would not cause long-lasting disruption to markets.”

The country’s ability to restore operations and maintain “customer confidence was very impressive,” IEA noted. As the OMR was published, the price of Brent was close to $58/bbl, “actually $2/bbl below the pre-attack level.”

(The OMR was published ahead of a reported attack Friday on an Iranian-owned oil tanker in the Red Sea near Saudi Arabia. Brent briefly touched $60.65/bbl early Friday but then fell back on bearish oil demand forecasts.)

“Intuitively, the precision attacks on Saudi Arabia and the possibility of a repeat should keep the market on edge,” IEA said. “There should be talk of a geopolitical premium on top of oil prices. For now, though, there is little sign of this with security fears having been overtaken by weaker demand growth and the prospect of a wave of new oil production coming onstream,” including the Johan Sverdrup project offshore in Norway this month that is expected to reach 440,000 b/d by mid-2020.

“This year is seeing two very different halves,” said the global energy watchdog’s researchers. In the first half of the year, worldwide oil growth was only 0.4 million b/d. However, the last six months could be as high as 1.6 million b/d with recent data lending support to the outlook from higher demand in undeveloped countries.

“Demand is supported by prices (Brent) that are more than 30% below year-ago levels,” IEA noted. “For 2020, a weaker gross domestic product growth forecast has seen our oil demand outlook cut back to a still solid 1.2 million b/d.”

A key lesson from recent weeks, said researchers, “is that the world has a big insurance policy in the form of stockholdings,” including from the United States. “The market is the first responder to a supply crisis, and commercial stocks from developed countries within the OECD, i.e. Organisation for Economic Co-operation and Development, increased in August for the fifth consecutive month and are now close to the record 3 billion bbl-plus level seen during most of 2016.

“We might have quickly returned to business as usual, but security of supply remains very relevant.”