Domestic oil production, fueled by tremendous growth in unconventional fields nationwide, is predicted to claim a two-year low and bottom in June at around 10.7 million b/d before beginning a gradual northward turn. 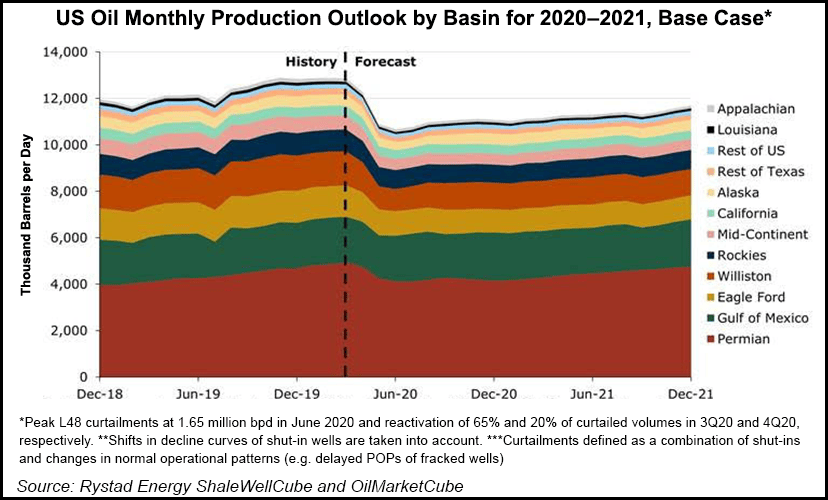 Output is expected to recover “a bit in autumn,” and should end the year at around 11.1 million b/d, researchers said.

“Next year will not be the year of salvation: despite a gradual output increase, monthly production is expected to only touch 11.7 million b/d at the end 2021,” according to Rystad’s base-case price scenario, which assumes an average $30/bbl West Texas Intermediate (WTI) price in 2020 and $39 in 2021.

“A major portion of the decline throughout 2Q2020 stems from production curtailments and not from natural decline due to the collapse in fracture activity,“ said Rystad’s Artem Abramov, head of Shale Research.

Curtailments are defined as a combination of complete/partial shut-ins of producing wells, along with revisions to standard operational patterns, such as delayed production on already fractured wells, researchers noted.

Under Rystad’s general definition, total production shut-ins, including those by private operators, should peak at 1.65 million b/d in June. Assuming no curtailments for natural decline means there may be a “significant lag” relative to the number of fracture operations already begun, which started to retreat in March. Natural decline accounts for about 520,000 b/d of the domestic decline throughout 2Q2020.

“In terms of the outlook, a material upward shift in the WTI price strip provides an economic rationale for the faster reactivation of significant curtailed volumes,” said researchers. Recent discussions with exploration and production (E&P) clients “suggest that the actual degree of flexibility allows operators to bring back most of the curtailed volumes within weeks if such decisions are made.”

The Energy Information Administration expects oil and natural gas production from seven of the most prolific U.S. onshore unconventional plays to decline in June from May, a second consecutive decline as the coronavirus continues to dent energy demand and prices. The U.S. rig count fell as of May 21 by 21 units — all oil-directed — to finish at 318, according to the latest numbers from Baker Hughes Co.

All of the declines came from the oil patch for the week, with natural gas-directed drilling holding steady at 79 rigs. The combined U.S. total ended the week 665 units behind its year-ago tally. The U.S. count has now plummeted by 474 rigs since March 13, BKR data show.

The actual cash cost level for most of the light oil wells is lower than the current prices, Rystad researchers said, “but many E&Ps prefer to wait until 3Q2020 to build confidence in improved market fundamentals. We now estimate that 65% of curtailed volumes will be reactivated throughout 3Q2020 and another 20% will be put on production in 4Q2020.”

Stripper wells, which number into the thousands across the country, may remain inactive “before WTI crosses into the low $40s,” but in any case, their contribution total output is considered marginal.

Reactivating curtailed volumes should be enough to offset the natural production decline in the second half of 2020, which is why researchers expect the bottom to be in June.

“The recovery will not be distributed evenly across major U.S. oil basins,” Abramov said. Rystad expects the Permian Basin, Gulf of Mexico and Alaska “to gain market share throughout 2020-2021.

“Yet even in the Permian Basin, we might need to wait until 2022 or a better oil price, before the basin can again achieve its 1Q2020 production record of close to 5 million b/d.”