The U.S. onshore drilling permit count bounced up during April, both month/month (m/m) and compared with a year earlier, with double-digit growth in many major plays. 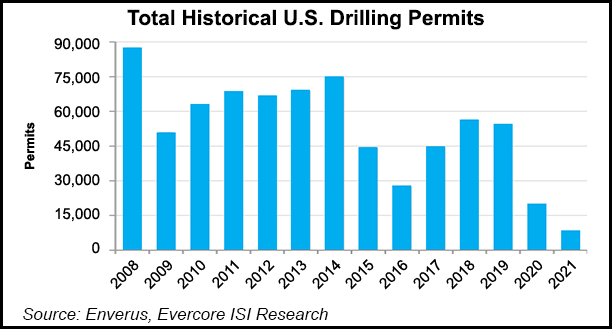 According to the monthly compilation by Evercore ISI, permitting in April jumped 19% from March and was up 13% from April 2020.

The Denver-Julesburg (DJ) Basin in Colorado “experienced a strong surge in permits, going to 117 from three in April,” said Evercore analysts led by James West. There also was “notable activity” in the Marcellus Shale, up 67% from March with a 62-permit gain.

“The Marcellus gets busy, thanks to a plethora of activity in Pennsylvania,” West said. “The state experienced its largest increase in the permit count m/m since 2018, rising to 130 permits (up 57 m/m). West Virginia also experienced a noteworthy uptick in activity, with 24 permits issued during the month (up five m/m), its highest count since April 2020.”

In the Bakken Shale, permitting rose by 42% m/m, with 20 requests. Also showing an increase was the Granite Wash formation, which had 19 more permit requests than in March, with 248% growth. The Powder River Basin’s permit requests were up 55% m/m with 19 requests.

“From a state perspective, New Mexico experienced notable growth as the permit count increased to 323,” a 233% hike m/m. Colorado’s DJ helped send the state’s count to 122 from zero permit requests in March. Utah permitting also increased, up 74% m/m with 20 permits.

Texas overall was “relatively flat” from March’s count of 997, at 1% higher m/m), but overall requests were still higher by 613 year/year.

Texas is the largest oil and gas producing state, and it routinely leads the permit count. However, West noted that in April 2020, as energy demand evaporated amid the coronavirus, a negative West Texas Intermediate oil price had “reared its ugly head…” The negative prices in turn sharply curtailed activity in the state’s largest oil producing region, the Permian Basin.

California reversed the strong permitting growth to plunge by 40% m/m in April, with 172 permit requests. Ohio permitting, centered in the Utica Shale, also declined m/m by 26% to 42.