Renewable natural gas (RNG) accounted for nearly one-third of the fuel used by natural gas vehicles (NGV) last year, according to a report by the Natural Gas Vehicles for America (NGVAmerica) and Coalition for RNG. 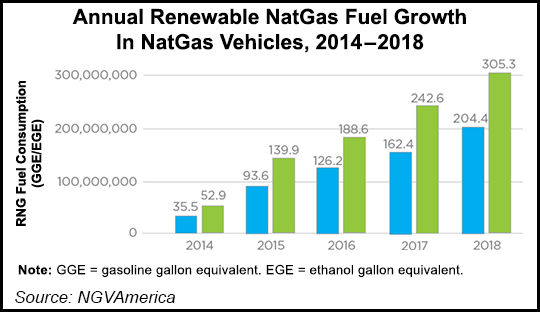 In the last five years, the use of RNG in transportation has increased by 577%, according to the report, which equates to displacing more than 7 million tons of carbon dioxide equivalent. Overall last year, 645 million gasoline-gallon-equivalents (GGE) of natural gas were used for transportation, and 204 million GGE were RNG.

Researchers said the California Air Resources Board has calculated the degree to which RNG contributes to zero-emission goals in the transportation sector, estimating in 2018 that it had an emission-equivalent-rating (EER) of minus 303.30. By comparison, California’s electric grid had a rating of between minus 25.0 and minus 38.95.

Researchers said RNG had either a net carbon-neutral or net carbon negative rating.

“And when American-made heavy duty trucks and buses use RNG they are up to 125% cleaner than the cleanest diesel technology in terms of carbon emissions,” Gage said.

In other news, the California Energy Commission (CEC) has approved a $3 million grant for Southern California Gas Co. (SoCalGas) to double the amount of RNG from wastewater treatment plants, a major source of near-zero emission byproduct.

The Sempra Energy gas-only utility is in search of the next phase of technology for producing RNG from decomposing organic material. A process called hydrothermal processing (HTP) reduces greenhouse gas (GHG) emissions by three times that of traditional anaerobic digestion and costs half as much, a SoCalGas spokesperson said.

A pilot project is planned in Martinez, CA, at the Contra Costa Sanitary District’s wastewater treatment plant backed by CEC, SoCalGas and private sector participants. Two years ago, SoCalGas was part of a consortium that identified the Contra Costa plant for RNG demonstration purposes.

Bioenergy researcher Corinne Drennan of the U.S. Department of Energy’s Pacific Northwest National Laboratory confirmed that researchers have accelerated advancement in the HTP technology to create a “continuous, scalable process” allowing the use of wet waste sewage sludge without needing to dry it.

Last month, SoCalGas committed by 2030 to replace 20% of its traditional gas supply with RNG.