Customers are more satisfied with their natural gas service than those who use electric service, according to the American Customer Satisfaction Index (ACSI). 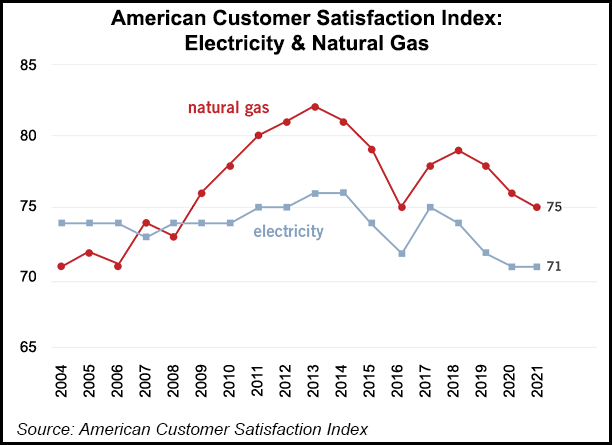 The ACSI’s Energy Utilities Report 2020-2021 surveyed 21,736 residential customers via email between January and December 2020. Even with household energy use skyrocketing for the period covered in the survey period, customer satisfaction of utilities barely changed.

Natural gas service ratings decreased by 1% to 75 on a scale of 0-100. Although only slightly higher, gas continued to outperform electricity, which remained unchanged at 71.

In mid-February, Winter Storm Uri blanketed the country and wreaked havoc on most of the Texas power grid. The Electric Reliability Council of Texas (ERCOT), which oversees the grid for about 90% of the state, said 185 generating units tripped offline amid the unprecedented freeze. Throughout the freeze, 28,000 MW of thermal generation were forced off the system, according to ERCOT. Another 18,000 MW of wind and solar were also kicked off.

“Customers interviewed throughout 2020 note that overall quality and reliability of electric service have diminished compared to 2019,” VanAmburg said. “Perceptions of value, however, are stable or slightly improved. Some might view higher bills during the pandemic as a tradeoff to savings in commuting, travel, and restaurants during lockdown.

“Another factor might be the shutoff moratoria that allowed residential customers to defer utility payments without threat of losing service.”

IOUs overall received an ACSI score of 72, matching the record low from 2016. The ACSI said  out of 25 providers, only one company improved its score by more than 1%: American Electric Power Co. Inc.

IOUs overall did not see residential customer satisfaction rates improve, according to ACSI data. Since 2018, IOUs have seen a net loss of 8% for reliability, as the industry is less able to provide reliable electric service.