The U.S. natural gas rig count slid three units to finish the week ended Friday (May 14) at an even 100, while oil drilling lifted the overall domestic drilling total higher for the week, according to data from Baker Hughes Co. (BKR). 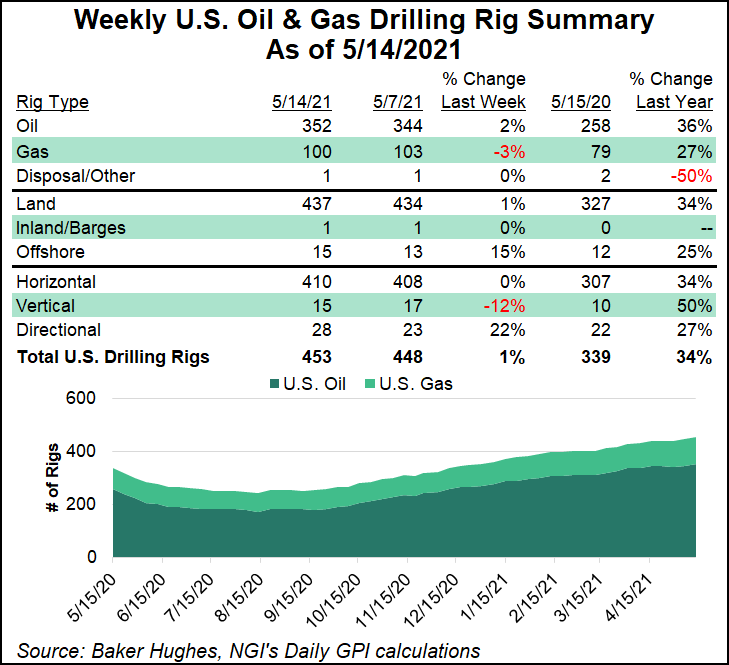 Offsetting the decline in natural gas drilling, eight oil-directed rigs were added in the United States for the week. The combined U.S. count finished at 453 rigs running as of Friday, compared with 339 rigs active at this time last year, according to the BKR numbers, which are based partly on data from Enverus.

Land drilling increased by three overall for the week, while the Gulf of Mexico saw a net increase of two rigs. Five directional rigs and two horizontal rigs were added, offsetting a decline of two vertical units, according to BKR.

In Canada, three oil-directed rigs and one natural gas-directed rig were added overall, lifting the Canadian count to 59, up from 23 a year ago.

The combined North American rig count ended the week at 512, up from 362 a year ago, reflecting an ongoing recovery in upstream activity from last year’s pandemic-induced retrenchment.

Broken down by major play, the Permian Basin added two rigs to up its total to 231, versus 175 a year ago. The Williston Basin and the Cana Woodford each added one rig, while the Haynesville Shale dropped one rig from its total.

Among states, Louisiana picked up three rigs week/week, upping its tally to 55, versus 35 in the year-ago period. North Dakota and Oklahoma each added one rig, while Texas saw a net decrease of one rig for the period, according to the BKR data.

The Energy Information Administration (EIA) in its latest Short-Term Energy Outlook, released earlier in the week, said it expects domestic crude oil production to average 11.3 million b/d in 4Q2021 and 11.8 million b/d in 2022. This comes as the agency expects West Texas Intermediate prices to remain above $55/bbl.