U.S. natural gas production has recovered more vigorously than oil since the height of the pandemic and is on track to exceed pre-pandemic growth forecasts through 2024, according to researchers at Louisiana State University’s (LSU) Center for Energy Studies. 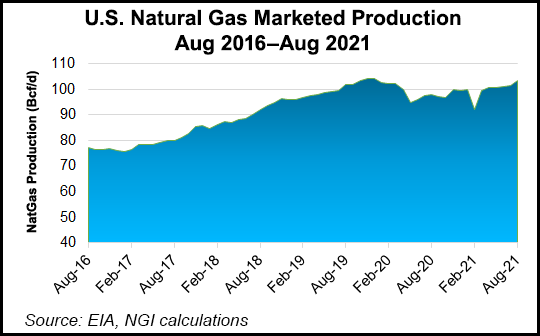 Following a pandemic-induced 25% drop in U.S. oil production between November 2019 and May 2020, oil and gas activity is on the rebound, the authors said.

However, while U.S. crude oil production in August was still 10.7% below August 2019 levels, natural gas output from March to August of this year has consistently been 2.5-3.2% above pre-pandemic levels, Dismukes and Upton said.

Production in the Gulf Coast region, defined as Texas, Louisiana, Mississippi and Alabama, has followed a similar trend to the rest of the country, with August oil output 12.1% below August 2019 levels. Gulf Coast natural gas production, meanwhile, “has returned to, but not exceeded, pre-pandemic levels,” the researchers said.

The rebound in production from gas-directed plays such as the Haynesville Shale and the Appalachian Basin has been supported by historically high prices for the molecule, Dismukes and Upton said.

The strength in pricing, in turn, has to do with the slow rate at which oil and associated gas production has recovered, the impact of the post-Covid recovery on underground gas storage levels in North America, and “the increasingly integrated nature of world natural gas markets that has been facilitated by” U.S. exports of liquefied natural gas (LNG).

“Thus, the GCEO sees it as unlikely that U.S. natural gas markets are entering into a high price/high volatility epoch comparable to that experienced in the 2000s.”

The authors said that current prices “are a good balance between being high enough to support increased drilling activity in natural gas-based plays such as the Haynesville and Appalachia, but low enough to continue to attract investment in chemical manufacturing and LNG export in the Gulf Coast region…”

Rig counts, meanwhile, recovered to 508 in September 2021, more than double the pandemic trough seen in August 2020, but “still less than half that reported in 2018 and 2019,” the LSU team said, citing data from Baker Hughes Co.

The researchers said that while they foresee a continued increase in drilling activity, they do not see it recovering to pre-pandemic levels over the forecast period through 2024.

Citing data from the Energy Information Administration’s monthly Drilling Productivity Report, the authors noted that all seven major Lower 48 shale basins covered have seen rig count increases since September 2020, ranging from a 76% increase in the Appalachian Basin to a more than 230% increase in the Anadarko Basin.

“Unsurprisingly, the largest absolute increase has been in the Permian Basin, which has experienced an increase of 240 rigs over the past year.”

In the Permian, gas takeaway constraints have led to the current planning of about 40 Bcf/d of regional gas pipeline capacity expansions through 2024, researchers said.

The Permian constraints include limited in-field gathering and processing capacity, as well as “the need for additional longer-haul transmission pipeline capacity to move natural gas out of the Permian to Gulf Coast markets,” the authors said.

Alleviation of these constraints should incentivize less flaring of gas in the region and help to narrow the basis discount of gas at the Waha hub in West Texas relative to Henry Hub, researchers said. “But whether increased flaring and Waha basis discounts are exacerbated or relieved over this next year will be determined by the speed in which production comes back online relative to these infrastructural investments coming online.”