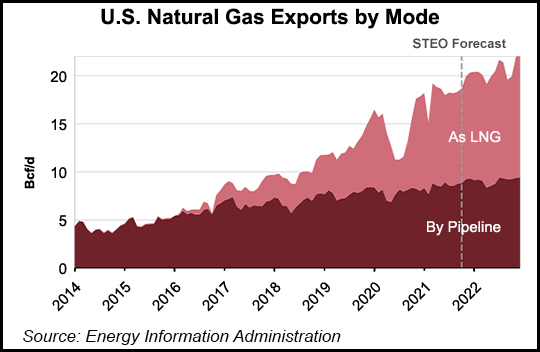 In its latest Short-Term Energy Outlook (STEO), EIA reported an average Henry Hub spot price of $5.51 for October, up from $5.16 in September and well above the $3.25 average seen through the first half of 2021.

Natural gas prices in Mexico are closely tied to U.S. benchmarks, as Mexico has become increasingly reliant on gas imported via pipeline from its neighbor to the north.

“For almost every month so far this year for which we have data, which goes through August, pipeline exports to Mexico have exceeded their three-year [2018-2020] maximum levels,” said EIA’s Corrina Ricker, lead natural gas modeler, at the U.S.-Mexico LDC Forum in San Antonio, TX, this week.

The only exception was February, when pipeline exports were impacted by Winter Storm Uri. The August total was 193.3 Bcf, or 6.2 Bcf/d.

EIA expects continued growth in pipeline gas exports to Mexico, “even though we’re not expecting additional pipeline export capacity to be built from the U.S. to Mexico in our forecast,” Ricker said. She explained, “what’s driving the increase in exports to Mexico is the development of…gas infrastructure within Mexico itself, which will boost utilization of pipelines from the U.S. to Mexico.”

Ricker said that about 98% of Mexico’s gas imports now arrive via pipelines, which have largely displaced LNG imports to the Manzanillo and Altamira terminals on Mexico’s Pacific and Atlantic coasts, respectively. The Sur de Texas-Tuxpan and Trans-Pecos/Wahalajara systems have been the main driver of this trend in terms of cross-border pipelines, she said.

Ricker said that the completion of pending infrastructure projects within Mexico such as TC Energy Corp.’s Tula-Villa de Reyes pipeline and Kinder Morgan Inc.’s expansion of its Mier-Monterrey system.