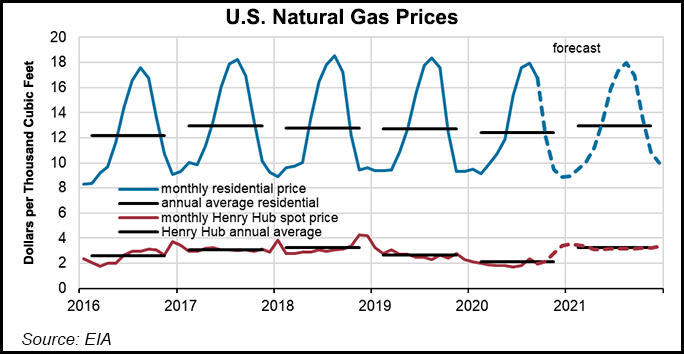 In the latest Short-Term Energy Outlook (STEO), the agency said it expects monthly average spot prices will remain higher than $3.00/MMBtu throughout 2021, averaging $3.13 for the year, up from a forecasted average of $2.07 for 2020.

Total U.S. working gas in storage ended September at more than 3.8 Tcf, 12% above the five-year average, EIA said. Inventories are expected to exceed 4.0 Tcf by the end of October, setting a record. However, researchers also said continued low crude prices would keep associated gas output from oil-directed rigs at levels lower than before the coronavirus pandemic.

Morgan Stanley analysts said production declines coupled with winter demand could create the tightest market of the past decade. The analysts said Henry Hub prices could jump to $5.00/MMBtu if weather is colder than normal.

In September, EIA said spot prices averaged $1.92, down from an average of $2.30 in August. This “reflected declining demand for natural gas from the U.S. electric power sector as a result of cooler-than-normal temperatures during the second half of September and relatively low demand for U.S. liquefied natural gas (LNG) exports amid hurricane-related activity in the Gulf of Mexico.”

EIA now is forecasting gas exports “will return to pre-Covid levels by November…and will average more than 9.0 Bcf/d” from December through February.

Gas production declines are expected to be highest in the Permian Basin, “where EIA expects low crude oil prices will reduce associated natural gas output from oil-directed rigs” The dry gas production forecast in the United States is seen averaging 86.8 Bcf/d in 2021. Researchers anticipate production will “begin rising in the second quarter of 2021 in response to higher natural gas and crude oil prices.”

“Since then, U.S. production has increased mainly because tight oil operators have brought wells back online in response to rising prices,” researchers said. However, EIA expects oil production to taper in coming months and “generally decline to average of 11.0 million b/d in the second quarter of 2021 because new drilling activity will not generate enough production to offset declines from existing wells.