The outlook for U.S. natural gas prices continues to be bleak, but some trends keep the story from being even worse, as the export market to Mexico is looking better all the time, Raymond James & Associates Inc. said Monday. 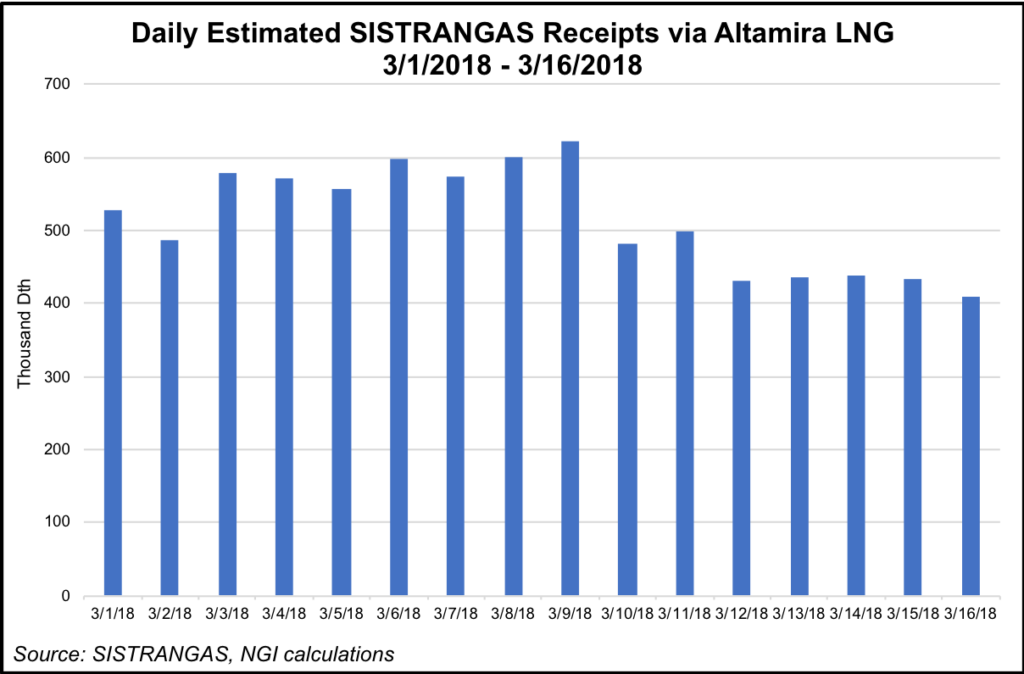 Liquefied natural gas (LNG) exports have gotten the most media attention, but pipeline sales to Mexico “have been a much more needle-moving driver” for demand, noted analyst Pavel Molchanov and his team.

Historically, most of Mexico’s gas imports were through LNG, but pipeline gas is “inherently cheaper,” Molchanov noted. Expanding U.S. infrastructure to the Texas border now is moving more gas from the Eagle Ford Shale and Permian Basin to flow south.

“While the percentage growth rate is slowing given the larger base, we project that U.S. exports to Mexico will increase to 6.2 Bcf/d in 2020, equating to a 50% increase over three years,” he said.

Mexico today produces about half of the gas it consumes, with U.S. pipeline and LNG imports covering the gap. The energy reforms not only were to encourage foreign investment but also to encourage development of unconventionals.

In that regard, Mexico has “substantial shale gas optionality,” with an estimated 545 Tcf of technically recoverable gas, said the Raymond James team. The estimate includes Mexico’s Eagle Ford acreage, which is estimated to hold 343 Tcf. Additional unconventional resources are in the southern and eastern part of the country.

Developing unconventional resources remains a low priority as the incentives are low and the risks higher, which has not changed even though state-owned Petroleos Mexicanos is no longer a monopoly, said Molchanov.

“Thus do not hold your breath for Mexico to develop a meaningful shale gas industry anytime soon,” he said.

Meanwhile, midstream operators on the Texas and Mexico sides of the border have adapted to the supply/demand scenario.

“At one point, capacity constraints south of the border were a significant hurdle, but developments in recent years have reshaped the market,” Molchanov said.

In an open season held last May to auction pipeline rights, Centro Nacional de Control del Gas Natural, or Cenagas, received support for an estimated 3.6 Bcf/d of capacity, versus the 2.2 Bcf/d available.

At least five large-scale Mexico pipeline projects are in the works, and midstreamers over the past two years have anted up another 3.5 Bcf/d of capacity from the United States to its southern neighbor.

Pipeline capacity is available and expanding, but utilization rates “remain fairly low.” Capacity additions may be bullish for Henry Hub prices. However, there are questions in the timing gas-fired power plant construction to capture more capacity.

“Why else do gas exports to Mexico matter?” analysts asked.

Meanwhile, Permian gas volumes have to find an outlet. Price differentials from the Waha Hub in West Texas to Katy, outside Houston, indicate capacity already is tight.

Existing Permian gas takeaway could be constrained before the end of 2020, “and that generously assumes that pipes to Mexico run full.”

The value of overall U.S. energy exports to Mexico in 2017 exceeded imports for the third year in a row, the Energy Information Administration said in a report earlier this month. Natural gas also is accounting for a growing share of domestic exports billing $2.6 billion in 2017 versus $2.14 billion in 2016, according to the U.S. Census Bureau.