The U.S. natural gas rig count rose one unit to 107 for the week ended Friday (Jan. 7) as domestic drilling activity increased modestly to kick off the new year, according to updated figures from oilfield services provider Baker Hughes Co. (BKR). 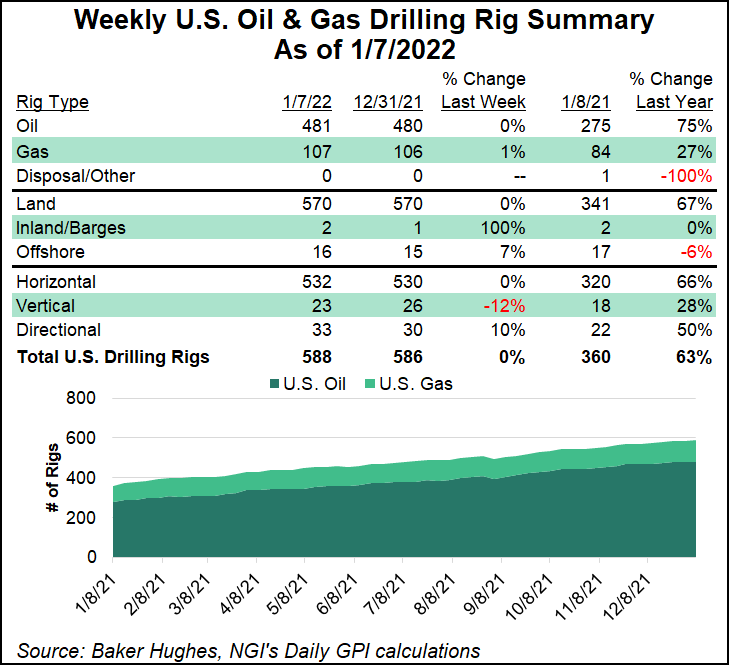 With one oil-directed rig also added for the week, the overall U.S. tally climbed to 588, up from 360 rigs active at the same time a year earlier. Land drilling held flat week/week, while one rig was added in the Gulf of Mexico, along with one in inland waters, according to the BKR numbers, which are partly based on data from Enverus.

Three directional units were added in the United States for the period, along with two horizontal rigs. Partially offsetting was the departure of three vertical rigs week/week.

Meanwhile, after posting steep losses a week earlier, the Canadian rig count recovered those losses and then some, rising 51 units to 141. Including gains of 39 oil-directed rigs and 12 natural gas-directed, the Canadian count ended the period up 24 rigs from its year-earlier total.

Broken down by major play, the Cana Woodford saw a net decline of two rigs for the week, while one rig exited in the Permian. The Denver Julesburg-Niobrara, meanwhile, picked up one rig week/week to raise its total to 12, versus five in the year-ago period.

In the state-by-state count, Louisiana picked up three rigs overall to offset a three-rig decrease in Texas. New Mexico and Wyoming each added one rig to their respective totals.

U.S. oil producers, unfazed by the Omicron variant of the coronavirus and an anticipated lull in demand between the Christmas and New Year holidays, maintained production at a 2021 peak level during the final week of the year, according to the most recent inventory data from the Energy Information Administration (EIA).

EIA said earlier in the week that domestic crude output held at 11.8 million b/d for the period ended Dec. 31. That was on par with the prior week, when production reached its highest weekly level for the year following a gradual recovery from the pandemic-induced slump of 2020. Output last week was up 7% from a year earlier.

U.S. cases of the coronavirus set a daily record above 1 million earlier in the week, amplifying concerns about the highly transmissible Omicron. However, public health officials in the United States and South Africa, where the new variant first spread widely, said the effects caused by Omicron appear less severe than prior strains. As such, analysts said, producers are tracking along with months-long recovery in demand that is expected to continue this year.