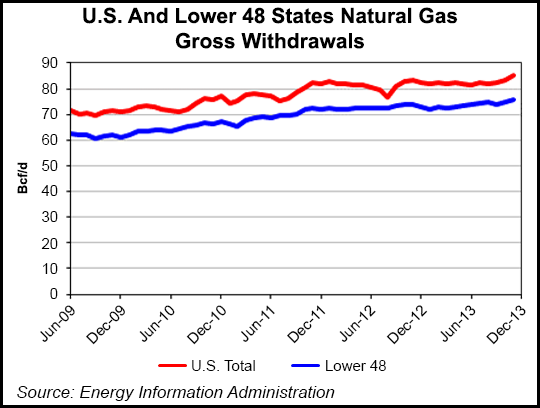 Production from the Other States category, which includes Pennsylvania, Ohio and West Virginia, was a record high 28.41 Bcf/d in November, a 4.1% increase from 27.28 Bcf/d in October and a whopping 5.02 Bcf/d more than in November 2012, according to EIA data. It was the largest volumetric increase from October in the report and came “as many operators reported new wells coming online or wells that returned from shut-ins in the Marcellus Shale,” EIA said.

Frigid temperatures could have a negative impact on production numbers in the next few EIA reports, according to analysts.

While production is expected “to remain in growth mode for the foreseeable future, the next several reports are likely to show month/month (m/m) declines, as numerous wells were affected by widespread freeze-offs across the country,” according to Barclays Capital analysts Biliana Pehlivanova and Shiyang Wang. “Pipeline flow reports point to a 1 Bcf/d m/m drop in production in December.”