U.S. natural gas pipeline exports to Mexico will double between 2015 and 2020, according to an Energy Ventures Analysis, Inc. (EVA) report commissioned by the Natural Gas Supply Association (NGSA). 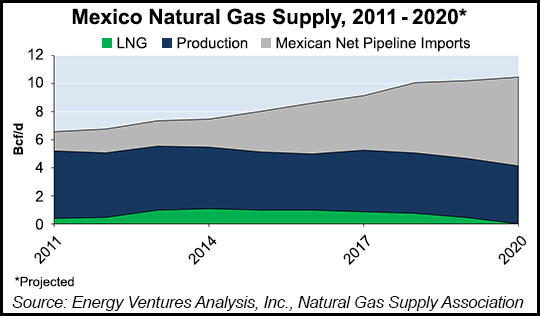 EVA offered its outlook on the growth of Mexican exports as an addendum to the 2016 summer outlook report it prepared this week for NGSA (see Daily GPI, June 1).

The low prices created by the U.S. shale revolution combined with the increased privatization of Mexico’s energy economy after the 2013 Mexican Energy Reform have been driving a “renaissance” in Mexican gas demand, EVA said.

This has led to the development of numerous pipeline projects on both sides of the border, with 13 projects under development to supply U.S. gas to Mexico and another 15 being developed to transport this gas once it’s been exported, EVA said.

“There is about 5 Bcf/d of direct export capacity currently being developed and scheduled to be operational before 2018,” EVA said. “By 2019 Mexico will have the capacity to import 9 Bcf/d. EVA expects that this high level of investment and continued expansion will double exports by 2020, up from 3 Bcf/d to 6 Bcf/d.”

One of the biggest reasons Mexico’s demand is growing is the recent push toward fuel diversification in the power sector by Mexico Comision Federal de Electricidad, EVA said.

“An increased private participation in the power sector also has led to an increase in natural gas powered combined-cycle turbines and a move away from fuel oil,” EVA said. “Mexican electricity prices already have seen a decrease in recent years as a result of the switch from fuel oil to natural gas and the increasing imports of cheap U.S. natural gas.”

“The Dollar-Peso exchange rates have meant that producing goods in Mexico is very attractive, and more and more companies are choosing to locate their factories south of the U.S.-Mexico border,” EVA said.

“The center of this growth is located in the north-central part of Mexico, in an area called the Bajio, which has become the country’s industrial heartland. A significant amount of the existing and proposed pipelines now lead to this area, which incorporates the states of Guanajuato, Queretaro, Aguascalientes and Jalisco. As a result, the manufacturing sectors, as well as the steel and chemical sectors, are demanding more and more natural gas.”

Mexico’s demand for natural gas as a feedstock for enhanced oil recovery (EOR) is also expected to increase by about 1.3 Bcf/d over the next five years, EVA said.

Meanwhile, Mexico’s domestic production has been on a slight decline since 2012, reflecting decisions by Petroleos Mexicanos (Pemex) to prioritize “low-risk, high short-term reward” investments in EOR while neglecting to invest in natural gas production, EVA said.